Again too busy for commentary so pictures only this week - apologies 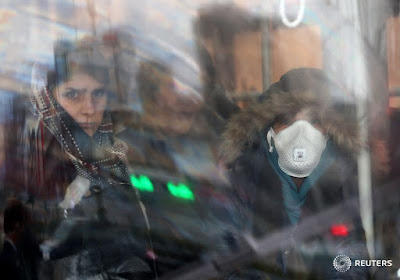 An Iranian woman wears a protective mask to prevent contracting the coronavirus as she sits in a bus in Tehran, Iran February 25, 2020. WANA via REUTERS/Nazanin Tabatabaee 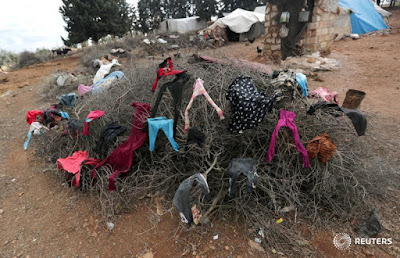 Clothes hang to dry on a cluster of branches in Azaz, Syria February 22, 2020.   REUTERS/Khalil Ashawi 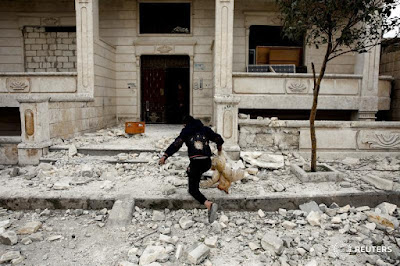 A Syrian boy removes a dead chicken from the debris of a building hit by an air strike in Idlib, Syria, February 20, 2020.   REUTERS/Umit Bektas
A 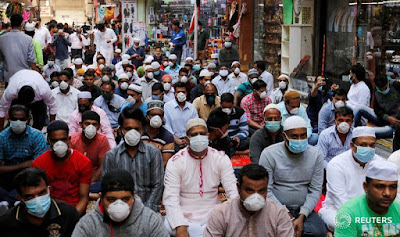 Muslims wear protective face masks following the coronavirus outbreak, as they pray on the street during Friday prayers in Manama, Bahrain February 28, 2020.   REUTERS/Hamad I Mohammed 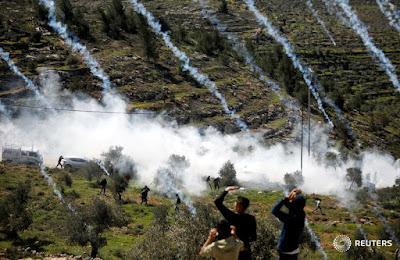 Tear gas canisters are fired by Israeli Forces towards Palestinian demonstrators during a protest against Israeli settlements and the U.S President Donald Trump’s Middle East peace plan, in Beita town near Nablus in the Israeli-occupied West Bank February 28, 2020.    REUTERS/Raneen Sawafta 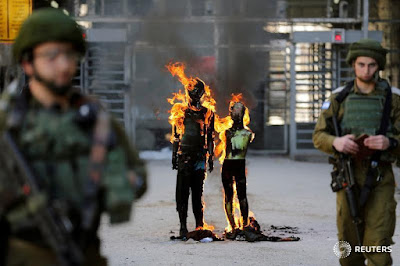 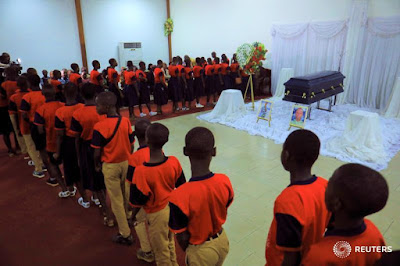 School friends of Barthelemy Laurent Guibahi, a 14-year-old Ivorian boy who was found dead in the undercarriage of an Air France plane, attend his funeral ceremony in Abidjan, Ivory Coast February 28, 2020.   REUTERS/Thierry Gouegnon 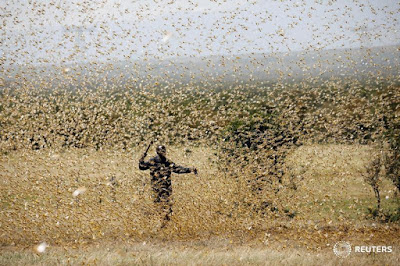 A man attempts to fend off a swarm of desert locusts at a ranch near the town of Nanyuki in Laikipia county, Kenya February 21, 2020.    REUTERS/Baz Ratner 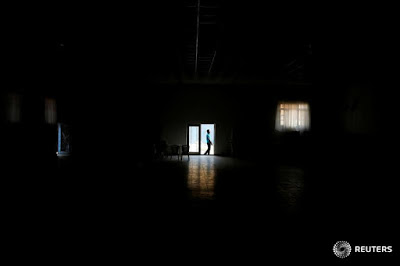 A man stands in a doorway of the Kelly Ann Hotel, the scene of an August 2018 police raid in which 57 men were arrested on charges of public display of affection with members if the same sex in Lagos Nigeria February 20, 2020.   REUTERS/Temilade Adelaja - Read on here 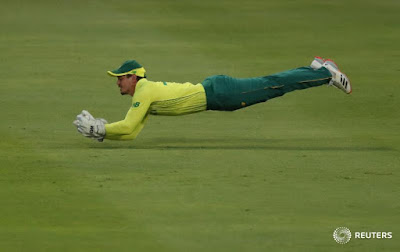 Posted by Cropperboyce at 14:18 No comments:

A powerful full-length portrait by Sumaya Hisham of Maesaiah, wife of Lesotho’s prime minster, a short while after returning from court after being accused of murder. Her outfit matching the black decorative stripes in the furniture and the yellows in the carpet gives the image a cohesive and well-composed feel. But I think what I like most about this portrait is the fact she has comfortable slippers on. That says to me she’s at home relaxed, but she still has her hat on so she’s not been home long.  Read on here 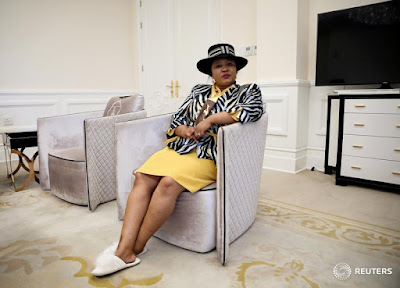 Harsh light and a harsh out-of-focus diagonal of a rifle barrel that cuts across the regular pattern of the seated troops in Andreea Campeanu’s picture gives it a feeling of unease. In your mind’e eye, remove the rifle barrel and the tension in Andreea’s clever image is removed too.  Read on here 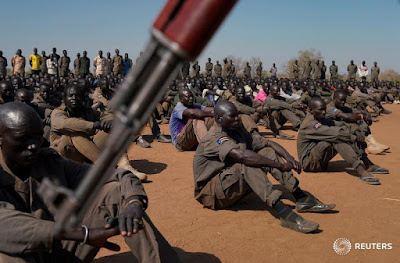 Temilade Adelaja’s sombre picture of a tuk-tuk driver illustrates the ban on the vehicles that has hit the city’s transport system and the drivers who make a living from the trade. I can’t shake the feeling of a sense of a nod to Pop artist Roy Lichtenstein as if all that is missing from this image is a thoughts bubble coming from the driver’s head. Maybe it’s the striking yellow and blue in the image – what do you think? 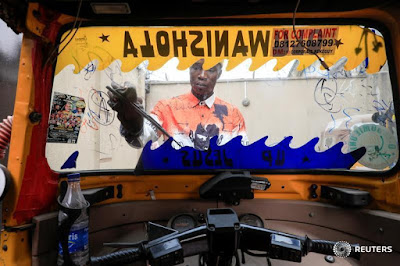 Khalil Ashawi’s image has me emotionally confused and I can’t help feeling guilty when I look at it. I examined why. On one hand it’s an image of girls posing for a portrait, brightly coloured clothes, newly applied makeup, a gentle smile with relaxed and friendly eye contact, a picture of hope when much must feel bleak in this IDP camp. But look closer. The girl in the centre has a muddy mark on her face, make-up applied without washing her face. I assume water, let alone warm water for washing, is scarce. The girl on the right looks cold, cuffs pulled down over hands clasped together for warmth. The background is mud. I feel the warmth in the fact they still find joy in their friendship and their game of applying make-up. On the other hand, I feel guilty as I fear the situation for these children seems so hopeless. Thankfully Khalil is there to show this plight through his photography and maybe more people, and not just me, feel this angst.   Read on here 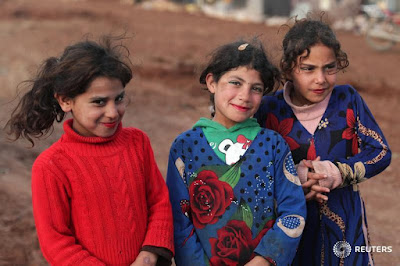 I have added this second image from Khalil Ashawi so you get a sense of where these girls are living. 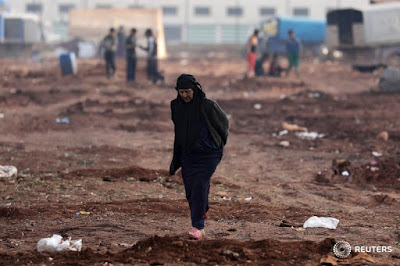 Mohamed Salem’s picture is just beautifully lit. Even though it’s quite small in the frame your eye is drawn immediately to the face of the boy, the catch-light touching his eye. Slowly you are drawn away from him, keeping warm under blankets, and notice the holes in the corrugated iron walls and the rough hewn wood until at last you see the three other children in the foreground. 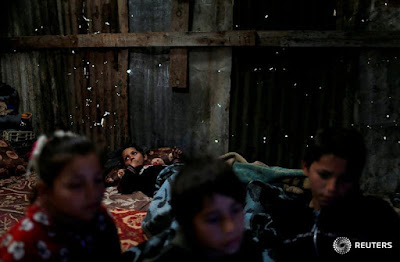 A Palestinian boy lies on a blanket placed on the floor at his family house on a rainy day in the northern Gaza strip February 19, 2020.   REUTERS/Mohammed Salem

A slightly bizarre image by Essam al-Sudani of tonal contrast and visual confusion. One person is dressed in white, fully covered head to toe, and is touching another person who is fully covered from head to toe in black, except for her face. It takes a little while to work out what is going on. At first the metal cylinder looks like part of the frame structure she is walking under until you realize it is pots she is carrying on her head. It’s only then you look carefully at her face and realise what an affectionate picture of a strong and stoic woman this is. Not only is she having to carry all these heavy supplies, she also has to wait in line to have her temperature taken to check that she is not sick. An Iraqi medical staff member checks a passenger’s temperature, amid the coronavirus, upon her arrival to Shalamcha border crossing between Iraq and Iran, February 29, 2020.   REUTERS/Essam al-Sudani

Posted by Cropperboyce at 09:04 No comments: