In my mind it's often a detail picture that can really tell a story, this I think never truer than in Afolabi Sotunde's picture of the upturned meal from the girl's school in Dapchi. To me the wasted meal in a place where little goes to waste screams of panic, fear and ultimately loss. Afolabi has been working on and following up on the story about the missing 110 girls that can be seen here in full. 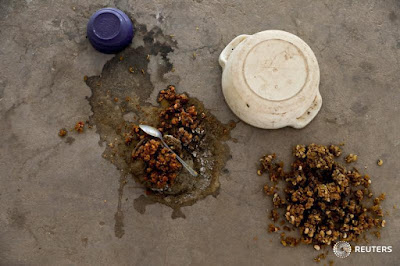 Last meal served to students before an attack by suspected Boko Haram insurgents, lies on the ground at the Government Girls Science and Technical College in Dapchi, the northeastern state of Yobe, Nigeria, February 28, 2018.   REUTERS/Afolabi Sotunde

Looking at Mohamed Torokman’s picture I feel like I am waking on eggshells. I almost dare not look as the bright coloured and back-lit balloons seem dangerously squeezed between the grey wall and the razor wire, a single touch will burst them. 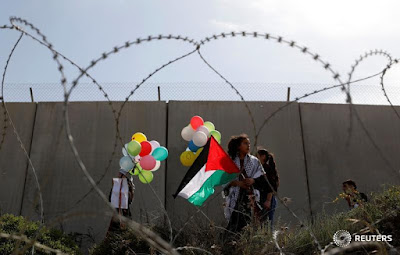 Demonstrators hold balloons during a protest marking the 13th anniversary of a campaign against the Israeli barrier, in the village of Bilin, in the occupied West Bank march 2, 2018.  REUTERS/Mohamad Torokman

Hand on hips in a landscape of devastation, a hotel security officer seems to me to be dwarfed and overwhelmed by the destruction around him in Feisal Omar’s picture. The low angle of the camera takes us into the scene where nothing has been left untouched by the explosion. Even the building in the background seems to have a tilt to it. 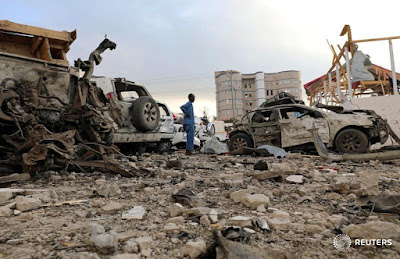 A security officer from Doorbin Hotel assesses the debris after a suicide car explosion in front of the hotel in Mogadishu, Somalia, February 24, 2018.   REUTERS/Feisal Omar


A striking mix of strong light, dark clothing, large beards and paneled wooden doors all come together to draw us into Amir Cohen’s graphic picture that is built up of dark shapes and highlighted detail. To me the figures look like they are a stone relief that has suddenly come to life while retaining a feeling of two dimensions as if the transition is only half complete; the strong shapes of the hats, the dark shadow under the eyes and noses, the chiseled grey beard of the man in profile and behind them the glimpsed faces seen over shoulders combine for dramatic effect. 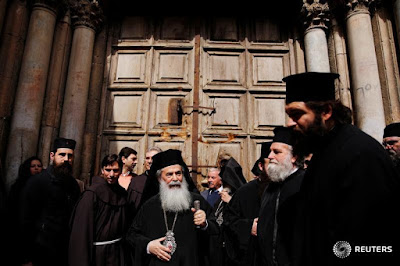 Greek Orthodox Patriarch of Jerusalem, Theophilos III stands with other church leaders after a news conference in front of the closed doors of the Church of the Holy Sepulchre in Jerusalem’s Old City, February 25, 2018.   REUTERS/Amir Cohen


At first glance the beautiful minaret seen against blue skies with white clouds drifting across Bassam Khabieh’s picture lulls you into a momentary belief this is a simple cityscape. Your eye is then suddenly snapped into focus with an unpleasant surprise as you spot the smoke drifting through the back of the image and you notice that every building in the foreground is damaged. This is a rare look at Ghouta’s skyline  -- normally we see it from ground level or underground, where terrified children huddle in a bomb shelter. More of Bassam's images here 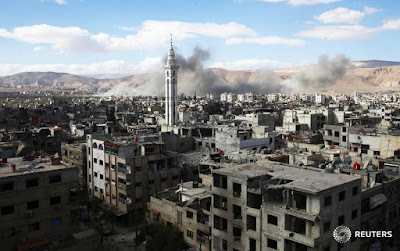 Smoke rises on the horizon of the besieged eastern Ghouta in Damascus February 27, 2018.   REUTERS/Bassam Khabieh 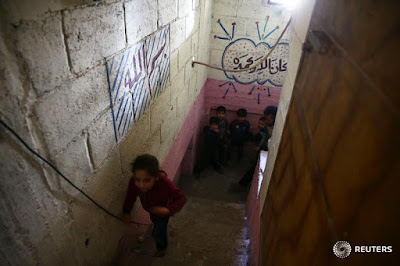 Children are seen in a shelter in the besieged eastern Ghouta in Damascus February 27, 2018.   REUTERS/Bassam Khabieh

Up go the shouts and voices of successful protesters as they carry a cross through the narrow streets of the Jerusalem’s Old City in Ammar Awad’s picture as Israel reverses a tax plan decision that would have hit the Church. To me the mass of people seems to swirl down the narrow passage like a rush of dark floodwaters barely contained in grey banks, the cross bobbing about like a ships mast in a storm, the ‘sailor’ in the crow’s nest holding on for dear life. 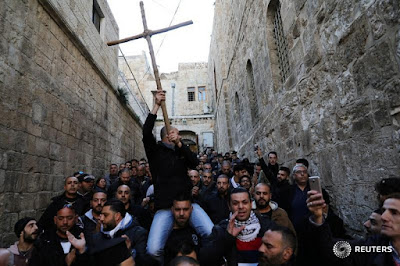 Worshippers shout slogans during a protest near to the closed entrance to the Church of the Holy Sepulchre in Jerusalem's old City February 27, 2018.    REUTERS/Ammar Awad


The phrase expect the unexpected is in my head most days and this visual readiness was affirmed when Amir Cohen’s picture of a boy dressed as a clown in a library dropped onto the wire. It’s not so much the costume, as this traditional during Purim, it’s the black and gold coloured background, the serious, somber downward look of the boy that contrasts with the bright colour and gaiety of his dress. The cross of the bookshelves brings your eye to the boy’s eye. From this point you look outwards, finally settling on the blue hat. 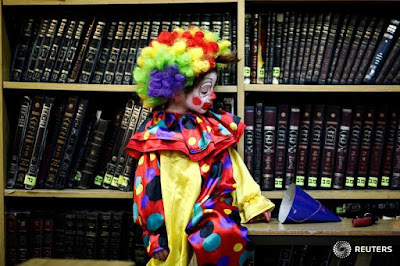 An Ultra-Orthodox Jewish boy dressed in a costume takes part in the reading from the Book of Esther, a ceremony performed on the Jewish holiday of Purim, in a synagogue in Ashdod, Israel, February 28, 2018. REUTERS/Amir Cohen