A provocative image by Ibraheem Abu Mustafa works well in the visual simplicity of its composition, leaving no-one in any doubt as to these protesters’ feelings about U.S President Trump. In my mind this crop has been well paced: too tight and you lose the sense of the weight of many people, too loose and you lose the details of the tears and folds in the face. 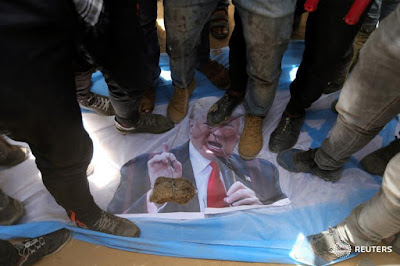 Palestinian demonstrators step on a representation of an Israeli flag and a poster of U.S President Donald Trump during a protest demanding the right to return to their homeland, at the Israel-Gaza border in the southern Gaza strip April 13, 2018.   REUTERS/Ibraheem Abu Mustafa

At first look Ammar Awad’s picture is that of an idyllic scene, a perfect blue-green sea  stretches to clear blue sky, white crested waves gently roll onto a golden beach, a single person enjoys the warmth of the sunshine on what appears to be an exclusive beach. It’s only when you read the caption that the scream of a siren marking the death of millions in the Holocaust can be heard. The picture, to my mind, changes from that of peace to mourning, underlying the power of pictures with words and words with pictures. A slide show of images from the two-minute remembrance can be seen here. 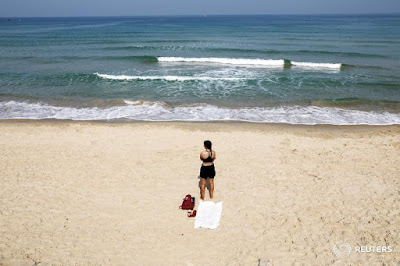 The message is very simple in Siphiwe Sibeko’s striking portrait ‘Rest in Peace mother Winnie’. In complete contrast to the image above, no caption is needed as everything is there: the strength and beauty of the face framed with the nation’s colours, the eyes looking directly at you and the bold message on her face. The nation mourns for Winnie Mandela, considered by many to be ‘the mother’ of modern South Africa. More pictures from the memorial service can be seen here. 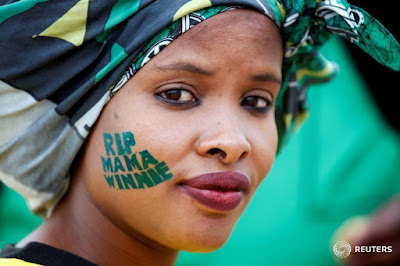 A sea of hands and faces crush closer to try to touch a symbolic casket in Khaild Al-Mousily’s picture. I get a strange sense of heat and energy as the casket seems to hover above the pilgrims in a surreal manner, like an out of scale and out of context object that has been cut out and dropped into a picture of hundreds of people. All lines of the hands and arms focus our attention on the centre, visually emphasizing the importance of the act of mourning. 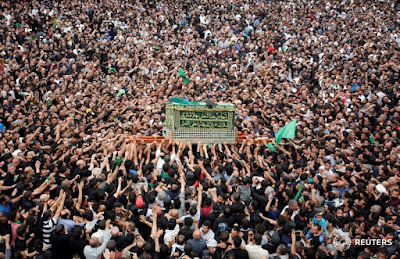 A very gentle image by Reem Baeshen that has just been published on the Wider Image, the story, about a woman photographed by a woman, took a long time to pull together and can be seen in full here. What to me is special about this particular picture from the story is that I get the abstract sense that the woman on the right is freeing birds that seem to fly away from her and then circle back, as if encouraging the woman on the left to join her. I think the light bleeding in from the left to the right of the picture adds to the circular ‘compositional flow’ of the picture. Or maybe it’s just the peaceful feel that draws me in and sets off my imagination, I can’t quite decide. The whole story here 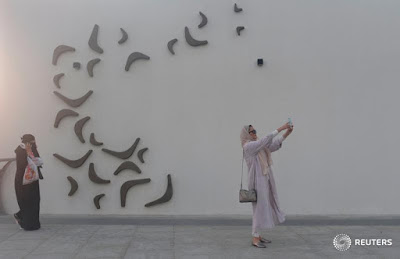 First, all I see in Suhaib Salem’s picture is the tranquil face of dead Yasser Murtaja, the touch of his colleague’s hand on his body and then the mourner’s face, wet with tears and contorted with grief. As I’ve said before I always look at the faces of the dead at these funerals; I want to remember. I then notice the word PRESS on the flak vest laid out on his body and it’s only then I made the connection to the second image below. I can’t shake the look in Yassers’s eye in Ibraheem Abu Mustafa’s picture as he stares straight at me out of his shadow, dying after being shot while taking pictures at the clashes, wearing his PRESS vest. It seems that I now look at the faces of dying as well as the dead. 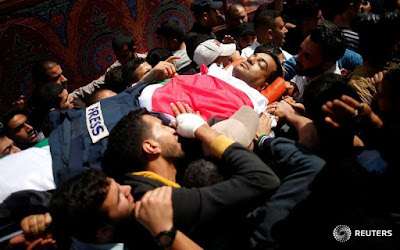 Colleagues of Palestinian journalist Yasser Murtaja, 31, who died of his wounds during clashes at the Israeli-Gaza border, carry his body during his funeral in Gaza City April 7, 2018.  REUTERS/Suhaib Salem 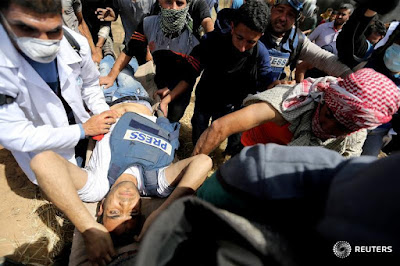 In a perfect world I would like to see the figure in Afolabi Sotunde’s just slightly to the right so the man’s shoulder is just clear of the bridge in the background. But our world is far from perfect so I am very happy with the strong zigzag composition that zooms you to the furthest horizon on the top right of the picture, and the slow movement of the workers with buckets of sand on their heads that brings you back to the foreground, bottom left. The standing figure in the centre is the fulcrum around which the whole picture balances. 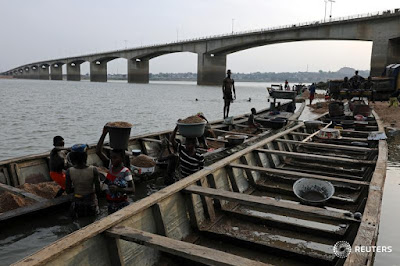 Workers carry sand on the banks of the Benue River in Benue, Nigeria, April 11, 2018.   REUTERS/Afolabi Sotunde

Feisal Omar’s picture is a brutal image of death, but I find myself asking why it’s not as disturbing as many of the images I look at. I am not shocked, saddened or disturbed, despite the fact that half the image is of a dead body – very ugly. This picture doesn’t read like that - why? Is it the fact that there are no pools of blood and gore? Or maybe because the face of the dead man cannot be seen so he has become anonymous. This is a dead attacker in military uniform, not a face that can be identified as a son, father or brother. Also, could it be because other people in the picture are casually sweeping up the debris in the street as if sweeping the steps to a function hall, seemingly oblivious of the corpse? 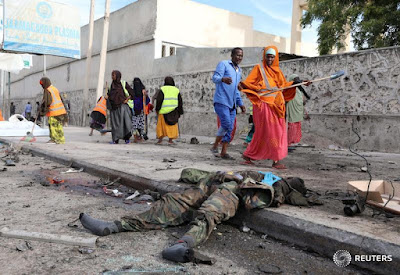 Civilians walk past the dead body of a suspected unidentified attacker at the scene of an explosion at a security checkpoint in the Hodan district of Mogadishu, Somalia April 6, 2018.    REUTERS/Feisal Omar

Adding this for no other reason than Mohammed Salem's picture is just a great picture of a captured moment. 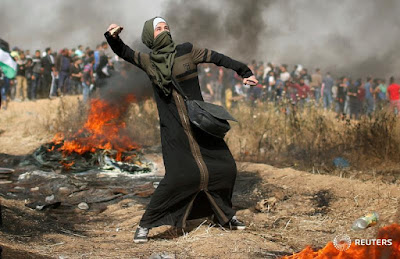 A girl hurls a stone during clashes with Israeli troops at a protest where Palestinians demand the right to return to their homeland at the Israeli-Gaza border, east of Gaza City April 13, 2018.   REUTERS/Mohammed Salem