I love the strong diagonal composition of Thaier al-Sudani’s picture, which seems to pivot around the light-coloured headdress of the man in the centre. As your eye moves to the top of the frame you are rewarded with a break in the strong line, al-Hakim leading the prayer. It’s not often I would like to see video from a scene that has been well photographed but I would love to see the left to right movement of the line of worshippers. Maybe it’s the wide-screen 16 x 9 proportions of the crop that puts this in my mind.

Ammar al-Hakim, leader of the Hikma Current, leads prayers for the Muslim festival of Eid al-Fitr at his headquarters, in Baghdad, Iraq, June 16, 2018.    REUTERS/Thaier al-Sudani


Muhammad Hamad’s picture almost makes me feel breathless as it’s so busy. I love it that I feel I have to fight my way through a visual crowd of arms, hands, microphones and even the background wallpaper to finally get to the speaking PM al-Razzaz . Once there I feel that I am trapped in a small, almost claustrophobic space, immersed in a sea of wonderful colour and warmth. 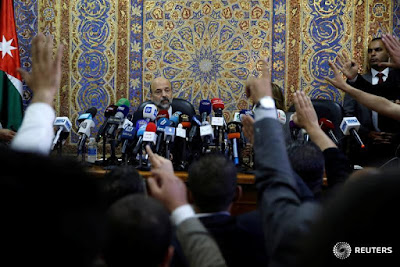 
There is a dream-like quality to Amir Cohen’s Eid al-Fitr holiday picture, thanks to a complex combination of elements that would normally send a picture to the spike. But the flare, over-exposure and back focus all work together with Amir’s great composition of figures. 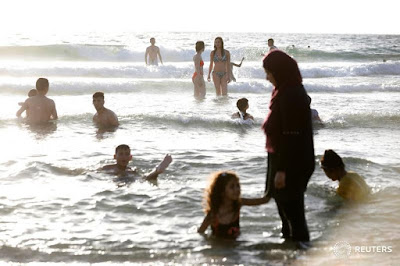 People enjoy themselves along the shore of the Mediterranean Sea during the Muslim holiday of Eid al-Fitr at a beach in Tel Aviv, Israel, June 17, 2018.   REUTERS/Amir Cohen

Ahmed Jadallah was given exclusive access to the Aramco driving school for women in Saudi Arabia, where hundreds of women are preparing for the historic day on June 24, when they will be allowed to drive in Saudi Arabia. It’s not an easy story to photograph. Ahmed’s simple picture of pupil and teacher discussing mirror position is essentially a detail picture; hands, eyes and profile of the women’s faces that for me tells the whole story. You can see the rest of the story here 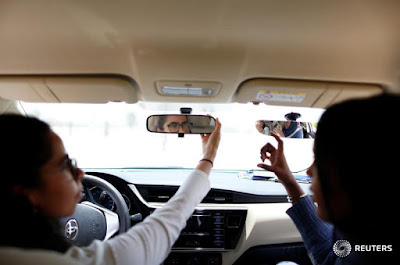 The half-open door and the plastic sheeting seems to wrap around the scene of grief like a cold embrace as boys huddle together looking for warm comfort in Mohammed Salem’s powerful and distressing image. Their hands and arms seems to claw through the picture, the open mouths and faces wet with tears leave us in no doubt about the extent of their grief. I hear the cries and screams ringing in my ears. A very sad picture. 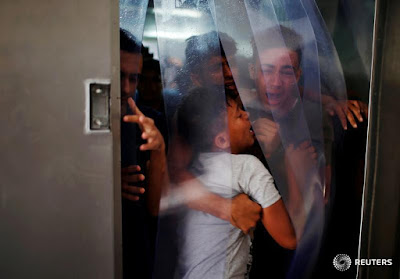 Relatives of a Palestinian, who was killed at the Israel-Gaza border, react at a hospital in Gaza City June 18, 2018.   REUTERS/Mohammed Salem


I am encroaching on another patch but can’t resist including Christian Hartmann’s fun picture of Senegal fans at their game against Poland at the World Cup in Russia . These guys have taken a lot of time to coordinate not only what they look like but where they stand. Their efforts were rewarded with a 2-1 win. 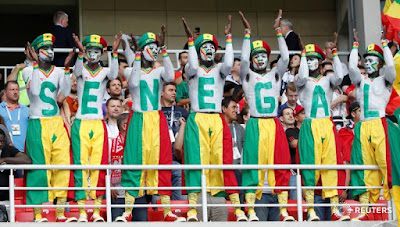