Okay, this week I failed as an editor because I can’t decide between two of Thomas Mukoya’s pictures so I am sharing both. In terms of beauty of image this takes the biscuit. A crush of warriors all pushing and shoving arcs from bottom right to near top left through a haze of dust being kicked up. I love the central figure, who seems to be trying to hold back the weight of the queue of beautifully dressed warriors. There is no escaping the expressions on each of their faces, especially, right on the edge of the frame, those gritted teeth.  Read on here 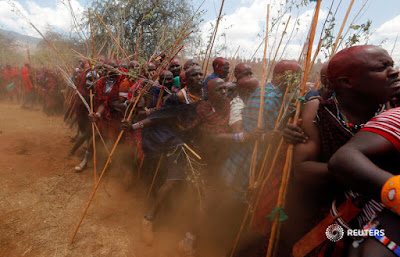 Maasai men of Matapato jostle to parade as they attend the Olng'esherr (meat-eating) passage ceremony to unite two age-sets; the older Ilpaamu and the younger Ilaitete into senior elder-hood as the final rite of passage, after the event was initially postponed due to the coronavirus disease (COVID-19) outbreak in Maparasha hills of Kajiado, Kenya September 23, 2020. REUTERS/Thomas Mukoya

And the second image by Thomas, why did I choose it? Well it’s about scale. You get a sense of the thousands of people who are taking part in this ceremony, which is just about the only thing you don’t get from the image above. As far as the eye can see, there are sticks and faces and then more sticks and faces. Your eye is not really drawn to a single face, which gives you a sense of the scale of this event 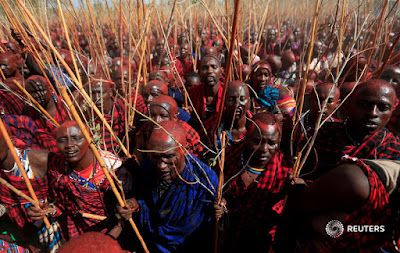 Maasai men of Matapato attend the Olng'esherr (meat-eating) passage ceremony to unite two age-sets; the older Ilpaamu and the younger Ilaitete into senior elder-hood as the final rite of passage, after the event was initially postponed due to the coronavirus disease (COVID-19) outbreak in Maparasha hills of Kajiado, Kenya September 23, 2020. REUTERS/Thomas Mukoya

Khaled Abdullah’s picture gives us a glimpse into grief at this funeral as you feel you have to peer through fingers poised near triggers that crush the viewer into the centre of the image. Three strong compositional diagonals, created by the finger, on the left, the line of the arm in grey that leads down to the heads, centre, and finally the stock of the weapon on the right, are a powerful counter to the fall of light. But even with all this, you just can’t look away from the boy’s eyes:  so sad. Or is that fury rather than sadness? 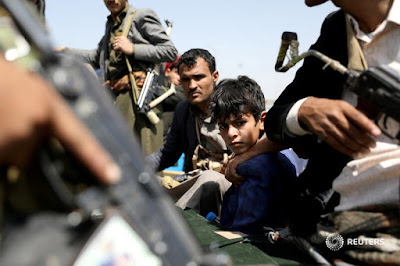 A boy rides with Houthi followers on the back of a patrol truck during the funeral of Houthi fighters killed during recent battles against government forces, in Sanaa, Yemen September 22, 2020. REUTERS/Khaled Abdullah

The moment you look at Saba Kareem’s picture you are aware that this man is blind. You know this because he is not looking at the task he is working and by the way his fingers, some doubled back, are powerfully and skillfully exploring the task at hand. The sense of determination is palpable. Not an easy subject to photograph well, but what drives us to his fingers is the criss- cross of lines of the vehicle with its bonnet lifted and the light on the fingers set against the dark engine. Read on here. 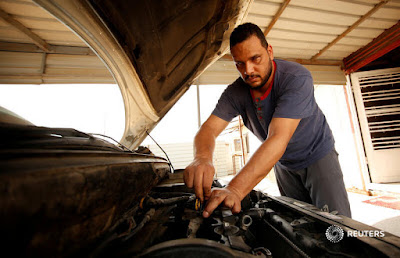 An uplifting picture from Amr Abdallah Dalsh with a complex composition that shouldn’t really work but it does. Basically, everything is on the edge of the frame. It’s all quite truncated with heads, arms, hands and necks all cropped off in a way that would ordinarily be quite uncomfortable to look at. Your eye is drawn to the blues of the background, but finally what we see at the centre of this swirling truncated chaos is a wonderful smile that lifts the heart. 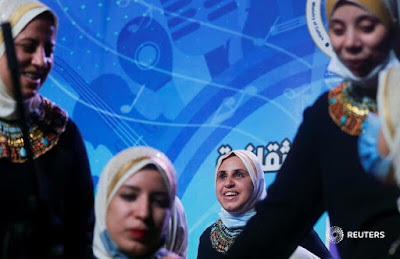 A member of Al-Nour Wal Amal (Light and Hope) chamber orchestra of blind women reacts after the first concert, following months in limbo due to the coronavirus disease (COVID-19) pandemic at the Manasterly Palace in Cairo, Egypt, September 20, 2020. REUTERS/Amr Abdallah Dalsh

Intensity and determination are the immediate impressions we get from Raneen Sawafta’s colourful picture. But without the caption we are unsure what is happening. We know it’s a school setting, but the teacher’s gesture seems unusually exaggerated. Is she angry? No, the child is very relaxed, and watching intently. Are they playing? No again. The eye contact is fixed and not playful. They are learning. Better just read the caption. 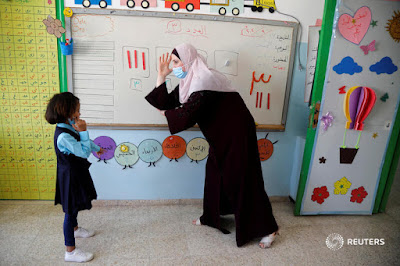 A Palestinian teacher uses sign language as she gives a mathematics lesson to deaf students at al-Hanan School for the Deaf, in Jenin in the Israeli-occupied West Bank September 17, 2020.. REUTERS/Raneen Sawafta

A complex and intriguing picture by Thaier al-Sudani to illustrate a complex story, a doctor beaten by family members of a coronavirus victim. The hand coming into the frame really makes this picture. Not only does it point out the tiny gesture by the man sitting in the wheelchair, it also points out the figure in bed almost invisible behind, screens, tubes, bottles, masks and bed clothes. Read on here. 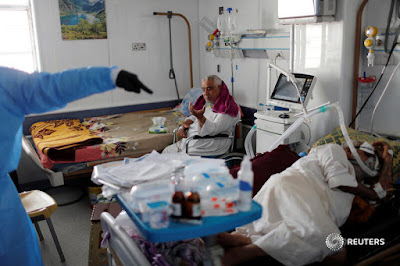 Take the politics out of this and what is not to like about a picture with a pyramid of cash stacked up in the public place. Close enough to reach out and grab a handful, except of course for the armed guards standing close by. When I first started in journalism my mentor said, “One question you need to always ask is ‘how much?’ and don’t forget that.” It would be great to know what the value of this pile is in dollars, as the cash is donations to fund conflict. 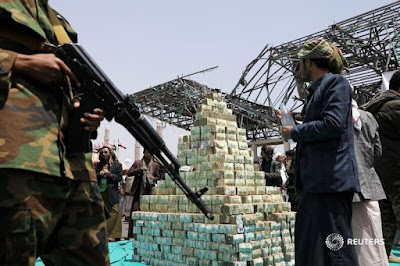 Houthi followers stand by bills of Yemeni currency during a ceremony held by Houthis to collect supplies for their fighters battling government forces in various frontlines, in Sanaa, Yemen September 24, 2020. REUTERS/Khaled Abdullah

Monicah Mwangi has captured all the expression, concentration and effort in the face of a young potential Olympian weightlifter. You can almost hear the grunt as Keysha lifts the weights above her head. Once we get over the visual distraction of the wording in the background, which I don’t really mind, we get to see the weights. It’s a start, but my word what a good start. Read on here for the rest of Monicah’s affectionate story. 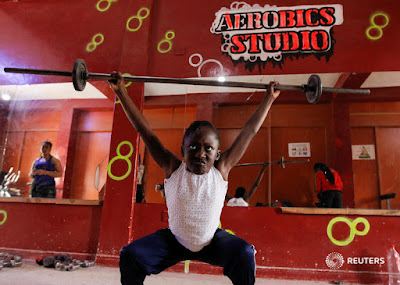