A stark image from Khaled Abdullah. You are captivated by the rather indignant look from this child as she is fed through her nose. The clean background and the shadows across her mother ensure that there are no visual distractions to take your attention away from those staring eyes, the bandages holding the feeding tube in place and the carefully manicured hands of her mother as she gently feeds her child. 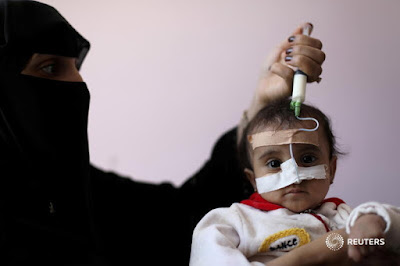 A woman uses a syringe to feed her malnourished daughter at a malnutrition treatment ward of al-Sabeen hospital in Sanaa, Yemen October 27, 2020. REUTERS/Khaled Abdullah

.Perfect timing by Thaier al-Sudani as we see the flaming Molotov cocktail framed in the concrete structure that the protesters are standing on against the clean flat background. The game now is to guess who has thrown it: The figure third from left, far right or maybe hidden? Either way, a terrific image and you can read on here for more. 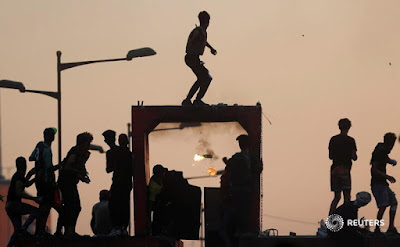 A brutal but very powerful picture from Ayfman Al-Sahili and one that raises an ethical question. When do bodies being exhumed from the grave become too grisly to publish? Bodies that have been mummified and entombed in ancient Egypt would probably, to most, not be offensive. The recently killed, buried and then dug up would probably be offensive to most and unpublishable. So where is the line? Is it when the dead are not recognisable? Or could it be how they are photographed? What has to be kept in mind is that these bodies are the remains of loved ones and their discovery can cause pain. At the same time it’s important to report this news and a picture is added proof of a mass grave, so self-censorship might be counter-productive. These pictures were moved to the wire with a warning ‘SENSITIVE MATERIAL- THIS IMAGE MAY OFFEND OR DISTURB’ so professional picture editors can make a choice according to their own ethical guidelines and audience. Read on here. 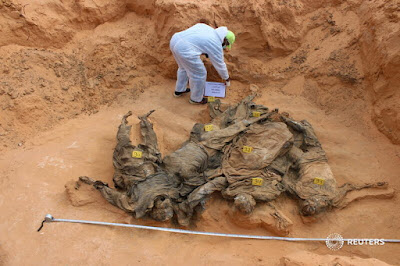 Bodies are pictured during the exhumation by members of the Government of National Accord's (GNA's) missing persons bureau, in what Libya's internationally recognized government officials say is a mass grave, in Tarhouna city, Libya October 27, 2020. REUTERS/Ayman Al-Sahili

Equally interesting on the subject of ethics are the pictures shot by Corinna Kern. Is it acceptable to publish images that show scar tissue from surgery? In some cultures, it’s the display of flesh that might cause offence while in others public display is considered a norm. Again, I think it is about how the images are shot and giving professional picture editors and audiences warning enough so they can chose whether to publish or look. The difference here too is that the subject, Eylon Nuphar, is able to make a choice when the portraits are being taken. How does she want to be represented? Eylon too has to balance how she is seen while at the same time drawing attention to her tough decisions concerning breast reconstruction after a double mastectomy, something she feels passionately about. What Corinna successfully managed was to shoot pictures so that public debate can take place regardless of where the lines of what is, and is not offensive, are drawn. Read on here. 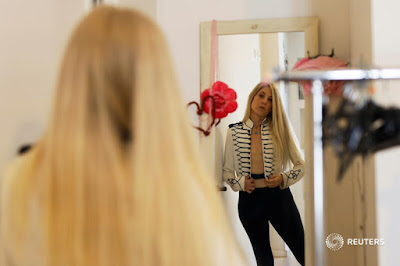 Eylon Nuphar, an Israeli performing artist who chose not to have her breasts reconstructed after a double mastectomy, looks at herself in the mirror as she prepares ahead of her interview with Reuters in Tel Aviv, Israel October 21, 2020. REUTERS/Corinna Kern

A warm and affectionate picture from Alaa Al-Marjani as boys get ready for a swim. I love the colours in this picture, the warm tones of the ceiling and the floor and the skin tones of the boys reaching out, side to side to the cool blue colours of the lockers. What I also like is the gentle humour, everyone is grinning except the boy being sprayed with the disinfectant, eyes firmly fixed. Maybe the disinfectant is cold and everyone will eventually get that grin wiped off their faces, that is until they hit the pool and the fun begins again. 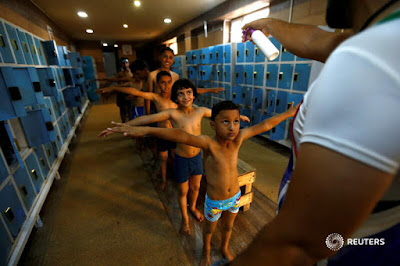 A man disinfects Iraqi children before using the swimming pool at Non-Government Organization-Mercy Among Them, amid the outbreak of the coronavirus disease (COVID-19), in the holy city of Kerbala, Iraq October 20, 2020. REUTERS/Alaa Al-Marjani

I have chosen two images from Baz Ratner as both tell different stories from the same setting but use a very similar visual motif: hands and arms. In the first frame you get such a strong sense of isolation and sickness as a lone hand reaches up into the centre of the picture. If you don’t take the time to see the figure dressed in full PPE in the rear of the image you might, wrongly, come away with the feeling the subject is all alone. 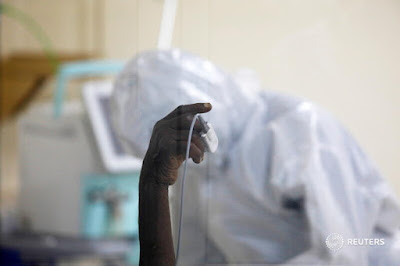 A coronavirus disease patient holds up his hand inside the COVID-19 ICU of Machakos Level 5 Hospital, in Machakos, Kenya October 28, 2020. REUTERS/Baz Ratner

But in this second frame shot by Baz the human contact, albeit through surgical gloves, and stating the obvious, gives us a sense of care, support and human warmth. The point here being that it’s so important to understand the messages your images may convey if you don’t think carefully about the edit. The visual subtext can be so subjective, so you need to not only think about producing a striking image, like the first image, you also need to be aware of what that image communicates to a wider audience. Baz has the luxury of being able to move several images that can tell different stories, and this gives professional picture editors a choice of image they may want to use to best illustrate the story. And of course, this story may change as the news shifts, which brings additional ethical responsibility for editors.  More pictures here. 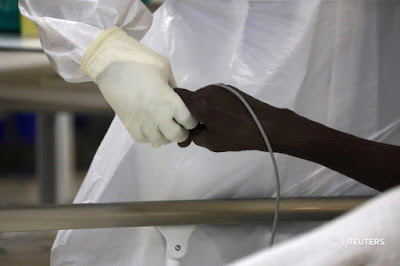 A member of the medical staff dressed in a protective suit holds the hand of a coronavirus disease patient inside the COVID-19 ICU of Machakos Level 5 Hospital, in Machakos, Kenya October 28, 2020.   REUTERS/Baz Ratner

Zoubeir Souissi’s image of grieving mother is relatively simply shot, long lens and cropped tight, her eyes closed in grief, her wrinkled hands holding her face. The torment in this woman’s face is obvious and more so when we read the caption to discover that it is his her son, Brahim al-Aouissaoui, who is suspected of carrying out the attack in Nice. So much sadness. Read on here. 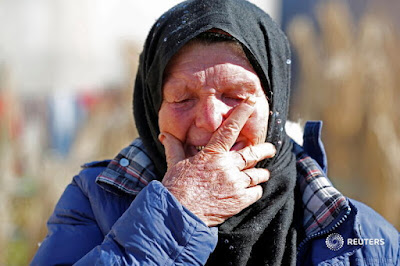 Gamra, the mother of Brahim Aouissaoui, who is suspected of carrying out Thursday's attack in Nice, France, reacts at her home in Thina, a suburb of Sfax, Tunisia, October 30, 2020. REUTERS/Zoubeir Souissi

Protests against French President Macron swept the region with thousands taking to the streets in various countries. It takes you a little while to notice in Feisal Omar’s picture that there is not a single matching pair of feet or shoes standing on the French tricolor.  More pictures here. 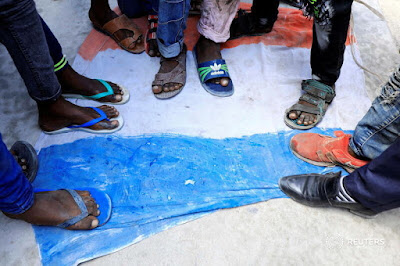 Somalis step on a French flag during a protest against the publications of a cartoon of Prophet Mohammad in France and French President Emmanuel Macron's comments, along the streets of Mogadishu, Somalia October 28, 2020. REUTERS/Feisal Omar

A tight and bold vertical crop of Mohamad Torokman’s picture brings us close to the action as the soldier fires a tear gas canister. Here the balance between retaining image quality and cropping for the greatest impact is a thin line to walk. We can almost hear the thump of the canister’s launch as the soldier bites his tongue with gritted determination, the canister spinning towards the top of the frame. 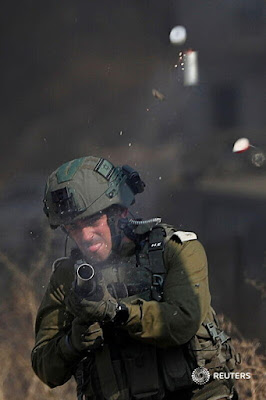 An Israeli army officer fires a tear gas canister towards Palestinian demonstrators during a protest against Jewish settlements, in Beit Dajan in the Israeli-occupied West Bank October 30, 2020. REUTERS/Mohamad Torokman

A lot of hard news and difficult ethical issues this week from the region, so something more gentle to end with. I love a good detail picture so how can I resist Amr Abdullah Dalsh’s close- up of a lion’s eye after cataracts have been surgically removed, especially when the bars of its cage are reflected in the now clear iris and pupil. 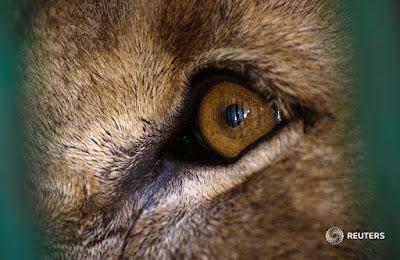