It’s okay to fail, isn’t it? Here is my contact sheet from two days shooting on the Lea Bridge Road last week. 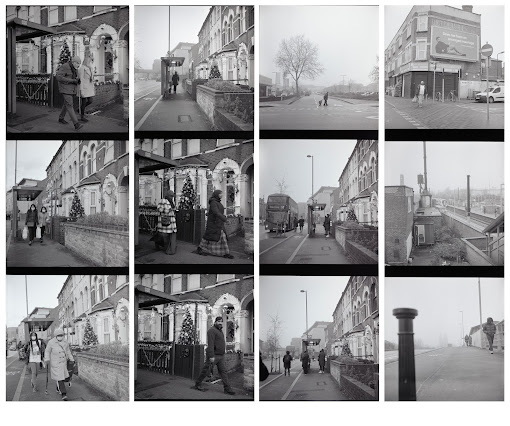 Now is the time of year when goals are set, personal New Year resolutions are made (probably already broken) and in the corporate world work place objectives are committed to paper.

I can almost hear managers telling employees on the annual goal setting meeting:

“It’s okay to fail. In fact, if you don’t fail you are not pushing the envelope. You need to be innovative, creative, agile, risk-taking and forward thinking. To survive we must all differentiate ourselves from our competitors by pushing for what might seem as the impossible”.

After the meeting and thinking back to the end of year review where failure was the focal point of the discussion you may begin to ask yourself ‘have I just been screwed again?’

Lucky me, I don’t have to go through this management-by-fear process but I do intend to use the new year to challenge myself - setting my own targets and no HR bell curve to meet. 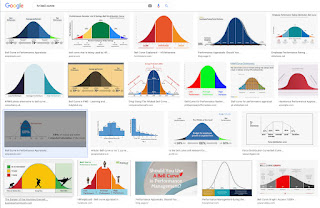 Photographers don’t need to be told when they have failed, they know it themselves. They just look at their pictures. Last week, hand on heart, I failed. I’ve shot a whole roll of film but have not captured a single decent picture. Here’s why.

Three things to keep in mind, and yes, I could be accused of getting my excuses in early; firstly, I didn’t see the images until after I processed the film, there’s no looking on the back of the camera on a Rolleiflex.

Secondly, and obvious as it may seem as I was shooting back and white film so colour and lights are reduced to tone. I am working hard to think tone, not colour and this is not easy.

And third, I have only 12 frames per roll of film.

I was interested in the Christmas decorations that still adorned the front of a house mid-January on the Lea Bridge Road. The bright cheerful lights set against the gloom of a winter’s afternoon and bus stop for the 55 that will take you to Oxford Street. I was drawn to the idea that this could help illustrate the multi-cultural nature of the Lea Bridge Road. 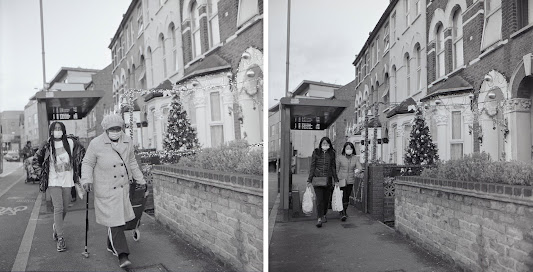 On the first frame the figures are too big and draw attention away from the decorations. With the second frame, the wall on the bottom right dominates the image so you don’t see the decoration or the people. I decided to move. 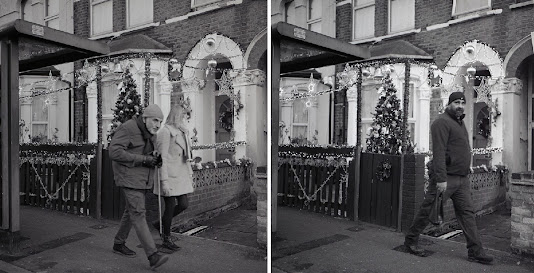 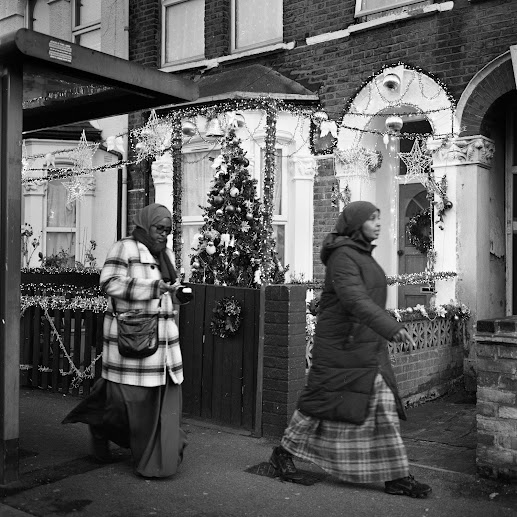 Women walk past a house that is still decorated for Christmas January 14, 2022 on the Lea Bridge Road, London.

The last frame I shot in this sequence, frame 5, has the figures well positioned either side of the tree and the echo of the triangle shape of the tree in the woman’s coat and dress shape is pleasing. But the light has dropped and the movement (and maybe some back focusing) in the figure on the right just distracts from the overall image.

The following day it was quite misty so I thought I’d revisit the same scene and try to explore my ongoing struggle of the relationship of scale between figures and buildings. My attention drawn to the bus stop, a bus, a view down misty Lea Bridge Road and people waiting at the stop near the Christmas decorations. Remember the film from the previous day was still unprocessed so I had not yet seen what I had already shot. 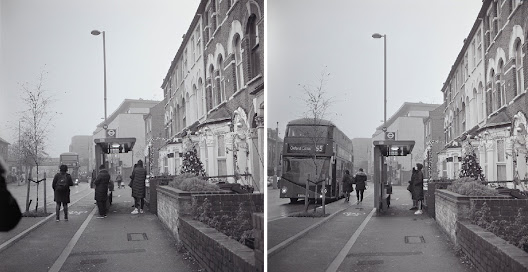 I was enjoying the strong diagonal lines of the wall and the windows on the right and the shape and line of the lamp post that cuts into the grey sky vertically dissecting the square image. What troubles me now is that there’s too much dead space on image 6 and even when the bus fills some of that space in frame 7 the position of the figures are less interesting. By removing the dead space top and bottom with a crop the lamp post is a visual distraction and the strong diagonals lost. I’ve ended up with a very dull image of a bus, a bus stop and some ill-positioned figures. 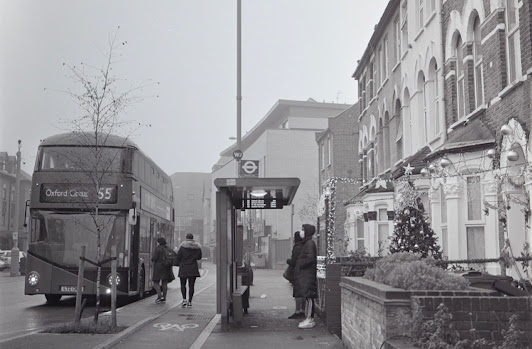 Before the sun cleared the mist, I wanted to further explore shapes against the grey misty sky.

In my opinion the most successful picture on this film is the one below but again not as good as I would like. I was looking at the shape of this tree against the sky on a road junction when I spotted a man about to cross. Sadly, passing traffic kept blocking my view. I would have liked to have captured him just before he reached the centre of the road. Also, the shapes would have been better if I’d crouched down lower creating more space between the lower branches of the trees and the roofline. By shooting sooner I would also be setting the dark tones of the figure against the lighter background of the houses in the distance. But I had to wait for the cars to clear and this was the best that was offered; not too bad but shame he begins to merge into the mid tones of the hedge and shame about the lamp post coming out the top of his head. 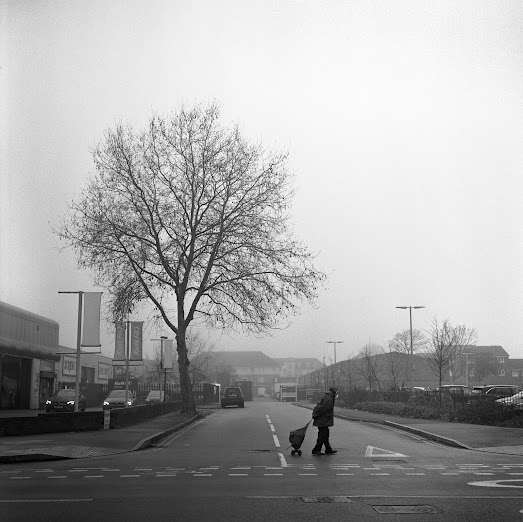 A man walks slowly across Heybridge Way on the junction of Lea Bridge Road, London in the morning mist January 15, 2022.

As a final note I have to admit that I spent quite a lot of time waiting for this picture of Lea Bridge rail station which, at the end of the day, doesn’t really work.  I had to position the camera so the lens poked though the fencing mesh. Composing the picture into vertical thirds using the chimneys my interest was the open door in the foreground. All I needed was a figure going into or coming out to give the image a focal point. I waited and waited more, finally a train came into the station and I decided to swap a figure in the doorway for a train on the station. I would have waited more but decided that a £130 parking fine from Waltham Forest was too bigger price to pay for a picture that may or may not happen. 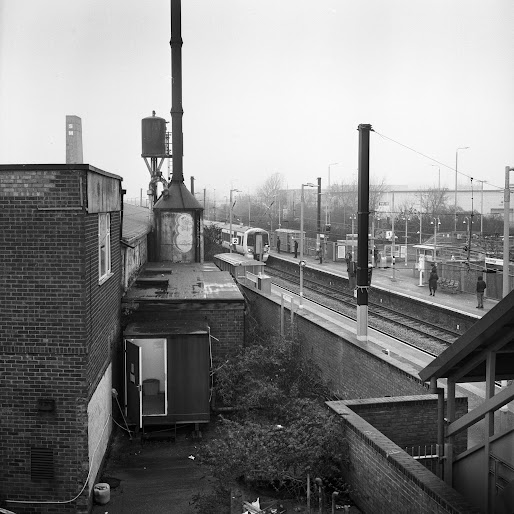 I like the shapes and the potential for figures either in the doorway or on the stairwell on the right of the picture so will return when I have more parking time. I am after all setting my own agenda and my own targets.

January 18th, I decided to try to catch someone walking in or out of the doorway early, in morning mist. By the time I managed to get through a 45-minute traffic jam the fog had lifted, and my hopes of catching someone at the start of their shift evaporated. What did present itself was strong low light and shadows. I had planned to shoot using the same composition but I had to move to one side as my own shadow was destroying the picture, I lost the vertical thirds. What I did gain is a rather pleasing zig zag of shapes and a striding figure shadowed on the brickwork.

What I love is continual change that forces you to abandon plans and initial ideas so you end  up with something you hadn’t thought of. Minutes after I took the picture below the sun had moved higher and the shadows had been lost. 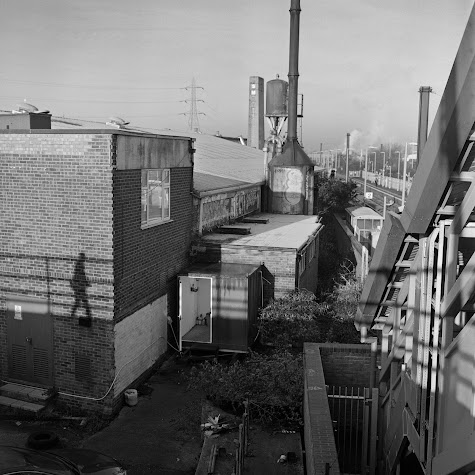