As a follow on from last night's post I am pleased to see that the Wall Street Journal enjoyed Kai's picture as much as I did. A big showing for the German who takes visual risks. 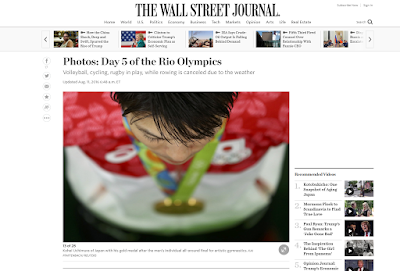 For the few that are concerned about my diet (and there are one or two) a slight improvement as a break between Archery Individual semi-finals and the start of the Women's Individual All-Round final gave me time to hunt out something green. 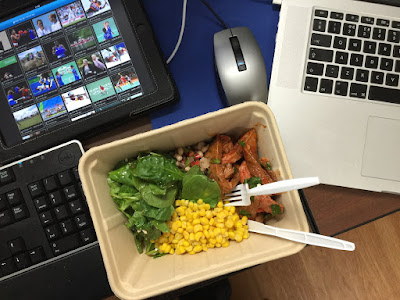 I thought I'd take the time to describe a little about my workflow. Each photographer has two or three Canon 1DX mk2 cameras which are either cabled or connected via wireless. The pictures are streamed from the camera directly to our servers. These cameras shoot 14 to 16 frames per second. As you can imagine I actively encourage the photographers to keep their fingers off the button. This below gives you an idea what a second's worth of pictures looks like. 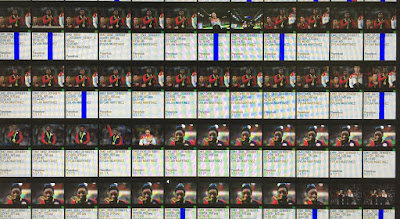 At the gymnastics we have five photographers. Each photographer has a 'window'  that is pointed to their folder in the server. One photographer, who operates the remote cameras that are overhead, can have up to five separate windows. The photographers send short bursts of pictures at the end of a routine. As the pictures come in I open each folder, scrolling through the pictures full screen, looking at every image. I mark the picture I intend to crop and file with a blue mark and when I reach the end of the photographers last burst of pix I mark it brown. This is what my screen looks like. The Archery event at the top, as which happens at the same time, just to make it even more complex. 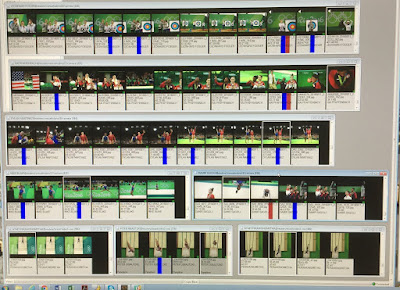 Once the image is open in full screen I decide on the crop (see below) and send it to the processors, Darrelle or Gary. They check it for quality, caption it and add the codes that send it to our global clients. We call this the wire. On average the pictures move from gym to clients in about 90 to 180 seconds. We are fast. Tonight I looked at 5000 pictures. 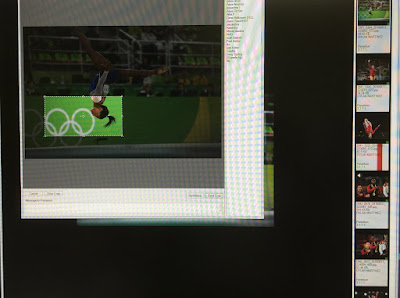 Here is the picture from the example above as it moved on the wire. I have cropped it to leave a clean background. As part of the Olympic Ring logo has been cut off in the original picture I decided to balance it by cropping in under the rings to remove the microphone at the bottom of the frame. I cropped in close to the right so Simone 'looks' down into space to the left of her face. 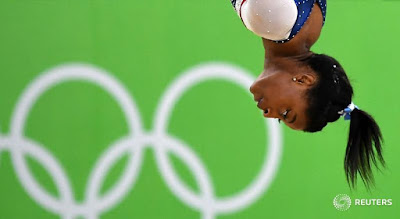 This is what I do, this is what I love, so sounds easy, doesn't it? Believe me, miss a picture a photographer loves or a key moment from the event and you are as popular as a ref who gives an away penalty in the dying seconds of a game the home team have to win.

To see more pictures from the day's action at the Rio 2016 Olympics click here
Posted by Cropperboyce at 02:17