Very much a change of pace today as the Trampoline took centre stage at the Rio Olympic Arena. The pictures take on a rather erie sense of calm as the athletes seem to fall gracefully from the skies only to be propelled up again twisting and turning. Switzerland based photographer Ruben joined Mike to help cover the competition in the gym. 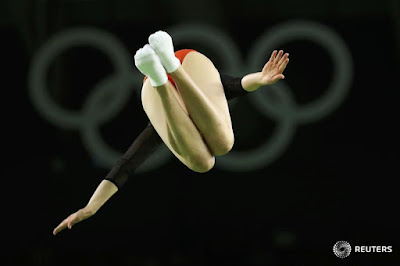 I am very drawn to this almost abstract image and it took me a while to work out why. I think I like its graceful confusion as the eye jumps around the picture with no time to pause while the athlete is timelessly suspended at the peak of their performance. The eye moves from the highlight of the feet against the black background and red of the leotard, then simultaneously out right and up and left and down to the hands that both seem to float in space, severed from the body.  The position of the hands then beckon you back into the image towards the Olympics Rings, soft in tone and focus, in contrast to the black, white and red.  The image then comes together to make sense just before the athletes twists and falls.

Ruben's picture is wonderful in its timing and design. Athlete Nicole perfectly horizontal as she falls past the Rio 2016 logo.  The judge to the far right has his head tilted slightly left to mirror the judge on the left forming a visual bracket bringing your eye into the centre of this letter box shaped picture.

Nicole Ahsinger of the USA competes in the Trampoline Gymnastics Women's Qualification Round of the Rio 2016 Olympic Games in Rio De Janeiro, Brazil.  REUTERS/Ruben Sprich

Later in the day I also edited Lucy's pictures who was shooting the heats of the 1500m, 400m and 100m at the Track and Field. No finals tonight, so relaxed and fun, the detail of the Olympic Rings earring catching my eye in the mass of flowing hair. 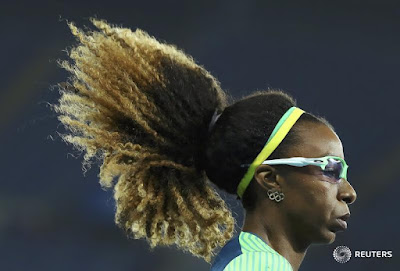 To see more pictures from the day's action at the Rio 2016 Olympics click here
Posted by Cropperboyce at 05:42