There is no ignoring the powerful pictures from Ghouta, Syria, by Bassam Khabeih. I have included two images; one of a man who at first appears to be helping to move rubble, before you realise that it’s actually him who is being helped because he is trapped waist-deep in debris. Bassam followed up on his story that you can see here. The second image is just so sad it hardly needs any explanation. Set against a backdrop of impersonal blue-and-brown metal, the light falls on the weeping woman, your eyes drawn to her mouth pressed against the blue cloth that covers her dead child. See the whole story here 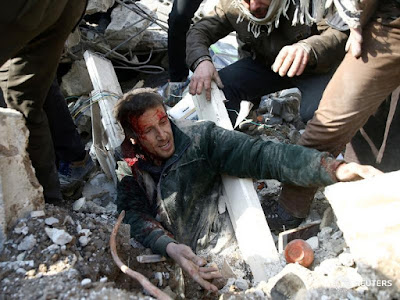 A man is trapped under debris at a site after an airstrike in the Saqba area, in the eastern Damascus suburb of Ghouta Syria, January 9, 2018.   REUTERS/Bassam Khabieh 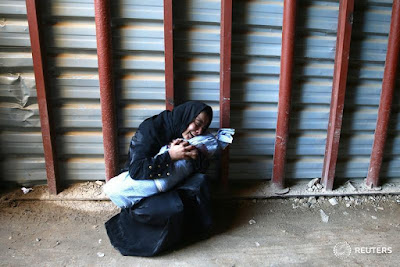 Heba Amouri, mourns as she holds the body of her two-year-old son, Emir al-Bash at a medical centre in the besieged town of Douma, eastern Ghouta in Damascus, Syria January 8, 2018.    REUTERS/Bassam Khabieh

Tiksa Negeri’s picture is wonderfully composed and lit. The pilgrims, who appear to be buried in their own thoughts of prayer, move around the central figure drawing you deeper into the image to finally settle on the lines on the face. There is no mistaking the strong feeling of piety on the face of the pilgrim caught in the candle light. I get a real sense of peace and calm looking at this, so thank you Tiksa for a moment’s peace. 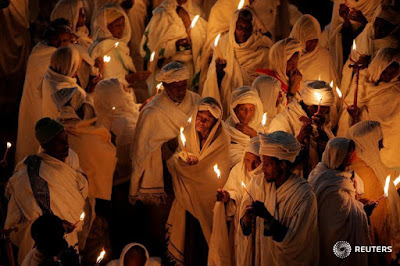 Amir Cohen’s picture of children having fun reminded me of the picture by photojournalist Eugene Smith of his children running through the woods. I love the compositional balance and shapes, and think you can almost hear the echoes of the children’s feet from the tunnel. You can see Eugene Smith’s picture here if you want to compare. 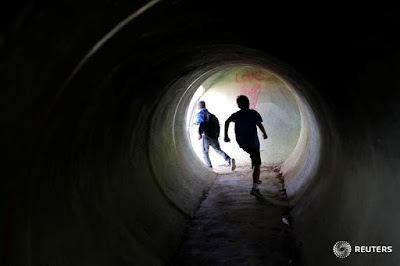 Children run inside a public bomb shelter in the southern city of Sderot, close to the Israeli border with the Gaza strip, January 8, 2018.   REUTERS/Amir Cohen

Some pictures attract my attention because they are a little bizarre and raise more questions than they answer. Ammar Awad’s gentle image of a boy standing on a horse, shot as part of a Wider Image story on the relationship between people and their horses,  is one such picture. Why would you stand on the saddle? There seems to be no other answer except that it might be a fun thing to do just because you can. You can see the rest of Ammar’s Wider Image story here 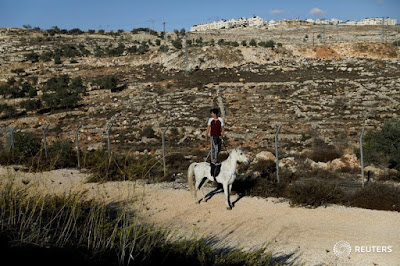 The expectation at military parades and ceremonies is that all things will be in order. Thaier Al-Sudani has shot a very busy and messy picture that breaks with this preconceived idea as the men relax, hug and kiss each other in shows of affection and respect at the end of the ceremony. The tangle of blue uniforms, arms, white gloves and red stripes highlighted against a clean blue background, gives me a feeling of a semi abstract painting. You have to visually pick your way through the swirling chaos to find a semblance of order, a face, a hand and a rifle. 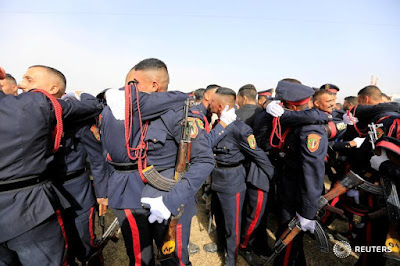 A first glance Reem Baeshen’s picture may appear rather stiff and formal, but to me it has an air of something slightly out of the ordinary or even a sense of pensive expectation. Of course I could be reading too much into this because I know that this is the first motor show solely dedicated for women in Saudi Arabia, after King Salman ordered an end to the ban on women drivers. Knowing this makes it a rather exciting image to illustrate a ground-breaking change in policy. Read on here 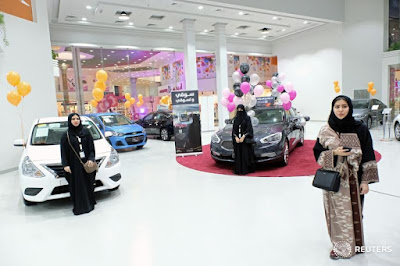 This is a simple picture of a brutal looking truck, dented, dirty, its headlamps and windscreen missing. So why pick it?  Afolabi Sotunde has captured the grim faces of dozens of people crowded on top as it goes in a convoy along a dusty road. Its load? Some of the bodies of 73 people killed by Fulani herdsmen in clashes over land. Read on here 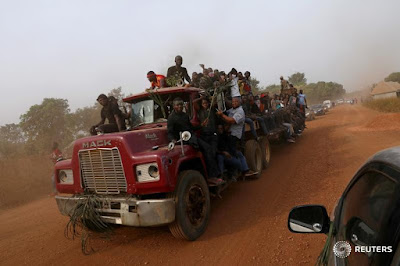 People are seen on a truck carrying the coffins of people killed by Fulani herdsmen, in Makurdi, Nigeria January 11, 2018.   REUTERS/Afolabi Sotunde