A chaotic mess of a picture by Kenny Katombe that keeps on rewarding you the more you look, not unlike a Pieter Bruegel painting from the 16th century.  The policeman walking behind the calm but submissive priest looks like he’s holding his breath. People in the middle distance fall to the ground to take cover, except for the single protester who appears to be glaring defiantly at where the tear gas came from. People behind the tear gas cloud run in panic, while the police to the left of the picture seem unconcerned as they watch the scene unfold. 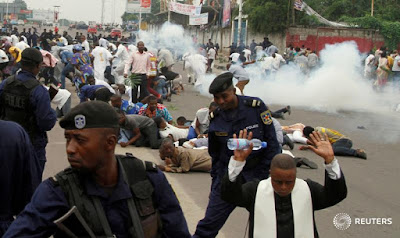 Uniformed men, aggressively chanting and shouting, always slightly disturb me, especially when they are all holding weapons. Rodi Said’s picture gives me an even stronger feeling of unease. In its composition, the picture is very busy and at the same time strangely ordered, with a regular pattern of hands, faces and rifles slowly drawing you to the face of the man shouting, the line of his mouth echoed by his cap. Maybe I feel uneasy because his face is so young and I wonder if he really understands what he could be facing in the coming days on the Syrian-Turkish border once all the chanting is done with. 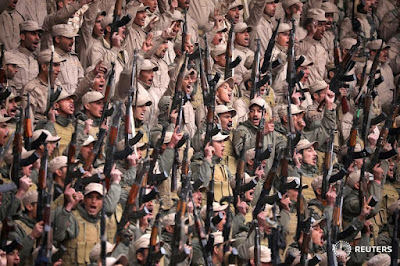 Fighters from the self-defence forces of the Kurdish-led north hold their weapons during a rally in Hasaka, northeastern Syria January 23, 2018.   REUTERS/Rodi Said

Cold, damp, miserable and muddy, the mood is set in Khalil Ashawi’s rather ugly-shaped picture as FSA soldiers on the Turkish-Syrian border slowly emerge from a foggy landscape. All colour is drained from this picture, the composition and the focus are on the soldiers in the background, and this accentuates the sense of confusion and uncertainty. 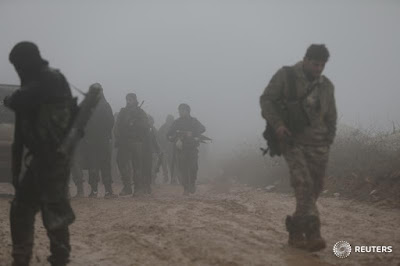 Mohammed Salem’s portrait of a Palestinian protester is one of a series that you can see here on the Wider Image. The reason I have selected this image is rather complex. Even though he is masked, using a sling and standing in a smoke-filled landscape at the scene of clashes, there is no anger coming from the picture. It has a very different mood from the angry images we see from the weekly clashes, and that is probably because it is posed. In this portrait, as in all good portraits, we have time to study and learn about the subject. But its real strength comes when we look at it in the context of the other portraits in the series and read people’s individual reasons for protesting.  The whole is greater than the sum of its parts. I feel that I get a better understanding of their motivation and a very strong sense of the frustration and anger. 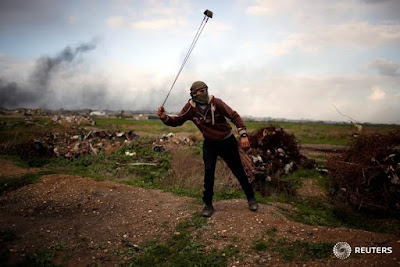 A Palestinian protester holds a sling as he poses for a photograph at the scene of clashes with Israeli troops near the border with Israel, west of Gaza City, January 19, 2018. “What I can do to stop Trump’s decision on Jerusalem is to use this sling to hurl stones at Israeli soldiers with heavy weapons,” he said. “My dream is to see all Arabs and Muslims united in one battle t restore out holy land.” REUTERS/Mohammed Salem


Ammar Awad’s picture selects itself this week. Who can resist the simple silhouetted shape of a man wearing a hat, carrying a stick and a bag, set in the monochromatic frame of an old city street, especially when the only colour in the picture is a line of yellow lights that guide you straight to the figure. 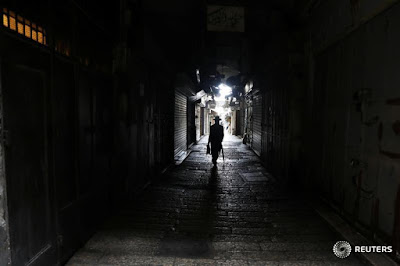 A man walks past closed shops as Palestinian political parties call for a general strike protesting the visit of U.S. Vice President Mike Pence in Jerusalem and the U.S recognition as Israel’s capital, in Jerusalem’s old city January 23, 2018.   REUTERS/Ammar Awad

What I like about Amr Abdullah Dalsh’s picture after a news conference is that there are so many expressions of emotion on the various faces. We see sadness, disappointment, anger, frustration, a wry smile and a look of support. Even the posters on the walls get in on the act, along with the consoling hands holding Khaled Ali’s arm. 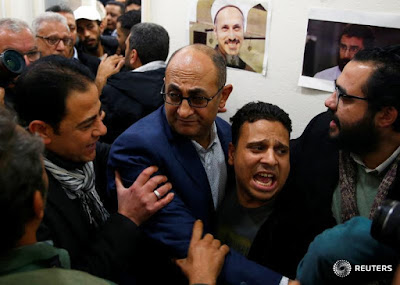 Supporters of Egypt’s Presidential candidate Khaled Ali react after a news conference where he announced that he is withdrawing from the presidential race in Cairo, Egypt.   REUTERS/Amr Abdullah Dalsh

The school run is very different in many places but its still a school run. I really like Alaa al-Faqir’s affectionate picture as to me it offers a glimmer of hope. Even through the children are walking past war damage rubble they still getting pleasure from jumping into and over puddles on the way to school. I think a universal pleasure when you are young. I really like the zigzag shapes that draws you into the picture from the child hiding behind their bag to the gaggle of people in the background. 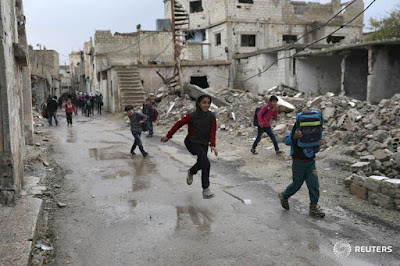 Students run past rubble of damaged buildings in a rebel-held area in the city of Deraa, Syria January 25, 2018.   REUTERS/Alaa al-Faqir

And just for my love of the use of complimentary colours in pictures, captured moments in strong shapes I could not resist adding Satish Kumar’s picture of marathon runners in Dubai pre-dawn. What attracts me most is the strong triangular composition, the light directly behind the leader’s head and the kick of the heels in unison. I think an image that rewarded Satish for their early start. 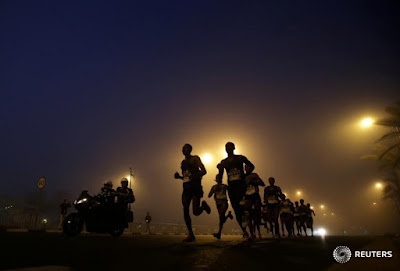