It was not easy to pick a single image from the clashes on the Israel-Gaza border but Ibraheem Abu Mustafa’s image is breathtakingly powerful. Figures running from the black smoke, flames, live fire and incoming tear gas canisters combine all the elements of the day. The only real colour in a black and dark picture is that of the Palestinian flag. You can see Ibraheem’s personal account of how he took his picture here 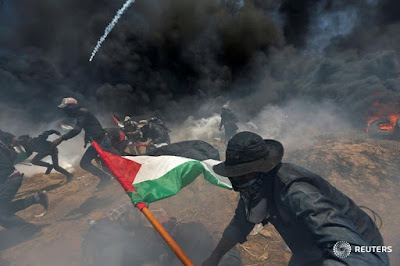 Palestinian demonstrators run for cover from Israeli fire and tear gas during a protest against U.S embassy move to Jerusalem and ahead of the 70th anniversary of Nakba, at the Israel-Gaza border in the southern Gaza strip May 14, 2018.   REUTERS/Ibraheem Abu Mustafa

Surrounded in black shadows, the face of a dead child is gently touched by a relative at her funeral. The light seems to be borrowed from a high renaissance painting. Mohammed Salem’s image is as powerful as it is sad. To me the silence around the scene is deafening. A complete contrast from the smoke, fire, noise, anger and bloodshed that filled images from the previous day. I am saddened by this but the debate surrounding this death will rage on. 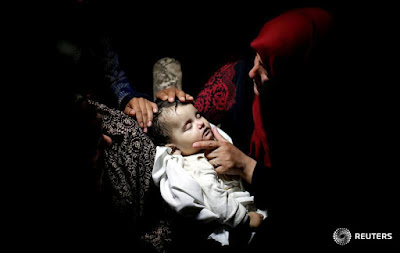 A relative mourns as she carries the body of eight-month-old Palestinian infant Laila al-Ghandour, who his family claim died after inhaling tear gas during a protest against U.S embassy move to Jerusalem at the Israel-Gaza border during her funeral in Gaza May 15, 2018.   REUTERS/Mohammed Salem

Thaier Al-Sudani’s colourful picture of a woman displaying her ink-stained finger after voting is a wonderful mix of bold colour, shape and line. What is most attractive about this image is that even though it has all the colours of the rainbow, your eye is drawn straight to the woman’s face and hand, framed in the solid blacks. Once you have looked at her face and inky finger, your eye can move on to enjoy the colours. 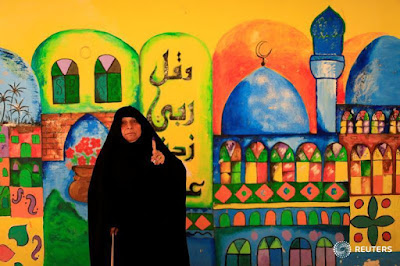 An Iraqi woman shows her ink stained finger after casting her vote at a polling station during the parliamentary election in the Sadr city district of Baghdad, Iraq May 12, 2018.   REUTERS/Thaier Al-Sudani

I can’t help smiling at the reaction of the fans in this picture by Zoubeir Souissi as the riot police officer charges at them. The man on left seems to be saying, “not me, honest,”  the man in the middle is running away -  “I’m out of here” - while the man on the right is just sitting there – “innocent me”. Let’s hope none of them got whacked by the policeman’s baton. 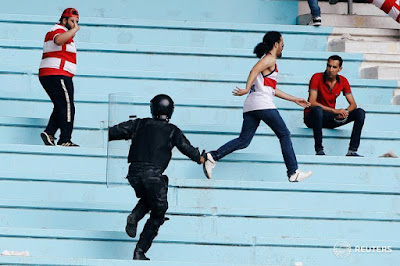 What is most appealing in Ammar Awad’s picture is the optical illusion that the man being photographed appears to be floating in the air. This illusion is created by the shadow cast on the ground in the lower part of the image. At first glance, you might think it is being cast by the man being photographed, but it is not. If you look carefully you can see that his shadow is cast behind him and the shadow in the foreground is that of the boy taking pictures. 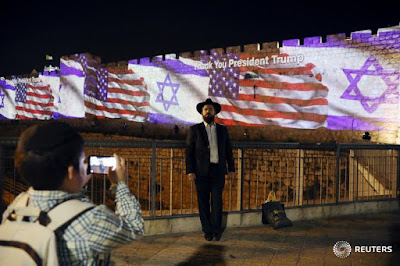 People take pictures of the U.S and Israeli national flags that are projected on part of the wall surrounding Jerusalem’s Old City May 14, 2018.   REUTERS/Ammar Awad


It’s hard to ignore this bold and colourful picture by Zoubeir Souissi as it jumps out at you from the page. This is a classic case of an image that can read as easily in tiny form published on a mobile device as it can if it were printed the size of a billboard.  The big red triangle directs the eye to the lone demonstrating figure. 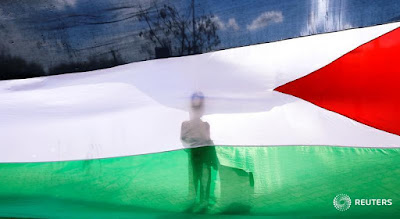 The shadow of a protester holding a Palestinian flag is seen during protests against the U.S. embassy move to Jerusalem, in Tunis, Tunisia, May 15, 2018.   REUTERS/Zoubeir Souissi

Portraits are some of the hardest pictures to shoot well, especially when you only have a short time to capture your subject in the street. Akintunde Akinleye’s affectionate portrait of a rat poison seller is a well-composed image of understated and muted tones and colours. A wry smile creeps across my face when I see ‘doctor’ written on his hat and the words rat, rat, and kill come into focus from the eye line of the man who’s just creeping into the edge of the frame. A lucky break too for Akintunde as the man on the edge has a most wonderful outfit of striped blue and white. Any more into the frame, he’d be a distraction from the ‘doctor’ and any less he would not be there. 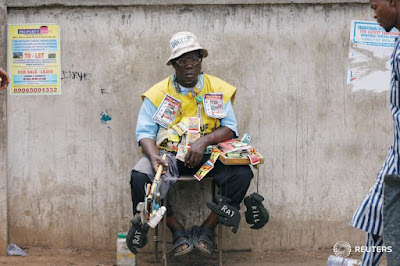 A man selling rat poison sits on a stool as he waits for customers at Oiodu district in Nigeria’s commercial capital Lagos, May 3, 2018.  REUTERS/Akintunde Akinleye


Although a Week in Pictures is not so much about the top news stories but more about the pictures that have caught my eye, this week it is dominated by the clashes on the Gaza-Israeli border. This story has thrown up so many great images it’s hard not to include them. You almost choke on the fumes in Ibraheem Abu Mustafa’s picture, as tiny figures dwarfed and engulfed by the raging flames and black smoke, run in different directions in the chaos. 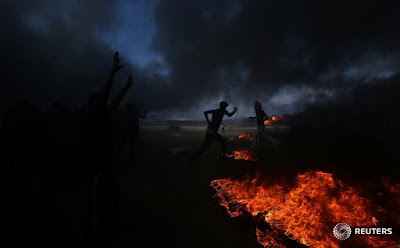 Palestinian demonstrators run during a protest marking the 70th anniversary of Nekba, at the Israel-Gaza border in the southern Gaza strip, May 15, 2018.    REUTERS/Ibraheem Abu Mustafa


The curved compositional shape created by the coffins and the people standing on the edge of the mass grave make me think of a giant mouth that is going to consume the bodies of those killed in the flood. The different-sized coffins in the dark hole add to this impression, as they look like broken teeth in blackened gums. The sadness is quite overwhelming when you notice that the many are the coffins are small, holding the bodies of drowned children who will soon be swallowed by the earth. 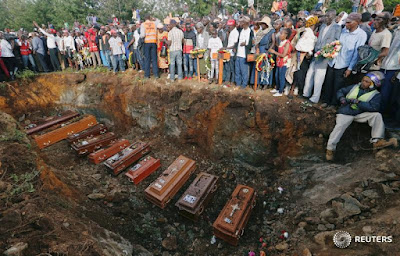 Coffins are seen arranged inside a mass grave during the burial of people killed when a dam burst it walls, the water flooding onto nearby homes, in Solai town near Nakuru, Kenya May 16, 2018.   REUTERS/Thomas Mukoya

To illustrate the start of Ramadan in the region, Amr Abdullah Dalsh shot this calm picture of reflection and prayer. This mood is created by wide space around the lone figure, his white robes highlighted against the black symmetrical background of the arched doorways and graceful sweep of the drapes. The high contrast of black against white is held in by the pastel colours of the brickwork and marble flooring 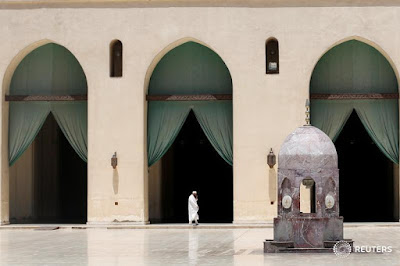 A member of the Bohra community prays inside the Al-Hakim bi-Amr Allah Mosque on the first day of the Muslim holy fasting month of Ramadan in Cairo, Egypt, May 17, 2018.    REUTERS/Amr Abdullah Dalsh