Finding a new picture at an event that is visually strong but also repetitive is never easy. In Ibraheem Abu Mustafa’s powerful image, the notion of combating tear gas with sports rackets raises the bar even higher. What is also a little strange is that although this is a striking image taken in a very dangerous situation I feel uncomfortable, since it may verge on gallows humour. Do you get this sense too? See more images from the clashes here. 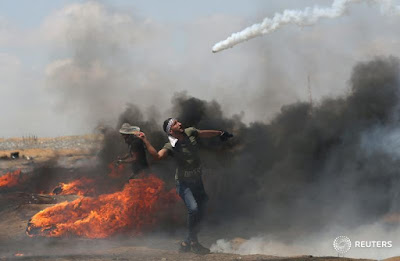 A Demonstrator uses a racket to return a tear gas canister fired by Israel troops during a protest where Palestinians demand the right to return to their homeland, at the Israel-Gaza border in the southern Gaza strip, May 11, 2018.   REUTERS/Ibraheem Abu Mustafa

What seemed impossible six months ago now appears to be happening - an election in July in Zimbabwe. Maybe I am reading too much into this wonderfully graphically composed image by Philimon Bulawayo, but it looks like a picture of hope. I am attracted to the shape created by the profile of the silhouetted delegate perfectly placed between the smiling face of President Emmerson Mnangagwa and the text. It looks like advice is being whispered into the president’s ear. 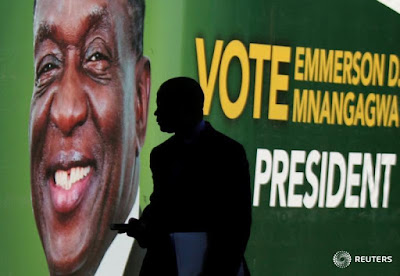 A delegate arrives for a meeting between Zimbabwean President Emmerson Mnangagwa and liberation war veterans in Harare, Zimbabwe, may 11, 2018.  REUTERS/Philimon Bulawayo


There is only one way to describe Ari Jala’s picture from Mosul: chilling. The eye is immediately drawn into the simple zigzag triangular design of the image, punctuated by the repeated image of an execution painted on the wall, again, and again, and again. It’s only then that you notice the neatly turned-out schoolgirl heading to her lessons. Read the story here. 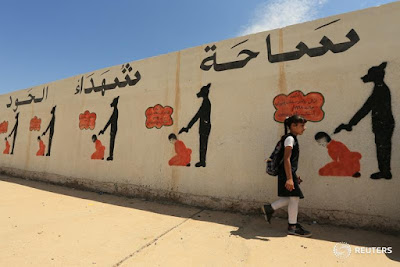 When a detail picture is well shot it can often explain so much in a story. This is true of Thomas Mukoya’s picture of footprints in deep mud. The rippled surface of the ground is broken by footsteps that lead you from the rear of the image out into the foreground. For me, this raises a question. Is this people fleeing a natural disaster or people coming to the rescue? I have to read on to find out, and you can do so here. 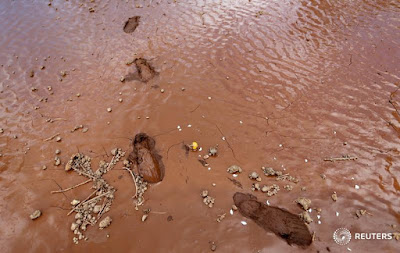 Footprints are seen on wet ground as volunteers arrive for a recovery mission after a dam burst, unleashing water through nearby homes in Solio town, near Nakuru, Kenya May 10, 2018.    REUTERS/Thomas Mukoya

Often in the Middle East and Africa region there is little to celebrate in terms of good news and I resist the temptation to try to find ‘good news’ images to soften the harsh realities of the week’s file. But, I am actually an optimist and when a good news picture is filed it jumps out at me. Two such images are from Mohamad Torokman, who is more often in the thick of violent clashes. How could I resist the sheer joy in the picture of a groom being held aloft, upturned faces laughing and smiling, and the line of lights seeming to echo the bounce of the groom on the sea of hands? And likewise, how could I resist the smiling sales assistant holding up a wedding dress as if she is part of the choreography for a Swan Lake ballet? I could not, so here they are. 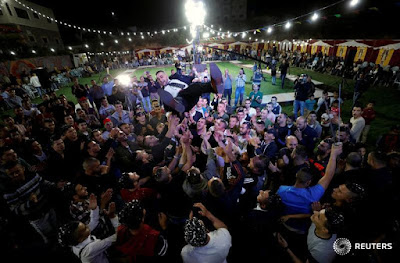 Palestinian groom Hejres Torokman is thrown in the air during his wedding party in Jenin in the occupied West Bank May 7, 2018.   REUTERS/Mohamad Torokman 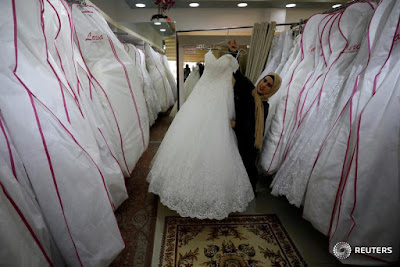 A Palestinian saleswoman displays a wedding dress in a store in Ramallah, in the occupied West Bank May 9, 2018.   REUTERS/Mohamad Torokman

An election in Lebanon is not easy to cover. Security is a concern and trying to get away from the standard fare of press conferences, politicians arriving or leaving buildings, (often in cars) or being mobbed by supporters in secure areas, is almost impossible. Almost impossible too is to find a generic image that can be used to explain the complexities of the story. Jamal Saidi has done well to find this simple semicircle shape of election posters supporting Hariri plastered on a Ferris wheel. 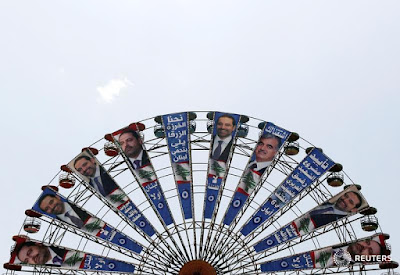 For me, Raneen Sawafta’s picture of a boy drinking water from a pot is a beautiful,  simple image of daily life. I love the single direction of light on his face and the pot that leaves strong shadows across his body and in the background of the image. The flash of light on the water draws your eye right to the centre of the image. I get a sense of timeless joy seeing this boy drinking from his father’s traditionally made pot, maybe a skill that has been handed down from generation to generation. 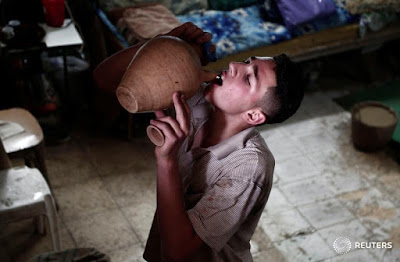 The son of Palestinian clay pot maker Jamal Fakhori drinks water at his father’s workshop in Jaba town near Jenin, in the occupied West bank may 1, 2018.   REUTERS/Raneen Sawafta