I just needed to add Mohamed Abd El Ghany’s star spangled picture of the 'Blood Moon'. What I like so much about this is that Mohamed has approached this differently know that there would be many images of the moon in its red state through out the region. By using a long exposure and tripod he has put the lunar eclipse in the context of the cosmos and man. I feel this drives home just how small we look with our little electric light and digital technology. See more lunar eclipse pictures here 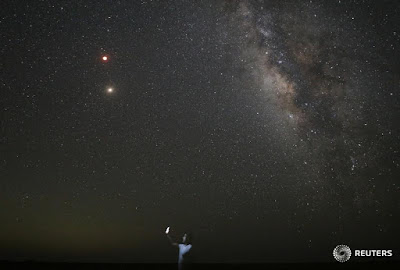 Baz Ratner’s picture of people watching as slum homes are destroyed to make way for a road has a slightly uncomfortable yet familiar feel to it. How often have you peered through fencing to watch construction work, or those of you who have toddlers would have more than likely entertained them with a trip to look at the ‘diggers’ and ‘workmen’. Although a very busy and complex image we are drawn into it from the strong dark tones in the foreground, through to the centrally placed figures wearing red in the middle ground up to the hazy distance of a mechanical digger tearing at the makeshift buildings in the dust. What is slightly uncomfortable is that this is the destruction of the homes of some of the poorest in the city. Read on here. 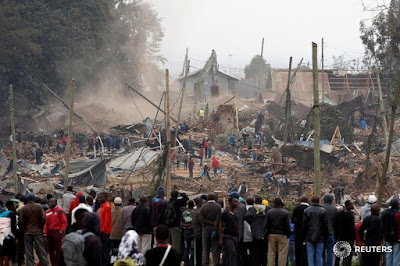 Onlookers watch as bulldozers demolish houses to make way for a new road in the Kibera slum in Nairobi, July 23, 2018.   REUTERS/Baz Ratner

The only way to describe Luc Gnago’s picture from the bus station in Mali is an explosion of light and colour. I am excited and exhausted as my eye races around this busy scene. Any colour you like is there. I so want to be there in the hustle and bustle, and I am not even worried by his shadow cast on the back of the green minibus or is that the shadow of the woman with the sack on her head? 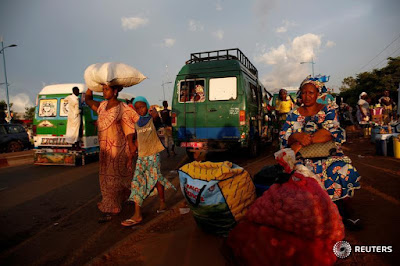 People hurry as they move to and from mini buses at the bus station in the evening light in Bamako, Mali, July 24, 2018.    REUTERS/Luc Gnago


I can’t help but think of the sun-dried bones of a prehistoric dinosaur when looking at the building in Tiksa Negri’s picture from Eritrea. I like the beauty and magnificence of the building destroyed by conflict and baked for years by the sun. It’s the same heat that the person carrying a table is sheltering from. 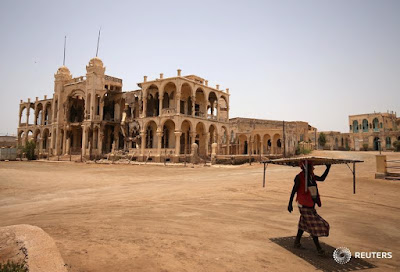 A man carries a table as he walks past the ruins of a building in the port city of Massawa, Eritrea July 22. 2018.   REUTERS/Tiksa Negri

What is exciting is that we are now getting pictures out of Eritrea after years of no access. I love the pool of light which draws the viewer straight to the figures crossing the road silhouetted by the single car heading towards us. I sense that Tiksa Negri’s night street scene picture is really quite illustrative of the issues confronting the country and the capital, Asmara. The fact that the streets are hardly lit demonstrates the extent of the poverty the country is facing. 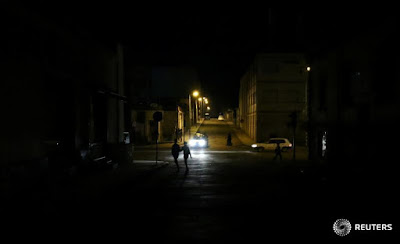 An Eritrean couple walk along a street at night in Asmara, Eritrea July 21, 2018.   REUTERS/Tiksa Negri

In very much the same vein as the picture above, a small detail in a wide, even-toned space will catch your eye and you will look closely into it. With Ammar Awad’s powerful picture of a warplane in an attack dive you need to study it even more closely. Only then will you spot the two bombs released from the aircraft - destruction and possible death only seconds away. 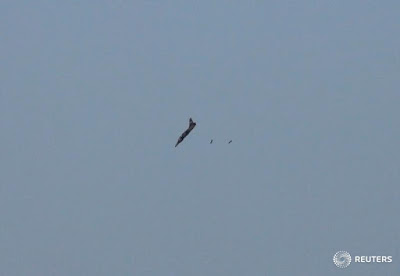 A warplane carries out a bombing run above Syria near the Israeli-Syrian border as seen from the Israeli-occupied Golan heights Israel, July 24, 2018. REUTERS/Ammar Awad

The strong light and the shallow depth of field in Suhaib Salem’s picture create an almost abstract swirl of body shapes, faces and hands that finally draws you to the face of the grieving woman. Once your eye settles on her, you look deeper into the grief. Her arms are tightly wrapped around the man, squeezing hard. It’s then you notice the hand from the almost invisible woman standing passively on the left, fingers digging into her brow, we assume, trying to rub her grief away. 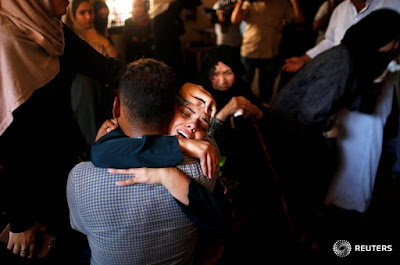 Relatives of Palestinian militant Abu Dakah, 31, who was killed in an Israeli strike, mourn during his funeral in Khan Younis in the Southern Gaza strip July 21, 2018.   REUTERS/Suhaib Salem

One normally associates the rainbow colours with LGBT and gay rights demonstrations, but not so in Corinna Kern’s haunting picture. Most colour has been taken out of the image as Corinna shoots through a transparent banner that has Netanyahu’s face printed on it. The image has the look of video frozen in transition as you fade from one sequence to the next. 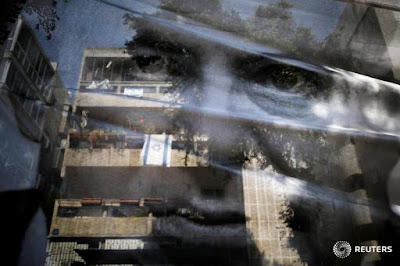 Israeli national flags can be seen through a banner with a picture of Israeli Prime Minister Benjamin Netanyahu, during a LGBT community members protest against the discriminatory surrogate bill in Tel Aviv, Israel July 22, 2018.   REUTERS/Corinna Kern

Strong colours, strong lines of design and a flow and counter flow all balance in Siphiwe Sibeko’s picture to make you feel like you are on a powerful tide of people moving from left to right and back again. Everyone is looking from right to left in this picture, their arms all leading in the same direction, a seething mass of people. But the main figure looks in the opposite direction, her face held motionless in the strong light. She seems to be beckoning to the army of people from Zimbabwe: Onwards, onwards! 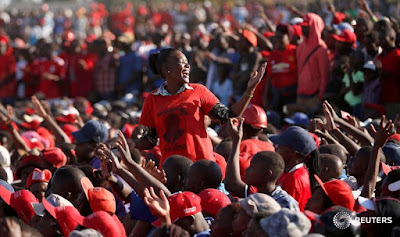 The inclusion of a second picture from the same story by the same photographer is rare in my weekly round-up, but I cannot resist the grace and beauty of the hands, fingers, eyes and colours in Luc Gnago’s wonderful picture of supporters at a political rally. You are immediately smitten with the beauty of the woman in profile with the red head scarf. You then feel as if you are in a complex and delicate dance that involves half glances of eyes through veils that finger and hand movements momentarily reveal. Count the number of eyes you can see but where you can’t see the full face; include in that count the posters too and you will maybe understand how I got this impression. Read on here. 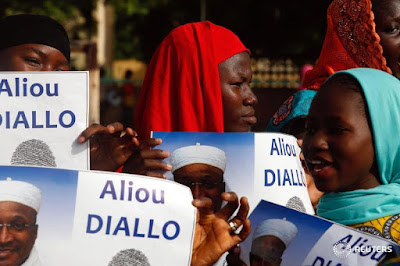 Amr Abdullah Dalsh uses the simple technique of back focusing that draws you immediately to the point of the picture, a portrait of a son. The ugly top stark lighting in the room not only highlights the picture in the black frame against a white wall but also darkens the eyes of the parents as they recount their story of their arrested son. The mood is very somber. Shawkan, their son, faces the death penalty. Read on here. 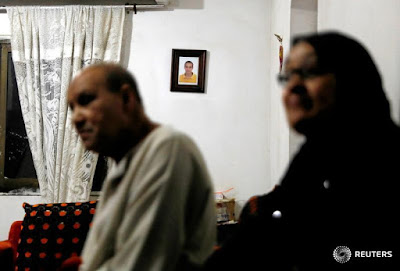 A photograph of jailed Egyptian photojournalist Mahmoud Abu Zeid, also known as ‘Shawkan’ is seen behind his parents at their home in Cairo, Egypt July 19, 2018.   REUTERS/Amr Abdallah Dalsh