Strong compositional lines cut across Azad Lashkari’s picture like a frenzied attack on the visual senses. The horizon line slightly lower than the centre of the picture cuts through the heads of those holding the poles, forcing you to look up at the soldiers precariously balanced, before your eye speeds back to the flag in the distance. The diagonal lines of the safety mats bring your eye back around to the foreground of the image. A wonderful feat of balance and composition. 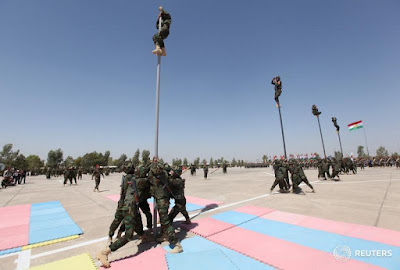 Members of the Peshmerga Zirvani commandos demonstrate their skills during their graduation ceremony at the Tiger training camp in Erbil, Iraq August 16, 2018. REUTERS/Azad Lashkari

Luc Gnago’s picture is a wonderful example of what I call a picture that ‘does what it says on the tin’. It’s the vote count of the presidential run-off, we see the candidates’ names on the blackboard, the number of votes marked in white chalk marks and an official holding up a voting form with the candidates’ pictures on them. If I were to nit-pick I would like the man in the background to not be there but I have learned we don’t live in a perfect world so I go away very happy with this picture. 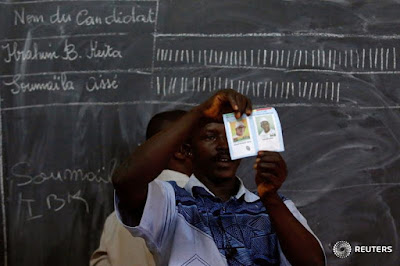 Election workers start the counting of the ballots during a run-off presidential election in Bamako, Mali August 12, 2018.   REUTERS/Luc Gnago

I just had to include a second picture from Luc Gnago as it’s just brimming with life, colour and energy.  “Don’t touch my vote,” the black on red placard screams, amid a noisy scene of the bus loaded with people and speakers thundering support, and motor cyclists weaving about the road. You can almost taste the heady atmosphere, as the woman with her tongue out seems to suggest. 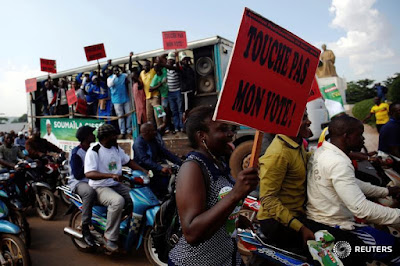 Supporters of Soumaila Cisse, leader of the opposition party Union for the Republic and Democracy (URD), carry banners as they protest along a street in Bamako, Mali, August 16, 2018. The banner reads ‘Don’t touch my vote’.   REUTERS/Luc Gnago

This picture just makes me feel good and I’m not sure why. Maybe it’s because it’s something one would not expect from Rwanda, a cycling race? Maybe it’s a sense I get, that while it may be plagued with doping scandals cycling might have an opportunity for a new start on a new continent. Or maybe it’s the sense of effort, the straining sinews of the cyclist’s leg caught in the sunlight and out of focus hands clapping encouragement that draws me to this image. 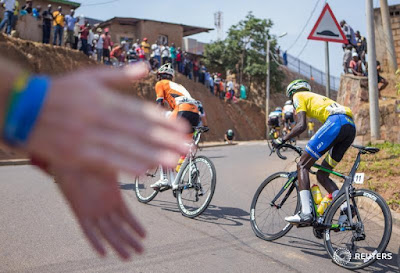 Sometimes happy accidents occur when you set out to achieve one thing and your idea changes to another. Amir Cohen set out to cover the meteor shower but the noticed in his time exposures how vehicles illuminated the road like a magical path. Working on longer exposures and hoping for a greater volume of traffic he got lucky and succeeded in shooting this wonderful atmospheric image. Incidentally, he also managed some terrific pictures of meteors streaking across the skies. 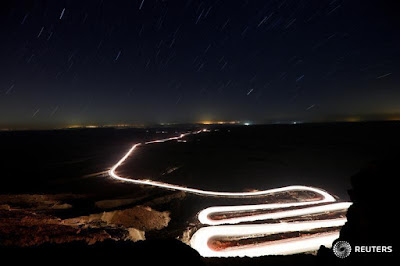 The road is illuminated by the headlights of cars being driven through the Ramon Crater near the town of Mitzpe Ramon, southern Israel, August 12, 2018.   REUTERS/Amir Cohen

Although you can see only dozens of people in Muhammad Hamed's picture, the visual echo of people's heads, getting smaller as you look to the background, in the shapes of vegetation behind makes us feel as though thousands are attending, as far as the eye can see. Maybe it's just my imagination, but it looks to me that dust thrown up by the mourners seems ghost-like as it hovers over the flag-draped body. 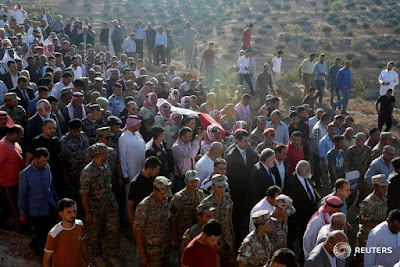 Guard of Honour and relatives of sergeant Hisham Agarbeh, of the anti-terrorist unit, who was killed in an attack, carry his body during his funeral in Birayn in the city of Zarqa, Jordan, august 12, 2018.   REUTERS/Muhammad Hamed


Zohra Bensemra’s picture looks like a combination of a Bridget Riley painting, a Matisse cut out and a cityscape still from the 1927 classic film Metropolis. The harsh light has drained all colour, reducing it almost to blacks and white. The flat black shapes of the foreground look like a cut out that has been laid on the image and once we force our way past this heavy blackness we finally get to see hundreds of people making their way from prayer. What a visual and cultural feast.  Read more from the Haj here. 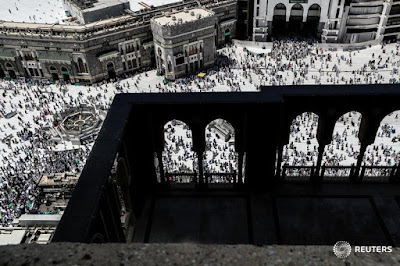 Muslim pilgrims walk out after the Friday prayer at the Grand Mosque ahead of the annual Haj pilgrimage in the Holy city of Mecca, Saudi Arabia August 17, 2018. REUTERS/Zohra Bensemra