A last minute update for my weekly round up to include Zohra Bensemra's details picture from the haj. The hands reaching across the crowds to touch against the black Kaaba that glints in the light tell the story of adoration and prayer. You can see more of Zohra's pictures here and read her account of the haj. 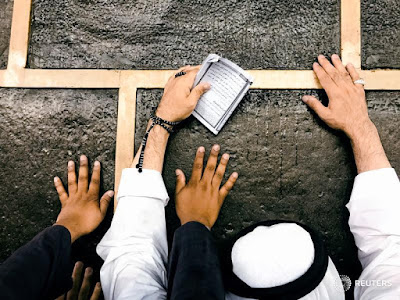 Muslim pilgrims kiss and touch the wall of the Kaaba as they perform Tawaf al- Ifada during the annual haj pilgrimage at the grand Mosque in the holy city of Mecca, Saudi Arabia August 23, 2018. REUTERS/Zohra Bensemra

Andreea Campeanu’s picture of a girl in profile standing shoulder deep in swamp waters has such a dreamlike feeling it’s hard to not make up stories as to what she is thinking about as you look at her. Her head is in perfect profile as she watches the ripples in the still water that break up the reflection of the plants in the background and her head as she moves her arm gently back and forth. The ripples serve to break up the dream as we learn from the story that she is waiting for a food drop from an NGO. 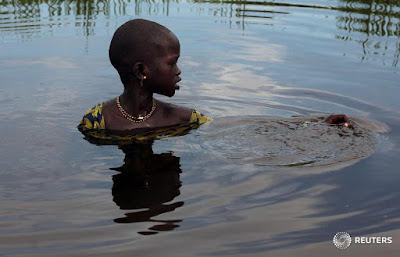 An internally displaced girl plays in the Sudd Swamp near the town of Nyal, in South Sudan august 19, 2018.   REUTERS/Andreea Campeanu

Standing under black and red drapes, beautifully robed mourners seem to whisper in the cool of the courtyard in Francis Kokoroko’s picture. Even though there is a small triangle of bright light and heat creeping through the drapes, the picture has an overall sense of cool. It takes a while to spot the figure on the right through the complex compositional web of crosses and diagonals but when you do see him he brings an even greater sense of calm and respect to the image as a whole. 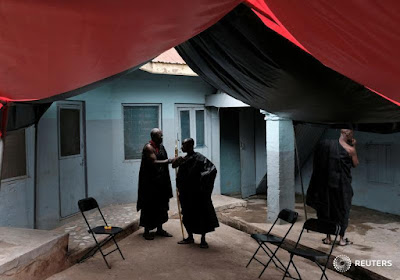 There is no escaping the sheer glee in Khaled Abdulla’s picture on the faces of the boys as they carry their goats away from market prior to the Eid celebration and feasting. The action bursts out of the frame as the boy on the right is only just contained in the image. The composition spreads out in a scalene triangular shape, its peak being the red tent in the rear of the picture. Take even more time to study the faces and small details and you will eventually notice the boys’ feet, some bare, some with sandals and some with Wellington boots. But the boys all have hopeful smiles, a rare treat in Yemen. 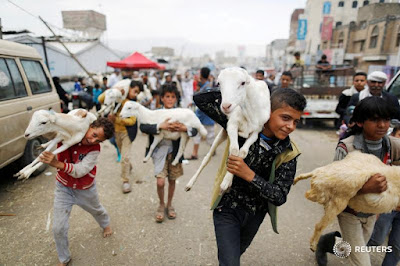 We are often faced with tough decisions of using images of children in areas of conflict who are suffering, wounded or even dead. Equally challenging is the edit when we cover stories about children who are sick. We are challenged with showing what is really happening while being respectful and preserving the dignity of those involved. Khaled Abdullah gained access to a cancer hospital in Yemen that is struggling to maintain care as the ongoing war drains access to resources and medicines. Khaled’s picture of a child who is sick with cancer is both powerful and empathetic. You can see the full story here 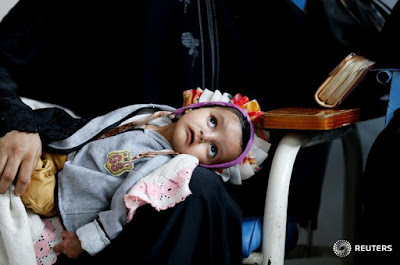 A girl with cancer lies on the lap of her mother at the national Oncology Centre in Sanaa Yemen, August 6, 2018.   REUTERS/Khaled Abdullah

I am very drawn to Amir Cohen’s picture of the couple posing for a picture for many reasons. First, I love the shape created by the women taking pictures as they lead you into the centre of the picture. Secondly, the almost classical pose the couple are assuming to have their image recorded and the way the side light falls gently on their faces, lifting the tones and drawing you to the calm and natural expression on faces. And lastly, a sense of timelessness as much of the colour is drained from the image by the evening light, leaving the picture with an almost monochromatic feel. 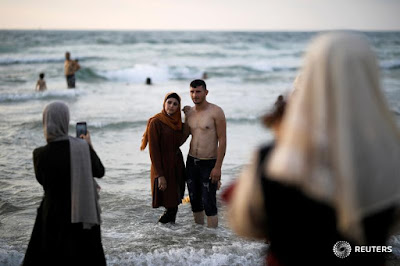 People enjoy themselves along the shore of the Mediterranean Sea during the Muslim holiday of Eid al-Adha at a beach in Tel Aviv, Israel August 23, 2018.   REUTERS/Amir Cohen

Maybe you agree, maybe not, but Tiksa Negeri’s picture of husband of wife at the IPD camp in Ethiopia put me immediately in mind of the painting American Gothic by Grant Wood, which you can see here. Maybe it’s the gaunt lines in Biratu’s face, or the slight tilt to the head of his wife or maybe it’s just the sense I get of pride and dignity in the face of hardship. An extra bonus to me is that Tiksa has kept the feet well in the frame too – pictures that cut the feet off are a pet hate of mine. You can see the story here. 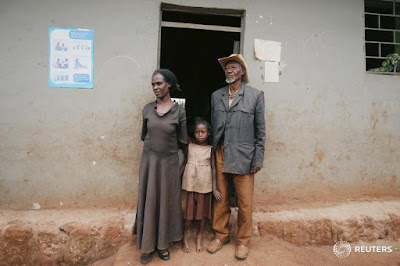 Biratu Ejersa, 73, stands in front of his shelter with his wife, Adanech Biftu, 35, and their daughter, Mazaynesh 7, in a camp for the internally displaced people in Chelelektu, town of Southern Nations, Nationalities and peoples’ region in Ethiopia August 15, 2018.   REUTERS/Tiksa Negeri

It’s the eyes of the boy in the centre of this chaotic picture by Baz Ratner that seem to look to distant horizons, or in a flight of fancy, to the future, that really make this picture stand out. Even though the pounding feet of thousands has drummed up quite a dust cloud, their vibrant coloured robes of reds, yellows, blues, greens and orange and the bright white arcs of face paint dance and cut through the murky and excited atmosphere. You can see the full story here 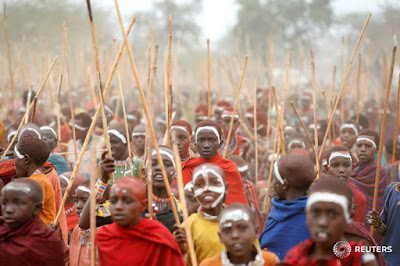 Maasai children hold sticks as they gather for an initiation into an age group ceremony near the town of Bisil, Kajiado county, Kenya, August 23, 2018.   REUTERS/Baz Ratner