A Week in Pictures Middle East and Africa October 12, 2018

Ibraheem Abu Mustafa has crouched down low to create a powerful combination of flames, black smoke and figures in his picture from Gaza. It’s worth looking deeper into the image beyond its immediate impact. At first you notice the two protesters holding their catapults at full tension, aimed at different targets. Beyond them, and to the far distance, dozens of others figures start to emerge from the smoke; some running, some pointing and others just watching, but all risking their lives to protest. Read the latest details here. 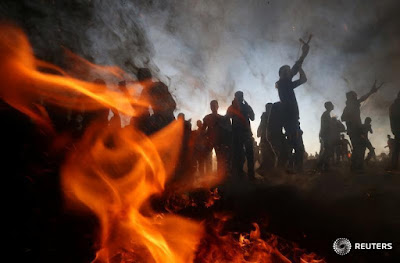 Palestinians hurl stones at Israeli troops during a protest calling for lifting the Israeli blockade on Gaza demanding the right to their homeland, at the Israel-Gaza border fence in the southern Gaza strip October 12, 2018.    REUTERS/Ibraheem Abu Mustafa

There are ways to photograph a building and there are great ways to photograph a building and it’s not often I get excited about a picture with no people in it, but Muhammad Hamed’s picture of the Monastery in Petra is just breath-taking. Like a scene from the Lord of the Rings film trilogy, the vision created by the light is spectacular and if this picture doesn’t want to make you visit Petra, nothing will. By way of explanation the September date was when this picture was shot, but it was moved on the wire this week. 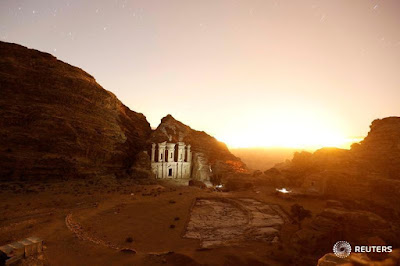 A general view of the Monastery at night in the ancient city of Petra, south of Amman, Jordan September 27, 2018.   REUTERS/Muhammad Hamed

There’s no mistaking the sadness in Ronen Zvulen’s powerful detail picture that has been carefully cropped by picture editor Nir Elias as a hand tenderly reaches out to touch the Star of David, which forms part of the shroud covering the body of Kim Yehezkel. There is no respite from the cold tones of the black cloth and the stonework, even the bare and tattooed arm looks cold to the touch. 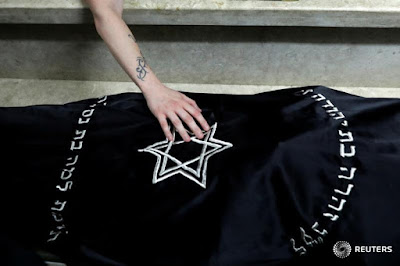 A woman touches the cover for the body of Kim Yehezkel during her funeral at the cemetery in Rosh Ha’ain near Tel Aviv, Israel October 7, 2018.   REUTERS/Ronen Zvulun

It takes more than a little while to work out what is going on in Zohra Bensemra’s picture. As you flick from white highlights to black shadows eventually your eye catches hold of the small white piece of paper suspended in the black. Then you spot the woman on the left sitting behind a lamp with her eyes sharply focused on the paper. You then get the sense of it as a ballot paper. The picture snaps into meaning – what a tough task, counting votes in a dark room, lit only with small lamps 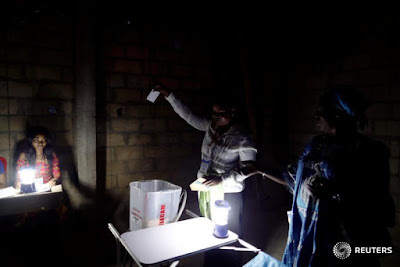 A brave decision by Amr Abdallah Dalsh to use a very wide lens to shoot Melania Trump arriving at the Great Pyramids has paid off. The stark empty landscape is populated with security as far as the eye can see. The slight V of the clouds dipping down to point to the U.S. first lady as she strides through this open space. But what I would give for another inch beneath the security guard’s foot on the right-hand side, the foot is just cut off a tiny bit, a pet hate of mine. 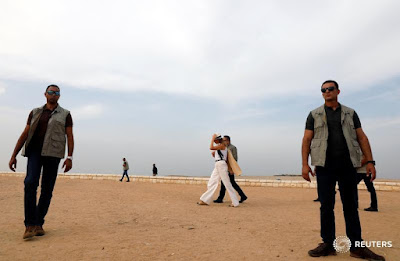 Carefully framed by silhouetted figures in the foreground we are dawn deeper and deeper into Naif Rahma’s picture by the rhythm of the school children queuing at the start of the new term. I am greatly saddened by this picture as I can’t get the notion out of my head that the silhouettes in the foreground represent the children who were killed in the air strike. This picture haunts me. Read on here 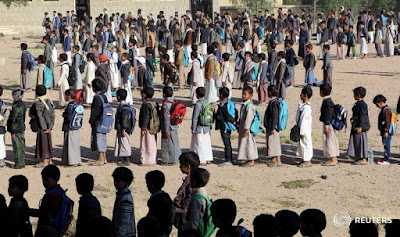 Students perform morning exercises and drill at their school which lost pupils in an August 2018 Saudi-led air strike on a school bus in Saada province, Yemen October 6, 2018.   REUTERS/Naif Rahma

When I first saw Mohamed Abd El Ghany’s picture I am sure I heard an audible ‘click’ of the player’s neck as he stretches! The warm tones of the colours, the deep shadows of the blacks and the dash of red all strongly evoke the high temperatures this athlete is competing in. His closed eyes and this sense of warmth combine to give me a sense that this refugee has relaxed, he feels he is through the worst of his difficult life; let’s hope so. It’s a story of hope, so read on here.  It’s a story of hope that took a while to shoot so read on here. 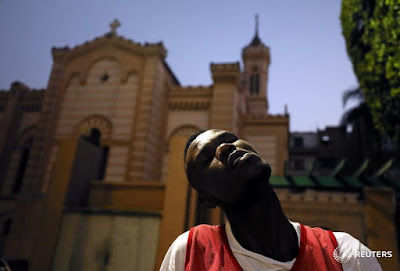 Two pictures by Ammar Awad, which were shot for the same story, are poles apart in terms of mood, and yet I can’t help but link them as they are very similar in shape and design. Both have a strong sense of a right to left sweep of movement, both have three main female figures and the dashes of colour that catch your eye are the pinks and pale purples. I fear that seen together the pictures may convey a sense of youthful hopes that are later dashed. You decide, read on here 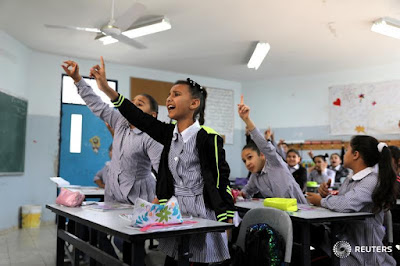 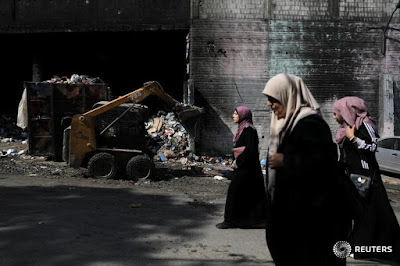