Look at me! Listen to my protest! is the message from this picture from Sudan. The flame licking into the half-light of the evening highlights the protester’s glasses and open mouth so that he takes on the momentary appearance of a fire-breathing dragon. Once your eyes get used to the bright light of the flame you can see the thousands of protesters in the background, stretching into the horizon of the evening gloom. 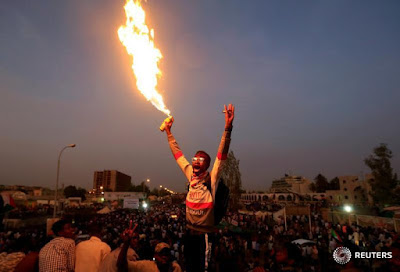 A Sudanese demonstrator chants slogan as he attends a sit-in protest outside the Defence Ministry in Khartoum, Sudan April 14, 2019.    REUTERS

A big, fun yellow picture, a big smile, curls of hair and hands emerging from a mist of yellow powder. The only other real colour is the red mask guiding us to the laughing eyes of the person on the right. There is no way you can look at this picture without feeling the warmth of a smile. 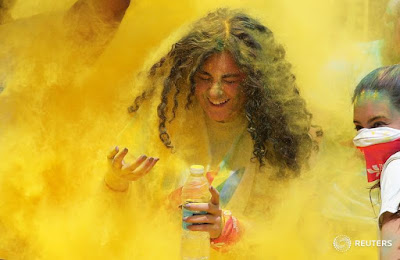 Ali Hashisho’s picture has a feeling of a post-apocalyptic scene as three unidentified figures stand framed in a ruined building, looking across a cityscape at storm clouds in the distance. Are they gathering or clearing? The dash of warm sunlight on the broken concrete pillar to the left gives us some hope. 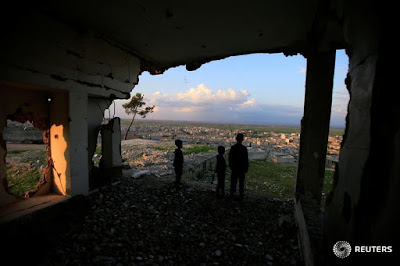 Children stand together inside a damaged house in Kobani, Syria April 3, 2019.   REUTERS/Ali Hashisho

Omar Sanadiki’s pictures need a little text to help explain them. On the face of it, we see ruined buildings with vegetation. So what? Now understand that this peaceful verdant scene was recently the scene of fierce fighting in Aleppo, Syria. I include two images from Omar, because the pictures need some explanation. The most colourful image, with reds and yellows, just does not have enough buildings to illustrate the context of the story. So much for the adage ‘a picture paints a thousand words’. Read on here. 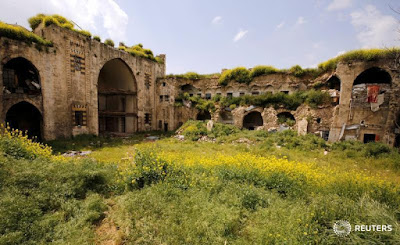 Blossomed vegetation is seen over damaged buildings and the ancient citadel during a warm day of spring in the old city of Aleppo, Syria April 9, 2019.   REUTERS/Omar Sanadiki 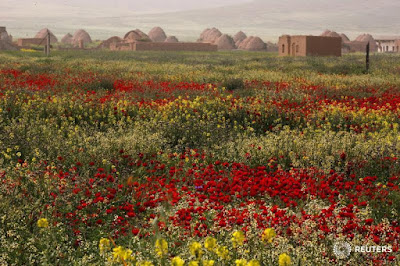 What a wonderful picture by Umit Bektas as he plays with scale and space. Almost a silhouette, but thankfully not. Your eye is drawn quickly to the figures in the trees, a flag extended as it is waved back and forth. These men look far too big to be safely in the tree, and maybe this sense is created by the open space above them or the line of figures beneath them. See more from Sudan here 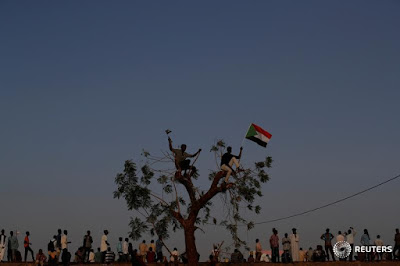 Sudanese demonstrators wave a flag after climbing a tree outside the Defence Ministry in Khartoum, Sudan April 16, 2019.   REUTERS/Umit Bektas

It’s just a lot of fun, people hugging, laughing and enjoying a moment perfectly captured by Luc Gnago as Ivanka Trumps visits Ivory Coast amid a myriad of dancing shapes, colours, stripes, patterns and smiles. Normally these visits are very stiff and formal but this breaks the mould. 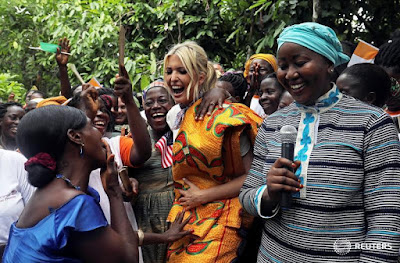 Baz Ratner’s image is a little unsettling. I think the obvious reason is the figure wearing full bio protective gear walking behind the woman and the child seemingly unnoticed. What can be going on that this this gear is needed but there is a child unprotected? This then brings you to the full-on eye contact from both the woman and the child. You are drawn into the picture and it’s then you begin to notice that the only natural elements in this image are the uncovered faces. Plastic gloves, plastic clothing, plastic mask, plastic background and plastic fencing in the foreground. It all feels very unnatural and in this environment you are captivated by the eye contact, and that is unsettling. Why aren’t these people protected too?  Read on here to discover the story of those who survived Ebola caring for children with the killer disease. 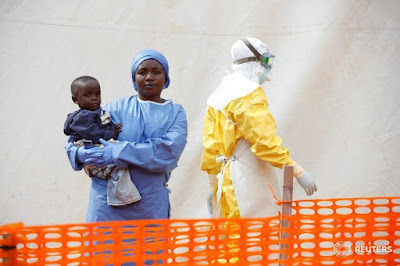 Mwamini Kahindo, an Ebola survivor working as a carer to babies who are confirmed Ebola cases, holds a child outside the red zone of the Ebola treatment centre in Butembo, Democratic Republic of Congo, March 25, 2019.    REUTERS/Baz Ratner

To describe Mohamed Abd Al Ghany’s picture of an old book as lush - very rich and providing great sensory pleasure - might be a step too far but it’s the word I kept coming back to when looking at this detail picture. The warm tones of the aged pages, wrinkled with time, make us want to touch the book. The clever crop, so you can’t see all the book, ensures we spend time looking at the ancient text, which is quite exquisite. You can see more artefacts and the restoration project here. 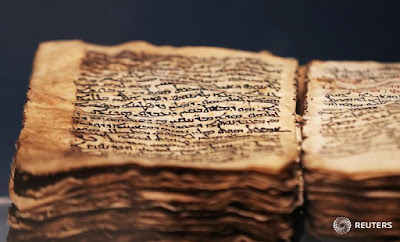 Hard to ignore the wonderful beam of light in Ammar Awad’s picture of clergy during Holy Week in Jerusalem. Equally hard to ignore is the candle-lit procession of worshippers in the Holy City. These pictures really speak for themselves so I will let them do just that. 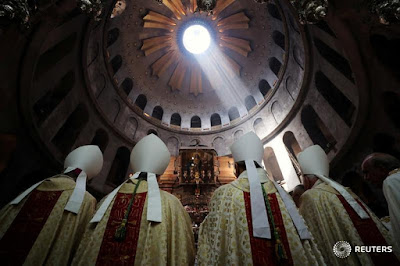 Members of the clergy take part in the Catholic Washing of the Feet ceremony on Easter Holy Week in the church of the Holy Sepulchre in Jerusalem’s Old City, April 18, 2019.   REUTERS/Ammar Awad 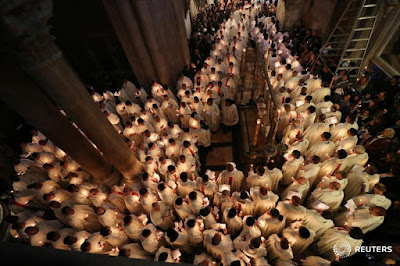 Worshippers take part in a procession during the Catholic Washing of the Feet ceremony on Easter Holy Week in the church of the Holy Sepulchre in Jerusalem’s Old City, April 18, 2019.   REUTERS/Ammar Awad