An uncomfortable collection of colours immediately puts the mind ill at ease in Baz Ratner’s picture. Yellows, orange, greens, grays and purple, something feels instinctively not right. The people in the image are covered from head to toe in heavy protection equipment. The object of their focus, a purple coffin. We are right to feel ill at ease as these workers are carrying away another victim of Ebola. Read on here 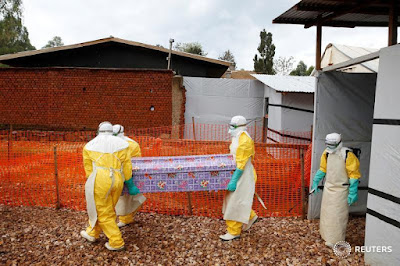 Workers dressed in Ebola protective suits carry a coffin with the body of a woman who has died of Ebola, as it is transported for burial from the Ebola Treatment Centre in Butembo, in the Democratic Republic of Congo March 28, 2019.  REUTERS/Baz Ratner

Tension in Sudan is high with people coming out on the streets to protest against Bashir’s government. Taking pictures is not easy for fear of arrest. A protester’s hand raised in a peace or maybe victory sign dwarfs the figures on the flyover in a slightly bizarre David Byrne of Talking Heads video distortion of scale. Each finger is the same size as the figures on the bridge, almost as if it’s reaching out to obscure them. Latest from Sudan here 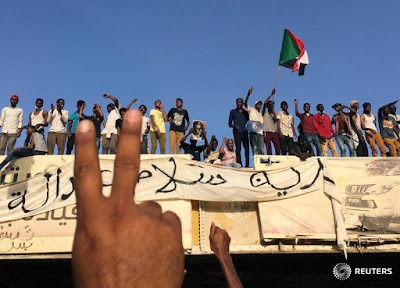 Sudanese demonstrators chant slogans and wave their national flag during a protest demanding Sudanese President Omar Al-Bashir to step down outside the defence ministry in Khartoum, Sudan April 8, 2019.   REUTERS

Only days later the tension is broken. Crowds carry soldiers on their shoulders after the announcement that Bashir has been removed from power by the army. The picture is crammed full of noise, heat and energy. You can’t look anywhere without seeing hands, arms, phones, flags and faces all celebrating the news. Slightly counter intuitively, I like that you can’t see the face of the soldier as this forces you to look around the whole scene. If you could see his face your eye would zoom in on that and you’d miss out on the collective relief and the noisy celebration of the crowd although of course, many on the streets are wary of the latest announcement, saying they want a civilian government. 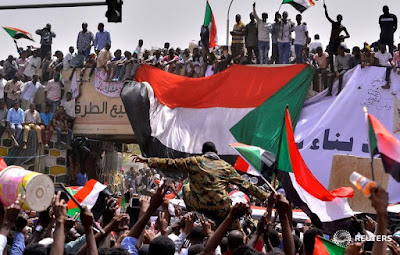 A military officer is carried in the crowd as demonstrators chant slogans and carry their national flags, after Sudan’s Defence Minister Awad Mohamed Ahmed Ibn Auf said that President Omar al-Bashir had been detained ‘in a safe place’ and that a military council would run the country for a two year transitional period.  REUTERS


To shoot a whole story where the faces of your subjects must not be identifiable is not easy. Essam al-Sudani has cleverly used a poster on the wall to make you feel that you are being looked back at in his picture even though the main subjects’ heads are covered in towels. When you look at the poster closely you soon realise that it too has a sense of being obscured because the face is a composition of two images. You can’t really see any faces and you feel you are trying to look at something or somebody that is hidden, a perfect way to illustrate the fight against the drugs trade in Iraq. It’s taken months to publish this story (hence the December date) but well worth the wait. You can read on here 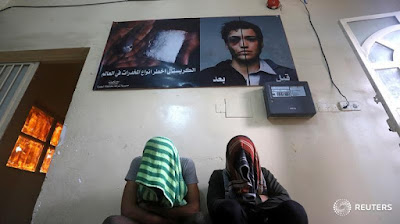 Iraqi suspects who were arrested for drug-related crime are seen at a police station in Basra, Iraq December 18, 2019.  REUTERS/Essam al-Sudani

Mohammed Salem’s use of a bold portrait format to look at those who have lost limbs in Israel-Gaza border clashes during the last twelve months works in its simplicity. It’s been deliberately shot very dark. You need to fight your way into the image to seek out the details in the shadows. Only once you are there, do you notice the determined look on their faces and then the damaged and broken bodies. Read on here 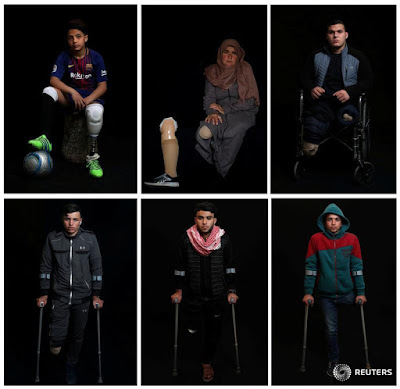 A combination picture shows Palestinians who, according to medics, lost their legs after being shot by Israeli forces during protests at the Israeli-Gaza border, posing for pictures in Gaza March 13 and 16, 2019.   REUTERS/Mohammed Salem

I am attracted to Ronen Zvulun’s picture as it looks like it is from a bygone era. A suited booted and tie-wearing politician is drumming up support from a soapbox on the election campaign. It’s more the shape of the crowd and the shop venue that give this impression. Once you begin to inspect the crowd of ‘potential voters’ most are revealed to be security staff or people armed with smart phones, bringing us sharply back to the modern age of digital political husting inside a ring of security. 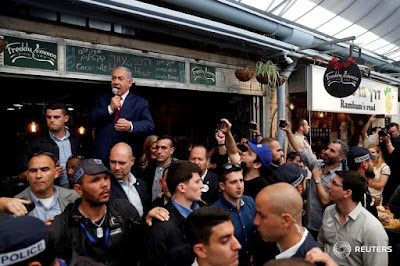 It takes just a little time to spot the enormous tear that is rolling down Maria’s face in Zohra Bensemra’s moving picture. The solemn moment of grief slowly wells up as we study the image. The soft light on her face and the cool blues of her clothing set the sad tone. We want to know more, we need to read on, and we know her story is sad. See Zohra's full story here 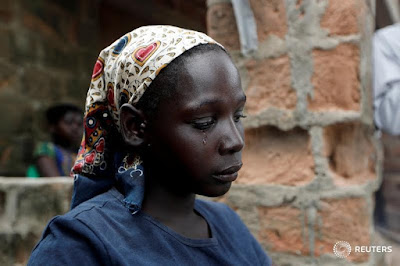 A tear falls down the face of maria Jofresse, 25, during an interview at a camp for the displaced in the aftermath of Cyclone Idai, in John Segredo, near Beira, Mozambique March 31, 2019.  Maria lost her two children to the storm.   REUTERS/Zohra Bensemra

There’s no mistaking this father’s grief as he buries his daughter in Khaled Abdullah’s picture from Yemen. Your eye is drawn immediately to the father’s face as he screams to the heavens. What you see next is his hand tightly gripping the funeral shroud. From this point you start to study the faces around this distraught man. Light is thrown up from the shroud warming the tones of the three faces immediately to the right. You don’t notice the TV camera in the shadows as your eye moves through the crowd. Eventually you end up at the figure at the top left, his arm and fingers guiding you back into the picture and to the father’s grief. There is no escape. 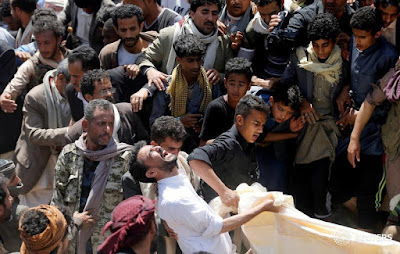 A man reacts as he lowers the body of his daughter to a grave during the burial of people who were killed by a blast in Sanaa, Yemen April 10, 2019.   REUTERS/Khaled Abdullah

A heart-warming series of pictures of twins by Afolabi Sotunde. Hard to single one out as they all quite fun but I do like the simplicity of the composition of the two boys who pose in the equally divided picture. It’s only the difference in the boy’s shorts that stops us from being fooled into thinking that this might be a mirrored image. You can enjoy the rest of the story here 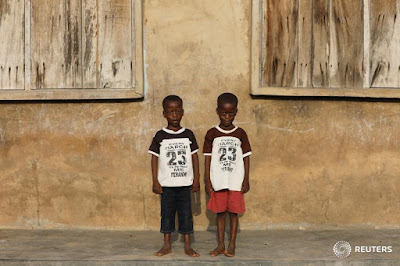 It would of course be quite fitting to use an image of bleached skulls to illustrate the 25th anniversary of the Rwanda genocide. Or maybe the torch lighting by heads of state, or  even any of the many images from the ceremony itself. But I think Baz Ratner’s simple silhouetted image of people arriving for the commemoration speaks volumes. An indeterminate number of unidentifiable people solemnly set against a blood-red sky seems a fitting tribute to the thousands who died. See more from the ceremony here 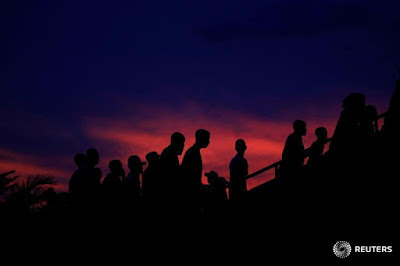 Participants arrive to a night vigil during a commemoration ceremony marking the 25th anniversary of the Rwandan genocide, at the Amahoro stadium Kigali, Rwanda April 7, 2019.    REUTERS/Baz Ratner

There is no avoiding the emotive issue of what to do with the children of ISIS fighters once you have seen Ali Hashisho’s poignant picture of a tiny pair of feet belonging to a malnourished child in Syria. Such a simple picture, a globally recognisable image of innocence, these could be the feet of any child. The narrow depth of field throws the rest of the baby out of focus but we get the sense it is not sleeping comfortably. The picture begs the question, what next? Read on here 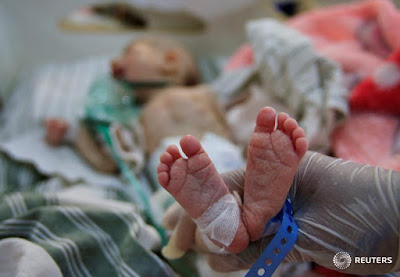 A child of an Islamic State fighter, who suffers from malnourishment, sleeps at a hospital in Hasaka, northeastern Syria April 6, 2019.   REUTERS/Ali Hashisho

From his many terrific pictures of the demonstrations in Algeria I have selected one by Ramzi Boudina that answers the question: what does it look like when you are hit with a water cannon? It is not the most compositionally beautiful image and the white vehicles in the background are a bit of a distraction, but you get a real sense of being in the moment, which what great news photography is all about. More from Algeria here 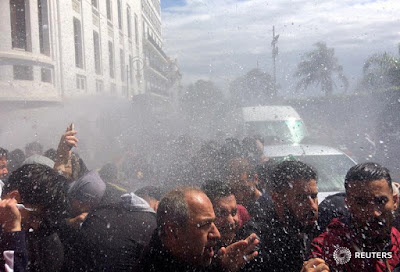