Light streaming through holes into a smoke-filled workshop is going to work as a picture every time. What Mohammed Salem has done is to show a worker walking through the rays of light, the timing perfect so the beams of light don’t cut across his face. Enjoy this peaceful, calm image of daily toil. 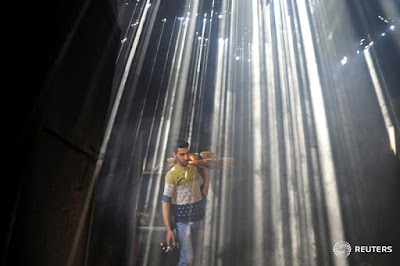 A Palestinian worker carries clay pots as sun rays penetrate through the ceiling of a pottery workshop in Gaza City June 11, 2019.   REUTERS/Mohammed Salem

In complete contrast of mood, but taken on the same day as Mohamed’s picture above, the grief in Ibraheem Abu Mustafa’s picture crashes into your consciousness and leaves you with a feeling of desperation and sadness. The boy’s hand tenderly touches his dead father’s face as he looks down weeping and distraught, his other hand gripped tight in tension as he is lifted above the chaos of the funeral. We can only guess at the feelings going through the boy’s mind, but this sad and powerful moment is captured forever. 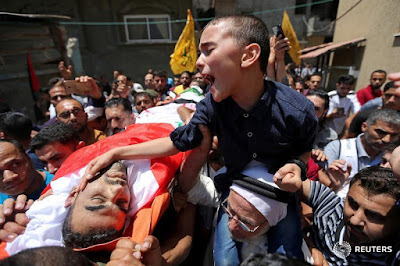 The son of Palestinian paramedic Mohamed Al-Judaily, who died of wounds he sustained during a protest at the Israeli-Gaza border fence, reacts as he looks at his father’s body during his funeral in the central Gaza strip, June 11, 2019.   REUTERS/Ibraheem Abu Mustafa


I won’t attempt to lift the spirits after Ibraheem’s picture but will bombard you with more distressing news and raise an ethical issue with an image from the same day as those above. A village in Mali was attacked, with the death toll ranging from 35 to nearly 100 depending on who was citing the numbers. What was agreed is that more than 20 children were killed. We have images of the dismembered and charred bodies but they are considered too distressing to publish. To give a sense of the death and destruction we published this poignant image below, the dead body of a thin farm animal, ashes all that is left of building. You get a sense of what happened without being exposed to the grisly images of dead people. It’s always hard to decide what should be seen in such instances – after all, who wants to see dead children? Or is this a case that calls for “seeing is believing” and for the publication of the images? I think not. Read on here 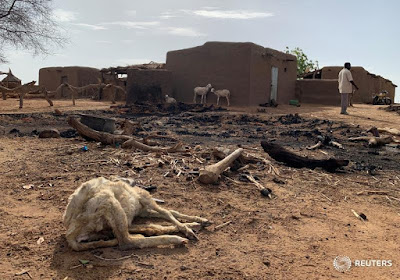 A dead animal is seen amidst the damage at the site of an attack on the Dogon village of Sobane Da, Mali June 11, 2019.    REUTERS/Malick Konate

A very nicely seen image by Baz Ratner at a mock funeral by environmental activists. You eye is drawn quickly to the clever black and white logo pasted on a fake black coffin. The only real colour of the image, the red of the protester’s nail varnish, holds g our attention. Your eye then moves right in the frame to see her masked face, her eyes serious as she carries her message. 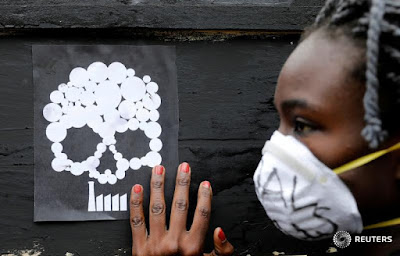 Greenpeace environmental activist carries a fake coffin during a protest against the construction of a coal fired electricity plant in Lamu on Kenya’s coast, during a protest in Nairobi, June 12, 2019.    REUTERS/Baz Ratner

I am a big fan of simple shapes and strong lines in composition. Add a strong red colour with a hint of complementary green and the sound of a military band, as Afolabi Sotunde has done, and he hits all the right buttons. If I was after perfection I would have liked a little more space on the top right, so the arm of the leading soldier pointed into the corner of the frame and we would not crop off the small figure, also in green on the right. 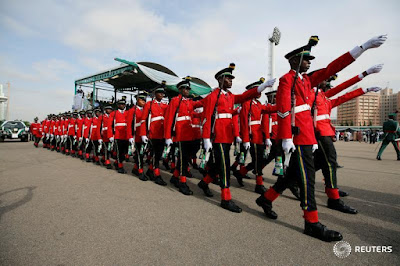 Police officers are seen on parade during the new Democracy Day, a national holiday in honour of late M.K.O Abiola, in Abuja, Nigeria, June 12, 2019.  REUTERS/Afolabi Sotunde


Samuel Mambo’s picture structure is all about sharp edges and it has an eerie feel to it. The clean corner of the wall, the strong wide V-shape line of the path, the white highlights of the workers’ clothing against the background shadows and, if you look carefully, the fold lines in the newly opened aprons of the medical staff. Staff are getting ready to fight Ebola. The uneasy feeling is created by compositionally awkward position of the figures in the chopped-up space and the man’s gloved hands that are clasped together, giving the image a pensive feel. Read on here 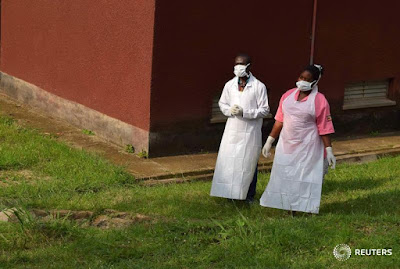 Ugandan medical staff are seen as they inspect the Ebola preparedness facilities at the Bwera General Hospital near the border with the Democratic Republic of Congo in Bwera, Uganda, June 12, 2019.   REUTERS/Samuel Mambo