Anger flares in Mussa Qawasma’s picture that has a feeling of being bad tempered, hot and sweaty. A strong oval and diagonal composition created by the helmets and position of the arms draws us into the centre of the image. The strong sunlight catches the sweat on the face of the man who is held back by his friends as he confronts the Israeli forces. 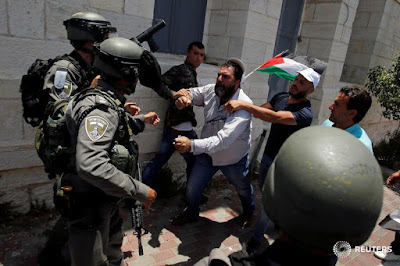 A Palestinian demonstrator scuffles with Israeli forces during a protest against Bahrain’s workshop for U.S peace plan, in Bethlehem, in the Israeli occupied West Bank June 25, 2019.   REUTERS/Mussa Qawasma

I’ve selected Mohamed Abd Al-Ghany’s football celebration for no better reason that it’s just fun and a lovely shape. The players look like a well-rehearsed dance troupe coming on stage for the opening of a show. Do they practice these moves?  Who knows? But whatever they do it works, it’s fun and makes a great lighthearted picture. 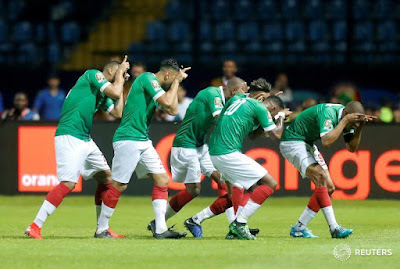 Deeper and deeper and deeper you are drawn into Umit Bektas’ picture of the boy posing for a picture, through the U-shaped curve of the camel’s neck, past the armed soldiers to the people on camels in the distance. The clean skyline ensures we are not distracted by any visual noise. 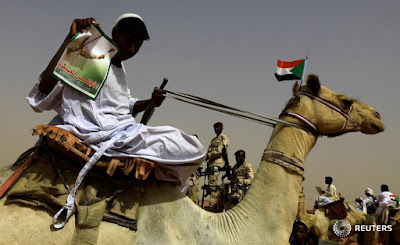 A supporter of Lieutenant General Mohamed Hamdan Dagalo, deputy head of the military council and head of parliamentary rapid Support Forces (RSF), holds his portrait as he rides his camel before a meeting in Aprag village, near Khartoum, Sudan June 22, 2019.    REUTERS/Umit Bektas


Okay nit-pick time, how much on a scale of 1-10 do you think Baz Ratner would like the foot of the soldier in the centre of the picture not be to be covered by the soldier in the foreground? I am prepared to bet about 9. It’s almost as if the soldier is looking down at the offending appendage in this otherwise perfectly balanced image. 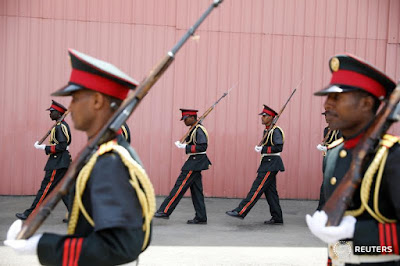 Often the most eye-catching subject is an object out of context, a boat on a roof or a car in a swimming pool. An upside-down tank in a stream also fits this category, especially when it is photographed with a slow exposure so the water blurs to give it a rather mystical and dreamlike feel.  Ronen Zvulun’s picture is part of a series of pictures titled “Land Scars”, that documents sites, buildings and objects that all form part of the long history of conflict and failed peace processes in the Israeli-Palestinian conflict. The series has taken weeks to shoot and was published to mark the start of the Bahrain Workshop, the latest attempt to break the deadlock.You can read on here. 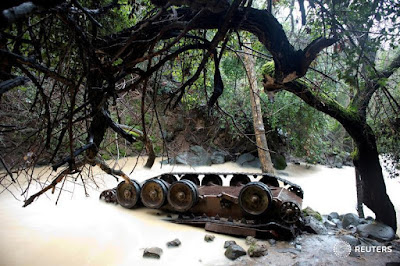 A Syrian tank lies over turned in the Hermon steam in Banias Nature Reserve on the western edge of the Israeli-occupied Golan heights February 27, 2019.   REUTERS/Ronen Zvulun


There is no escaping the strong symmetrical shape to Tiksa Negri’s funeral picture. The rope holding the coffin and the compositional lines created by the people lowering the coffin form almost perfect diagonals that lead your eye from the corners of the frame to the grave. It gives the image a strangely serene feeling, but take a moment to look at the struggle, pushing and shoving that is taking place on the outer reaches of the image, nothing serene there. Now consider the effort it must have taken Tiksa to get into the position to shoot this perfectly shaped image. 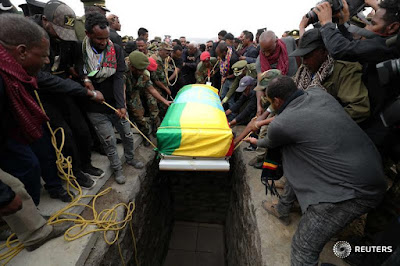 
A cold, lonely and painful image by Ismail Zitouny from Libya created by the blues of the wall, the cold white light and a complex, busy composition. Your eye wanders around the messy image trying to make sense of the tubes, cables, a confusing vertical shape and a slight tilt to the horizontal lines all of which add to your sense of unease. It’s then that you spot the injured solder, laid out flat, alone and bloodied on what looks like a very uncomfortable bed. A second soldier, goes almost unnoticed on the bed on wheels but at least he has a slightly thicker mattress to lay on. 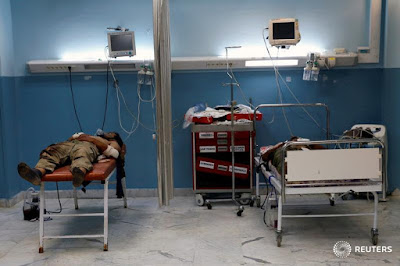