It’s too hard to choose a single image from a series of pictures the team shot at the Africa Cup of Nations to show the emotions around a goal being scored, so I’ve picked two – from  anguish to jubilation. Francis Kokoroko’s picture of the stunned faces for me says it all, open-mouthed utter disbelief. The curve of the shadow folding in closer and closer to the fan in centre of the image. I imagine this stunned look went on for quite a few seconds, giving Francis time to maybe even reposition himself to get a better angle to work the light. 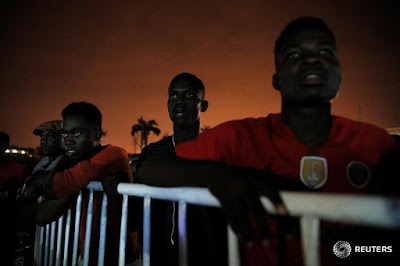 Football fans react after Tunisia’s Rami Bedoui scored an own goal during their Africa Cup of nations (Afcon) match against Ghana, as they watch the match on a screen in Elmina, Ghana July 8, 2019.   REUTERS/Francis Kokoroko

On the other hand Zohra Bensemra would have had no time at all to capture the rapturous  excitement in the boys’ faces as they celebrate a goal. The direct eye contact means you are right there in this moment of manic joy. To see the rest of the images click here 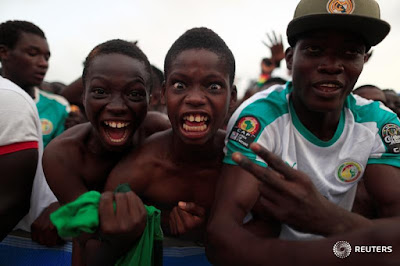 Senegal fans celebrate after Sadio mane scores a goal during the Africa Cup of Nations (Afcon) Round of 16 match against Uganda in Dakar, Senegal July 5, 2019.    REUTERS/Zohra Bensemra

Corinna Kern’s picture is a “what on earth is going on here?” picture which makes you want to know more. Corinna, who has been working on this project for several weeks, has avoided the temptation of shooting this too tight on the masks of the performers. Instead she lets the black frame of the doorway draw you in. The benefit of this is that we get to see the stark “stage”, which is actually a bus station. It’s at this point we realise this image is almost monochromatic. Read on here for more quirky images. 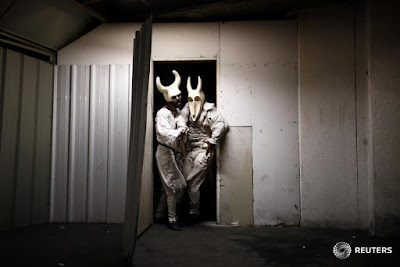 Lior Avshalem, 42 and Rotem Cohen, 41 actors from the Mystorin Theatre Ensemble, perform is the group’s show ‘Seven’ a site specific act that uses all seven floors of the Central Bus Station in Tel Aviv, Israel may 25, 2019.    REUTERS/Corinna Kern

An almost intrusive picture taken by Olivia Acland using a wide-angle lens forces the viewer into the space and mind of the woman who is being tested for signs of fever, a symptom of Ebola. She avoids our stare, but we get a such a powerful sense of fear and apprehension that we hardly notice the visual noise in the background. 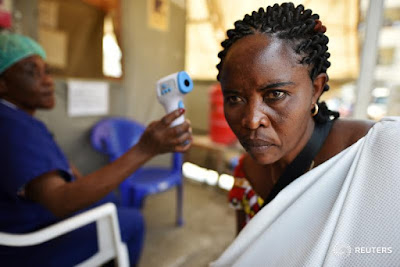 A health worker checks the temperature of a woman as part of the Ebola screening when entering the General Hospital in Goma, Democratic Republic of Congo July 15, 2019.    REUTERS/Olivia Acland

The colours, line of design and shape in Cooper Inveen’s picture are just irresistible. The line of the hedge sends your eye racing to the focal point of the girls sheltering under a red umbrella. If the diagonal line of the hedge was not enough we have the run of glistening water on the muddy track to also draw us to the huddle of girls. The complimentary colours of red and green shimmer against each other while the warm  tones in the road and clothing counter the damp weather. Ideally, the post behind the trees wouldn’t be there, but the world is far from perfect. Read about Mariatu Sesay here. 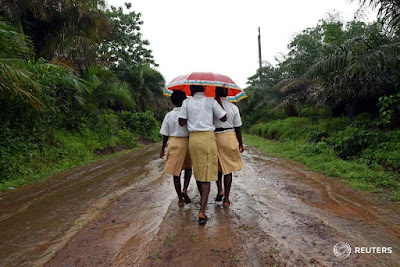 Cold and stark is probably the best way to describe Ahmed Jadallah’s image of the aircraft carrier USS Boxer. The tones are grey and cold, all colour has been bleached out of the image by the strong overhead and slightly hazy light. Our eye moves away from the menacing black shape of the vessel, looking for warmth in the empty space, but all we see is a tanker in the distant haze. 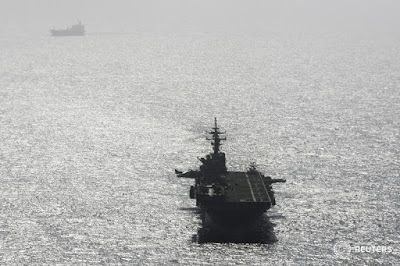 Tiksa Negri’s image is a potent display of political defiance: a youth leader, draped in a flag, stands in front of a sea of faces that stretches back to the far horizon. For me the power of the scene is in the fact everyone is seated on the ground, you sense that the crowd is silent, listening. The clean colours and vertical lines of the flag cape cut through the sea of faces, the top line of the flag matches the horizon, the youth’s head is almost lost in the background of the trees. 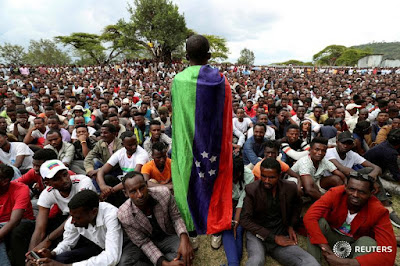 A Sidama youth leader carrying a flag addresses people as they gather for a meeting to declare their own region in Hawassa, Ethiopia July 17, 2019.   REUTERS/Tiksa Negeri

I kept coming back to Mohamed Abd El Ghany’s image and I wasn’t sure why. It doesn’t have people in it, but the eye on the sarcophagus seems to follow you around the room, like something out of a B horror movie. I took the time to look harder, then it struck me: the face looks like that of a child who has just woken up too soon and is in that mysterious transition period between sleep and wakefulness. What do you think? 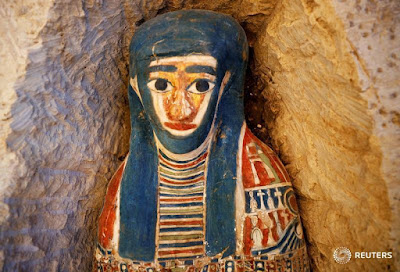 A sarcophagus that was discovered during archaeological excavations near the King Amenemhat II pyramid is displayed during a presentation of the find, south of Cairo, Egypt July 13, 2019.   REUTERS/Mohamed Abd El Ghany


Shafiek Tassiem’s picture has an air of tension about it. Perhaps obvious since it shows   two soldiers in full gear on the paved streets, but I think it’s more than the obvious that creates this feeling. Maybe it’s the clever symmetrical composition using the barred windows, the soldiers placed equally apart. Maybe it’s the line that cuts the image horizontally in half that is not comfortable for the eye?  Then there’s the slow shutter speed blurring the figure in the foreground, so the person seems to be hurrying past. I’m still not sure but looking at this image I feel apprehensive. 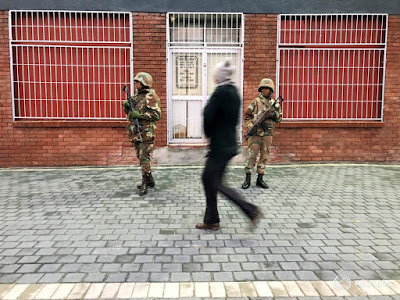