A stark and simple portrait by Umit Bektas with the subject staring you right in the eye. She is isolated in the foreground by strong highlights with the background falling into shadow. Her unfaltering stare is strong and determined, but her body language defensive, which leaves us wanting to know more. She is one of many women who were beaten and abused in Sudan during their fight for freedom. Read on here 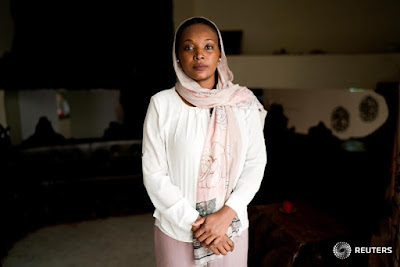 When you look at Clarel Faniry Rasoanaivo’s picture it’s hard not to hold your breath. Every element is frozen in time, waiting for the next explosive second. The keeper is poised for the shot, the goal mouth gaping open except for his tiny figure. The striker’s toes are curled up in sandals, their shadow falling on the ball. His right leg is bent back ready to release the shot, and his hand reaches down into the frame for balance, just filling the blue space of the sky created by striking leg. We all know what’s going to happen next, but the anticipation is wonderfully captured in this warm picture. 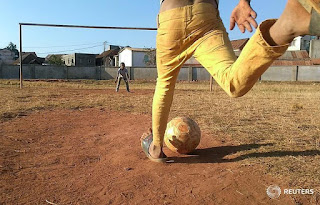 What better way to mark the first anniversary of the peace agreement between Ethiopia and Eritrea than a quick game of football, with junked buses and trucks marking the edge of the pitch. A wonderfully hopeful and well seen picture by Tiksa Negeri that gives me the feeling that what was bad is in the past and now is the time to look forward to better things, even if you are playing football barefoot in the dust. 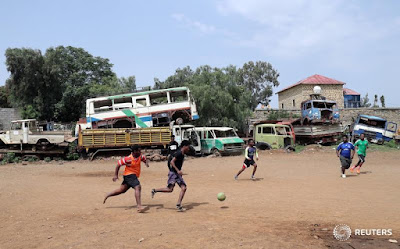 Eritreans play soccer as they celebrate the first anniversary of the reconciliation of Eritrea and Ethiopia in Mekele. Tigray Region, Ethiopia July 7, 2019.   REUTERS/Tiksa Negeri

A strong composition of diagonal lines making up an extended triangle gives Ako Rasheed’s picture a very solid and powerful feel. And that’s even before you take on board the subject matter. In step, these women soldiers march forward, weapons trained on an imaginary enemy, a solid and powerful force. 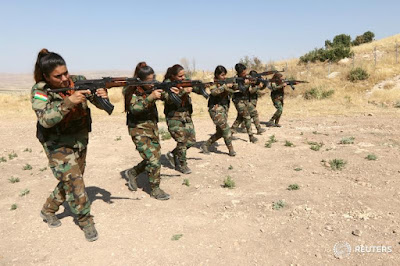 A group of Iranian Kurdish women, who have joined Kurdish Peshmerga fighters, take part in a training session in a military camp in Erbil, Iraq, July 9, 2019.    REUTERS/Ako Rasheed

I have no idea just how long Sumaya Hisham had to wait, or how many frames it took, to get this perfectly framed moment. Whatever it took it was worth it. Like someone coming up for air in a sea of blue, this fan wearing giant yellow glasses is momentarily glimpsed, mouth open, singing at full volume. Catch up with the latest from AFCON here 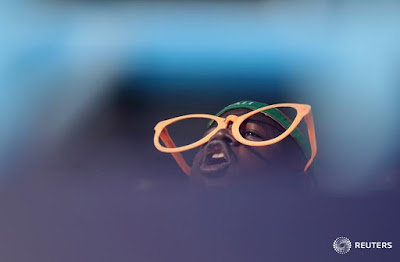 A Mali fan sings prior to their Round of 16 Africa Cup of Nations match against Ivory Coast in Suez, Egypt, July 8, 2019.    REUTERS/Sumaya Hisham

If I said zig zag zig zag you’d know exactly what I was going on about with Amir Cohen’s picture. Now take the time to look carefully. He shot this using a low shutter speed so the sea has blurred to appear like a deep purple carpet, allowing us to see details that would otherwise fall into deep shadow during this half-light time. Some of the figures have blurred too, but not the central focal point of the seated figure, who sits there, static and immovable, like King Canute. 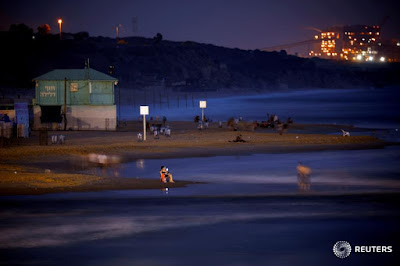 A power station is seen in the background as beach goers are seen along the shore of the Mediterranean Sean in the evening at a beach in Ashkelon, Israel July 7, 2019.   REUTERS/Amir Cohen

A simple crowd-pleasing optical illusion from Mohamed Abd El Ghany is an easy pick for the week, hard to choose as there have been so many great images from AFCON. What makes this work so well as an illusion is that player Adrien Melvin seems to be watching the line of the giant ball and not the actual ball, and his leg position just could not be better. 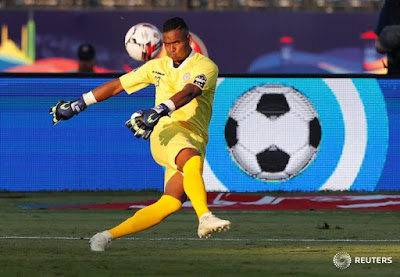 It would have been good enough for Mohamed Azakir to photograph the workers framed through the broken windows as they demolish huts, the hammer poised in mid-air and clear to see. But to have the boy in the shadows watching gives the image added strength and mood. It changes it from a ‘men at work’ image to ‘a home being destroyed’ image. 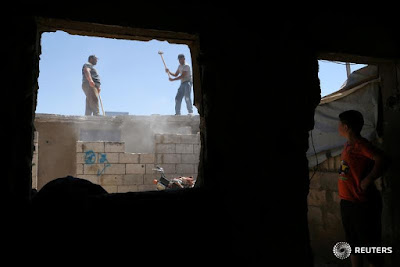 I am not a great fan of ‘people walking past a picture’ to make a picture, but there is no getting away from the graphic immediacy of Nazanin Tabatabaee’s image. You are in no doubt about where this is, nor are you in any doubt about the political message in the mural, so given the tensions between Iran and the United States, it’s a very good illustrative image. 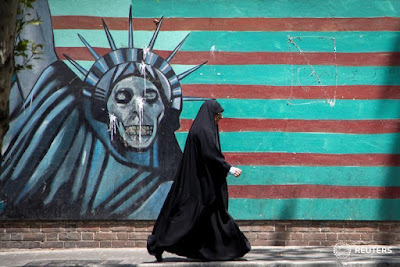 A woman walks in front of a mural depicting the Statue of Liberty in Tehran, Iran, July 7, 2019.  Nazanin Tabatabaee/WANA (West Asia News Agency) via REUTERS