This month sees the 400th anniversary of the first slaves transported to North America from Africa. I have chosen four images from one story as the whole series is quite striking. You can see the full story here.

Strong, flat shapes bear down on the solitary figure looking out to sea in Afolabi Sotunde’s beautifully composed image. The oppressive black tones seem to muffle and squeeze all the sound and air from the picture and we are left wondering what this man is thinking. Slowly we can breathe again as we look back to the blue window on the right and then beyond the figure to the far horizon. 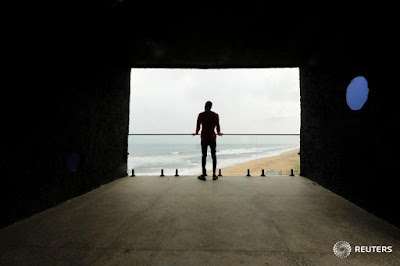 A man looks out from a sea viewing commemorative building that is known locally as ‘the Tunnel’ that is sited near the ‘Point of No Return’ where slaves were shipped from the slave port of Badagry, Nigeria June 21, 2019.  REUTERS/Afolabi Sotunde


You get a full understanding of the adage ‘still waters run deep’ in Luc Gnago’s eerie and slightly unnerving image of people gathered by the water’s edge. Although the almost perfect reflection is beautiful, you sense something not good has happened here. The trees, bushes and dark waters dwarf the gathered group, clouds have moved across the sun, which casts a shadow of flat light that gives the image a cold chill. 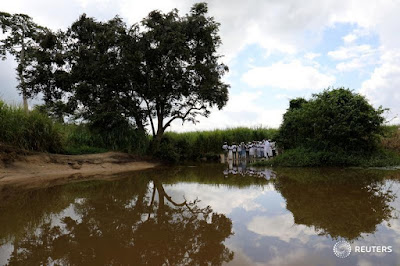 Villagers take part in a bathing ritual at the Bodo river in the Kanga Nianze village in Tiassale, July 21, 2019, that was built on a former slave route where men and women captured and sold into slavery took their final bath before their sea journey to America.   REUTERS/Luc Gnago


That eye contact in Zohra Bensemra’s picture will not let you look away. Your glance might flick up to the highlight in the background along the gloomy, damp passageway but quickly you are drawn back. It’s then you notice the USA inscription, but only for a minute, and then back to those eyes. 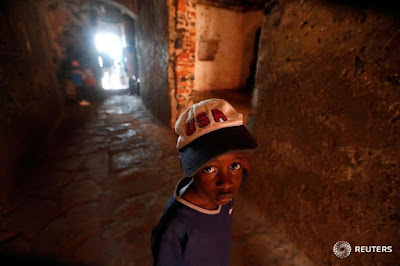 A Senegalese boy walks from the ‘Door of No return’ as he visits the ‘Maison des Esclaves’ slaves house, a gathering point from where slaves were shipped west in the 1700s and 1800s, at Goree Island off the coast of Dakar, Senegal July 7, 2019.   REUTERS/Zohra Bensemra


Bold bright colours and composition, and spot on timing, make Siphiwe Sibeko’s picture a great eye-catcher. One of its strengths is that it can be used very small on the page and it will still work. The words, even though a letter is obscured, still makes sense, the mind’s eye adding the ‘a’ in about. If the figure was a little to the right or the left the words will be broken up and will lose context. 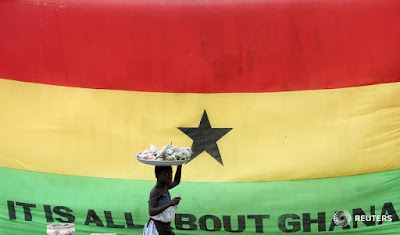 A girl walks past a flag of Ghana outside the Cape Coast castle in Ghana, July 28, 2019.  Cape Coast Castle was used as a slaving post from where slaves were bought and sold and then shipped off to the U.S. and other countries.  REUTERS/Siphiwe Sibeko


There is no getting away from it, but in terms of beauty Mohamed Nureldin Abdallah’s pictute has no redeeming features. But this image is not about beauty it’s about the stark brutal reality that was gathered in the seconds allocated to take pictures and its harshness is gripping. A former leader, dressed in white, stands upright as he’s held in a black cage like an exhibit, with people sitting around waiting for court proceedings to start. The slightly awkward tilt, the hard light and the bright blue uniforms of the police tangle visually with the white, red and orange of the foreground, which all make fir uneasy viewing of an uncertain future. 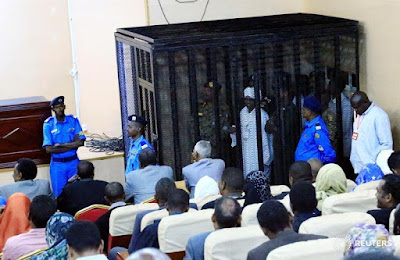 
Two days earlier Mohamed Nureldin Abdallah waited for the perfect shape as a train laden with celebrating people slowly approached him. Once you have finished enjoying the sweep of the national flags at the front of the train, you are led back, back and further back along the arc of the train’s carriages, all brimming with hundreds of people. A great feel-good picture. 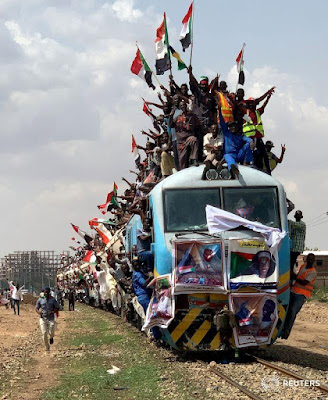 Sudanese civilians from other provinces ride on a train to join the celebrations of the signing of Sudan’s power sharing deal, that paves the way for a transitional government, and eventually elections following the overthrow of the long time leader Omar al-Bashir in Khartoum, Sudan August 17, 2019.   REUTERS/ Mohamed Nureldin Abdallah


A classic or a cliché? Either way there is no escaping the immediacy of Mohamed al-Sayaghi’s picture that consists almost entirely of eyes staring directly at you, the message on her head very bold. 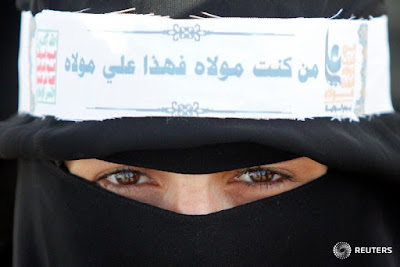 A follower of the Shi’ite Houthi group is seen with a headband as she celebrates Eid al-Ghadir, which marks a day Shi’ites believe Prophet Muhammad nominated his cousin, Imam Ali, to be his successor, in Sanaa, Yemen August 19, 2019,  REUTERS/ Mohamed al-Sayaghi
An emotional picture from Mohammed Salem as a mourner weeps and appears to stare into infinity as he is both comforted by and comforts a fellow mourner. The grey and blue colours give the image a cold feeling despite the warmth of the close hug. The figure drifting into the image from the left looks almost abstract as it appears like a shadow on the softly lit wall to the foreground moments before it will obscure the view of the mourners. 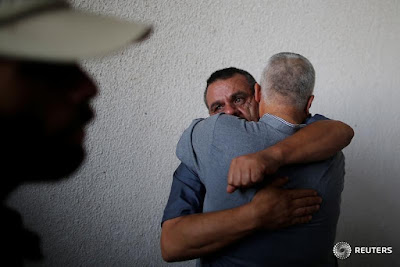 A relative of a Palestinian gunman who was killed by Israeli forces as he tried to cross the Gaza border, is hugged at a hospital in the northern Gaza strip August 18, 2019.   REUTERS/Mohammed Salem


Shooting pictures to match stories about the Egyptian economy, inflation, credit ratings, GDP etc is never easy but Hayam Adel’s picture caught my eye. It is simple and effective. It has every element needed to illustrate most aspects of the economy: a product, a transaction, money, a vendor and a consumer. The fact that Hayam has managed to get all these elements into one well-composed (I love that diagonal), well timed and softly lit image that is rich in colour makes it well worth drawing highlighting this week. Take the time to enjoy it. 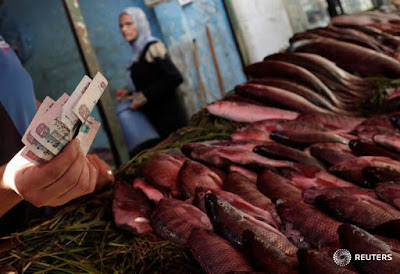 An Egyptian vendor holds his money at the fish market in Cairo, Egypt August 20, 2019.  REUTERS/Hayam Adel

I can’t help but be attracted to Ronen Zvulun’s picture from the world of cyber security. He got lucky in so much as the subject in the picture is hiding his identity with a red hoodie and the office space is daubed with terrific graffiti, mostly blue. To surround the figure in black by shooting through a doorway is a clever move that builds on the luck he was handed by the situation and gives us the sense that we are intruding, a perfect sense for a picture on cyber security. Read on here. 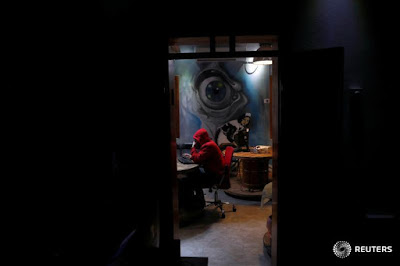 A man takes part in a training session at Cybergym, a cyber-warfare training facility backed by the Israel Electric Corporation, at their training centre in Hadera, Israel July 8, 2019.   REUTERS/Ronen Zvulun