It’s very hard to single out one image from this terrific story on how slaves travelled through Ghana by Siphiwe Sibeko and Francis Kokoroko that marks the 400th anniversary of the slave trade to the United States, so I won’t. Very clever composition by Siphiwe, who makes the focal point of his picture the waters of the river. This is achieved by exposing for the highlight bouncing off the river and squeezing the figures into the bottom right of the frame. It takes quite a while for your eyes to adjust to the bright light before you notice the solemn group standing in prayer in the waters. Read on here. 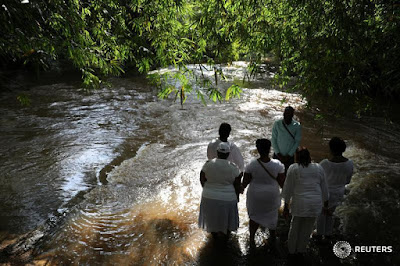 Tourists gather at the Assin Manso river, Ghana, July 23, 2019. Near their journey’s end in Ghana, the captives were given a last, ritual bath in the river before being sold. Today the Assin Manso site is a sacred place of remembrance.   REUTERS/Siphiwe Sibeko

Francis Kokoroko’s portrait is a powerful, proud image created by lighting the figure with a single light source so he appears to be emerging into the light from dark shadows. The light catches every detail of the proud lines on his face. Your eye is only momentarily distracted from his face by the red decorations on his hand and the richness of the cloth before returning to that wonderful face. 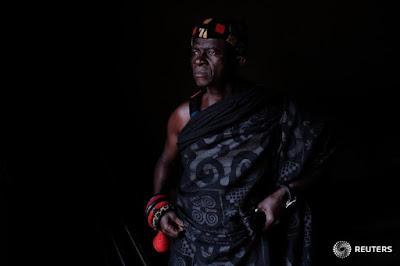 Nana Assenso, 68, chief of Adidwan, a village in Ghana’s interior, looks on before visiting the grave of his uncle, Kwame Badu, in Adidwan, Ashanti Region, Ghana. His uncle’s name Kwame Badu, has been passed down through the family in remembrance of his ancestor with that same name who was captured and sold into slavery.  REUTERS/Francis Kokoroko

A missile strike on a parade that killed more than 30 people created a devastating and horrific scene. Fawaz Salman, confronted by this horror, photographed everything. Many pictures were far too distressing to publish but this image, taken seconds after the blast, captures the chaos and violence. The dead and the injured litter the ground, and people choke on acrid smoke as others try to help. To show mutilated bodies and bleeding wounds would not give you any more information than you can gather from this image. Fawaz has shown enough of the horror of the attack without offending the reader with gratuitous and intrusive imagery of people’s suffering. This was hard to do if you imagine his ears were still ringing from the blast that could have easily killed him too.  Read on here. 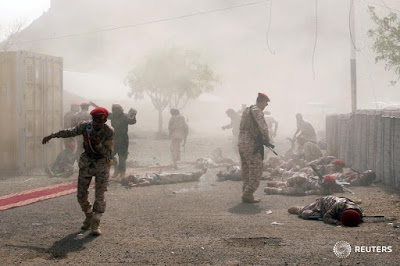 Soldiers lie on the ground after a missile attack on a military parade during a graduation ceremony for newly recruited troops in Aden, Yemen, August 1, 2019.   REUTERS/Fawaz Salman

What appears to be a peaceful domestic scene of a woman ironing while watching TV is not all it seems. Philimon Bulawayo’s thoughtful image illustrates the 18-hour power cuts that Zimbabwe is currently facing. The cold blue light of the TV and the single overhead lamp don’t look quite right in this warm domestic scene. On reading the caption you realise why. There is only power in the middle of the night. Read on here. 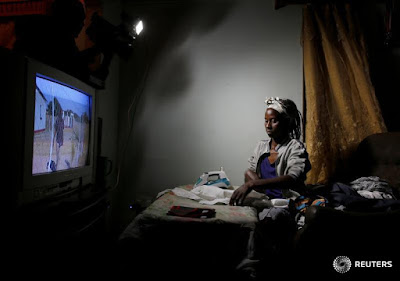 There is no escaping the strong shapes that create a rhythm that drums out a beat in Khalid al-Mousily’s picture. Lucky too for Khalid (one wonders how long he waited for that to happen?) that a boy is diving off the structure, frozen in a perfect wide reversed V, adding the extra detail needed to make this image work. 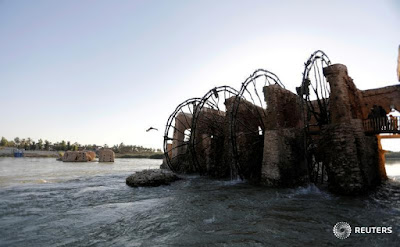 An Iraqi youth dives into the Euphrates river near Norias (water-wheels) or as called in Iraq ‘al-Nawaeer’ in Hit Iraq, July 23, 2019.   REUTERS/Khalid al-Mousily

This is just a fun, uplifting picture that makes me smile. Upturned faces and applauding hands lead you into the picture. Then the bobbing orange balloons take you up and then back down to the sea of smiling faces. If Njeri Mwangi had taken this image an instant later, cropping even the tiniest sliver off the top balloon, the moment would have been destroyed.

Workers at the DusitD2 Hotel celebrate during its reopening ceremony since its closure following an attack by Al Shabaab-affiliated militant group that killed at least 21 people in Nairobi Kenya, July 31, 2019.   REUTERS/Njeri Mwangi

Stunned migrants seem to stumble as they come ashore after being rescued from a boat that had overturned, killing dozens. It took me a while to understand why this image works so well. Then it hit me. Ismail Zitouny has used a low camera angle and a slight tilt to the horizon to create his effect. A sad and desperate scene that is out of step with the beauty of the blue skies and the clear warm seas. 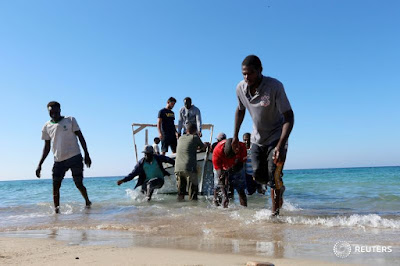 Migrants are seen after being rescued by the Libyan coast guard off the coast of Tripoli, Libya July 26, 2019.   REUTERS/Ismail Zitouny

This, in terms of composition, is a very noisy and messy picture. Your eye is grabbed by the green in the background and the letters LET’S REP on the black t-shirt in the foreground. Your mind is desperately trying to work out what it means. Half the word is missing, the woman in the middle distance is looking into the camera and there is a  truncated hand with bitten nails and old nail varnish on the left. It’s then the noise turns to silence and you see the woman saluting, her hand and face strong and still, held in silent respect. 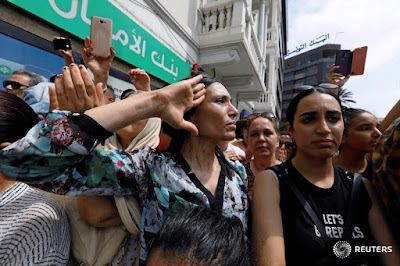