Afolabi Sotunde’s image of a traditional healer is far removed from preconceived notions of what such a scene would look like, but the light and colour in the frame are quite astounding. Once you read the caption you quickly look past the beauty of the light and colour and descend into the story. Read on here 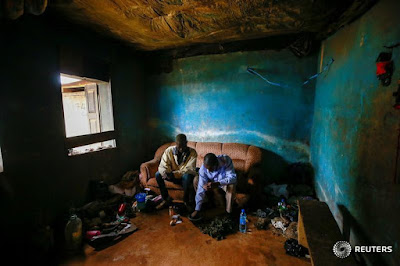 Agbetuyi Samuel, a traditional header with his friend, also a healer, prepare a traditional medicine that contains the head of a pangolin in his house in Akure, Nigeria, August 28, 2019.   REUTERS/Afolabi Sotunde


A sliver of catchlight highlights the profile of lips and nose of a riot police officer in this well-observed picture by Philimon Bulawayo. The face, although quite stern, still warms and softens the cool hard edges of the blue helmets and the grey uniforms. Cover the highlight with your finger and look again at the image: the feeling of menace trebles. 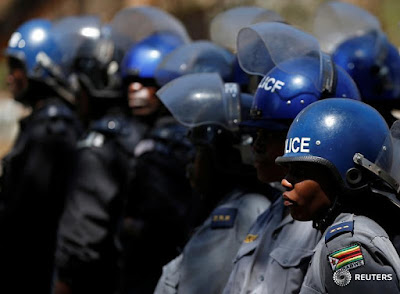 Riot police stand before striking healthcare workers protesting over the disappearance of Peter Magombeyi, the leader of their union outside a hospital in Harare, Zimbabwe, September 18, 2019.   REUTERS/Philimon Bulawayo

A complex combination of the symmetrical shapes of the doors and windows, with people moving in and out, gives the viewer a slightly uncomfortable feeling in Alphonso Toweh’s picture. You struggle to see what is going on in the distance as you peer through the entrances at the bright light and colours of the clothing. Only once out are drawn back into the blackened building do you notice the man looking at the scene where so many children died. 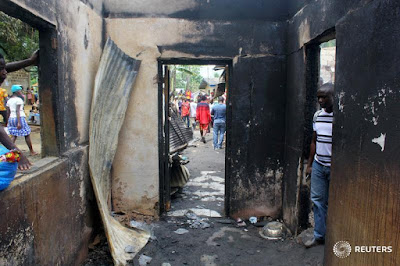 A man looks into the burned building after a fire swept through a school killing children in Monrovia, Liberia September 18, 2019.    REUTERS/Alphonso Toweh

The pressure is on when you know you are on the top global story, the attack on the Aramco oil field. Hamad Mohammed keep his cool told the story visually when on the face of it all you have to photograph is shapeless lumps of metal, the story was rocket fragments being displayed to the media by the Saudi military. A clever use of a silhouette of a camera being held in profile leads you to the unmistakable shape of fins of a rocket in the background. Of course, you need to the see the objects too and you can do so here. 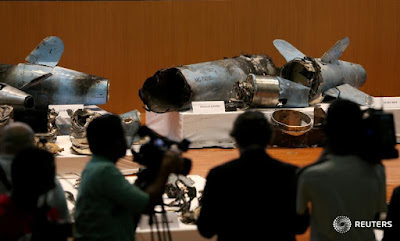 Remains of the missiles which the Saudi government says were used to attack an Aramco oil facility are displayed during a news conference in Riyadh, Saudi Arabia, September 18, 2019.   REUTERS/Hamad I Mohammad.

After Xenophobic attacks in both Nigeria and South Africa, people have fled home. Temilade Adelaja has captured exhausted children flopping all over mum and dad as they are carried through the airport. You can almost feel of the weight of these sleeping children. But what I love most about this picture is the tiny detail of the passport being held bottom left. 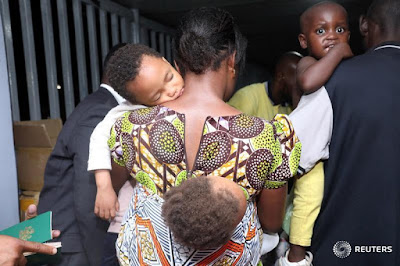 Nigerians, who were evacuated from South Africa after xenophobic attacks on foreign nationals, arrive at the airport in Lagos, Nigeria, September 18, 2019.    REUTERS/Temilade Adelaja

No doubt Corinna Kern could not believe her luck as Benny Gantz, the leader of the Blue and White party, lifted his had to gesture into blue and white light. The contrast between the warm tones on his face and the cold light on his hand is set against a perfectly black background. Maybe it was not luck, and Corinna spotted the light and just had to wait for the perfect shape to capture the right moment. 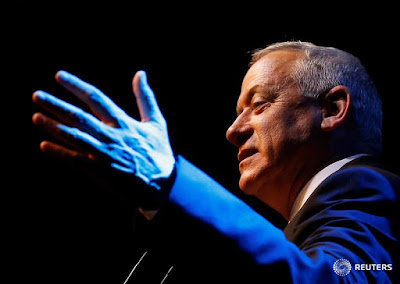 
A perfect moment of light and shape captured by Zoubeir Souissi is wonderfully pleasing to the eye, but why? I think it’s the tip of the finger’s shadow just a fraction away from the face. A moment before or after and the visual tension between the shapes would be lost. The temptation would be to crop to just the shadows and the hand, but then you would lose the right and downward pressure of the figure on the left that counters the upwards and left flow of the shadows. 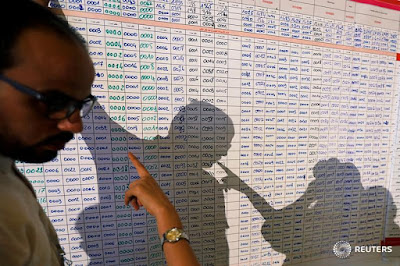 
A wonderful daily life picture by Mohammed Salem draws you in layer by layer using focus, compositional structure and a little tilt to offset and break up the vertical and horizontal lines of the walls and buildings. Each time you look you find more and more. The boy in the green shorts on the left, not so distracting as he is not in focus; the girl in the foreground looks through the gap in the fence to lead us to the perfectly timed skipping girl in midair. Finally, you notice the boy in the background on the left looking across at the play. And this is all set in the warm tones of rusting metal. 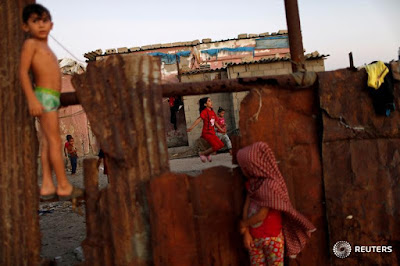 A Palestinian girl plays with a skipping rope outside her family house at Al-Shati refugee camp in Gaza City September 16, 2019.   REUTERS/Mohammed Salem


Thousands have marched globally in support of action on climate change, but it’s the simplicity of Afolabi Sotunde’s picture that caught my eye. The baking sun with an optical ring and a protest banner being lifted up towards it, the image grey and bleached of all colour, giving it a sense of foreboding. You can see the rest of the pictures here. 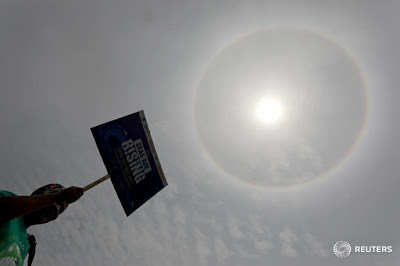 A protester raises a placard during a demonstration for climate protection in Abuja, Nigeria, September 20, 2019.   REUTERS/Afolabi Sotunde