I could not resist Alaa al-Marjani’s picture from Iraq. It’s full of colour and joy as arms reach up into the swirling coloured smoke that stretches to the back of the image. Compositionally, the picture has the figures well placed on the left, their upturned faces leading us to the abstract patterns in the smoke. 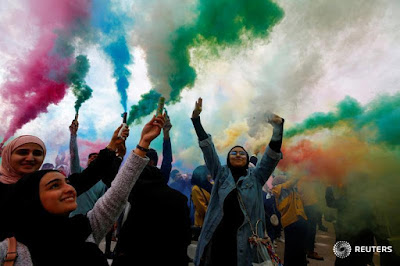 
A terrific image from Mohamed Azakir that really needs little explanation in terms of content, showing riot police responding with tear gas and baton charges against the demonstrators smashing banks in Beirut. What gives this image such strength is how you feel as you are led left to right across it, from the heat of the yellows and whites to the cool icy blues on the right. Your eye immediately picks out the silhouetted figure in full riot gear, back-lit by the hot glow of a neon light on the left. Next you are drawn towards the mass of riot police. The extended foot gives us the impression they are just starting their march towards the unseen demonstrators. Above them, the Bank of Beirut sign is the focus of the clashes. 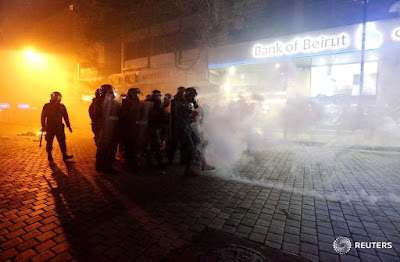 Riot police officers stand behind shields amid a cloud of tear gas during protests against the economic crisis outside a bank of Beirut office in Beirut, Lebanon, January 14, 2020.    REUTERS/Mohamed Azakir

It takes more than a little while to work out what is going on in Zohra Bensemra’s picture. You pick out some legs and feet against a mosaic pavement. The bright colours lead your eye to the hand across the folded arm and then you settle on the seated figure on the right. The image has a mixed air of calm, confusion and tension as you can’t quite make out who is who or what is going on. This is intentional as Zohra is hiding the identities of women who have been victims of rape, which was not a criminal offence in Senegal until the start of this year when the law was finally changed. Read on here. 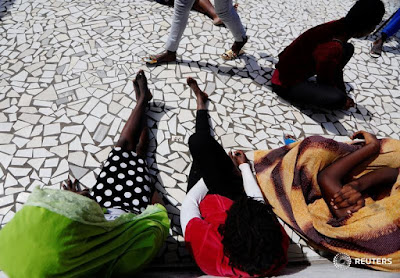 A youth, 17, who said she was raped by her friend, sits with other women at La Maison Rose, a shelter for women and girls who have fled abuse, rape, forced marriage and other trauma in Dakar, Senegal January 7, 2020.   REUTERS/Zohra Bensemra


Hamad Mohammed has waited to frame the car perfectly in the line of light and shadow in the sand. The harsh light has allowed him to expose for the highlights, so the shadows fall in compete black. The tyre tracks in the sand look like ripples in a pool. Wonderful. 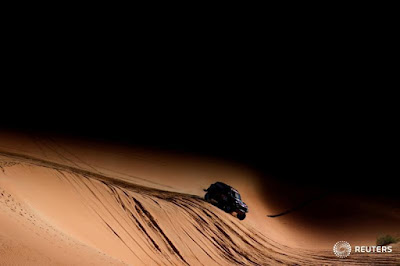 You can almost hear the buzzing of locusts in Njeri Mwangi’s picture as people try to keep the inspects off their grazing lands. The out of focus and fuzzy feel to the image is created by the millions of insects in the air. Spare a minute’s thought and imagine what it would be like trying to shoot pictures in the swam, trying to keep focus, hoping the subjects will run in front of a dark background so the insects stand out, and meanwhile fighting to keep the lens clean, so you can capture the moment. Let alone stopping the locusts from crawling into your clothing. 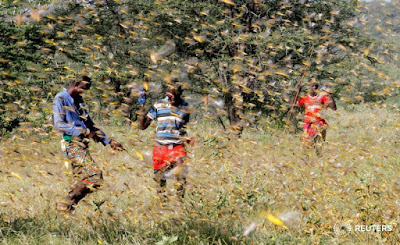 Crash! Siphiwe Sibeko captures the perfect moment as England’s Joe Root is clean bowled. The ball is still in the frame, the bails in mid-flight, the dust of the ball strike still in mid-air as the batsman flails about, beaten and out. And all this set against a clean background so we can see all the action, with no distractions. 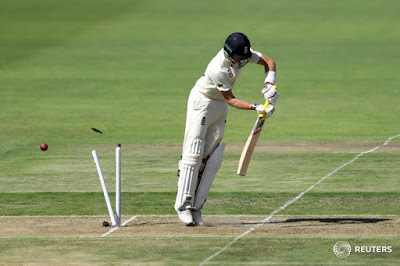 I love the symmetric feel to Khalil Ashawi’s picture. The children are almost in height order waiting to get on the bus, teacher book book in hand in the doorway. I can’t help feeling that the children seem to be waiting to escape their desperate world of conflict into a world of leaning and exploration. That sense is maybe created by the smiling images of children on the clean white bus. It could also be that a feeling of escape is also created by the metal container in the background , which looks like a space ship from a 1950's science fiction film. You can read on here. 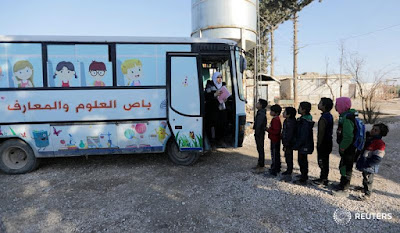 Students wait in line to attend class inside a bus in the city of al-Bab, Syria January 14, 2020.   REUTERS/Khalil Ashawi