A Week in Pictures Middle East and Africa October 20, 2017

The strong graphic image by Erik de Castro of an Islamic State jail cell is as dark as it is haunting. The light from the door is choked by the oppressive black of the walls, leaving me with a sense of no escape. The simplicity of the image, with the light thrown on the grey wall and floor picking out some unrecognisable objects, leaves me in no doubt about the almost unimaginable horrors that went on there. 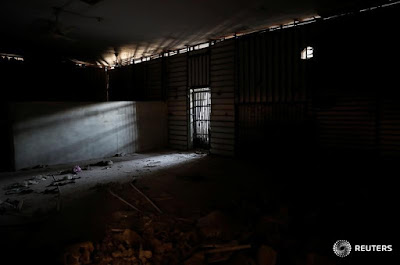 A view of a jail cell of the Islamic State is seen under the stadium, one of their last holdouts, in Raqqa, Syria, October 18, 2017.   REUTERS/Erik de Castro

In complete contrast to his previous image, Erik de Castro captures the elation and joy of victorious SDF forces driving through Raqqa, cheering, flashing victory signs and waving flags in the full light of day. It takes a while before the eye wanders to the background where you see the devastated buildings of the city. A bitter-sweet picture as you think about those buried in the ruins, the toll paid to secure the city from Islamic State. 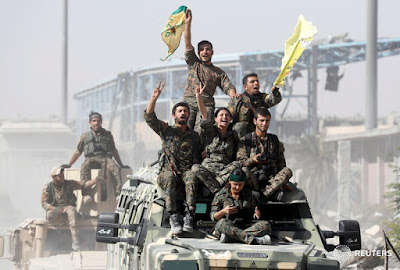 Without great shape, line and colour it’s hard for a picture to catch the eye. Alaa Al-Marjani’s picture of the contested oil fields in Kirkuk grabs your attention like snake grabbing its prey with its strong composition. The black and grey pipe that draws you into the distant fields looks like an arrow piercing the picture. The colours of the orange flames against the blue sky leading you to the single flare stack with its flame and smoke on the horizon. It is a picture I just could not ignore because of its simplicity its strength. 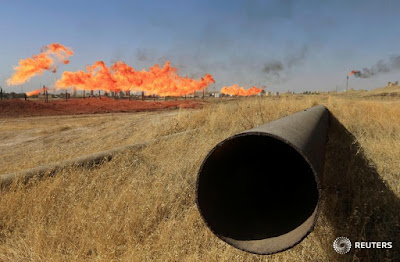 A line of migrants, some barefoot, stand in the sun after being rescued off the coast of Libya. Ismail Zitouny photographed their shadows to give us the feeling that these people are anonymous. Cropped below the chest and waist, they are faceless in both design and sense. But the sliver of light between each shadow reminds us that these are not a forgettable group but actually individuals – leaving me with a inexplicable hint of hope for their future. 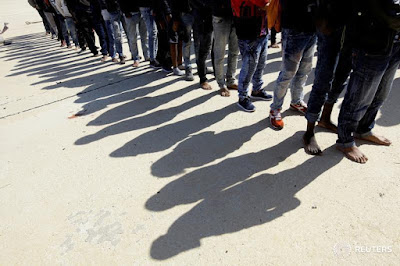 Migrants stand at a naval base after they were rescued by the Libyan coastguard in Tripoli, Libya October 18, 2017.    REUTERS/Ismail Zitouny

Baz Ratner’s image from Heroes’ Day celebrations in Kenya is a busy picture that takes a little time to make sense. You are finally guided to the centre of the frame by the men at the bottom left looking up. Time spent sorting out the visual noise is rewarded with a smile once your eyes settle on the two painted men taking selfies. 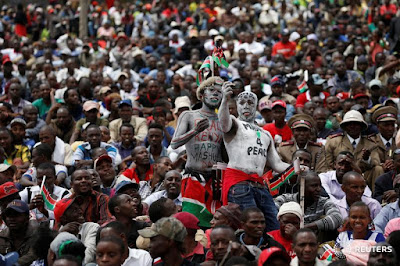