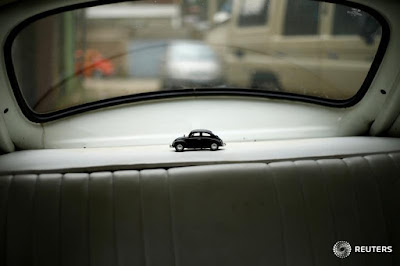 It’s not often that a press conference by an oil minister will result in a great picture but Khalid al-Mousily has achieved just that. A lucky break for Khalid makes for a riot of colour: the sea of coloured microphones, the reds of the background and the red, green, white and black of the Iraqi flag on the right. Amid all this colour there is no doubt in my mind that the world is listening to what Saudi Oil Minister Khalid al-Falih has to say. 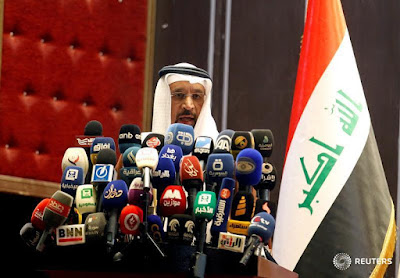 Flares, flags and fans all combine to make a great picture by Amr Abdullah Dalsh that puts me in mind of Visions of Hell by Hieronymus Bosch. The small human figures on the left seem to be competing for the ball of flame, while the giant mythical image of the bird brings the mind’s eye back to the fact that these are soccer fans cheering on their team with a passion,  and not Hell. 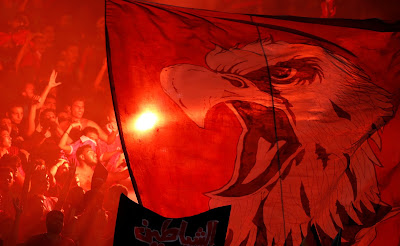 I just have to keep coming back to try to understand why I like Baz Ratner’s picture of protestor wearing a mask so much. Is it the bizarre tilt of the head in the expressionless mask, or the riot of clashing purples, blues and reds? Maybe it’s the strong graphic shapes made by the circle of the handbag, the string of pearls or the V of the purple jacket or even the eye to camera contact of the mask with no eyes. Not sure – what do you think? 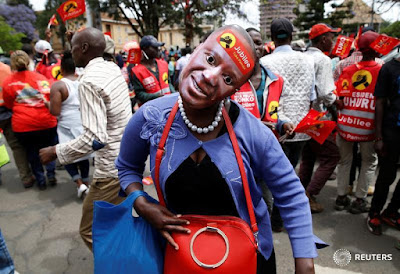 A supporter of Kenya’s president Uhuru Kenyatta wears a mask of his face before a Jubilee Party campaign caravan rally in Nairobi, Kenya, October 23, 2017.    REUTERS/Baz Ratner

Against a background like stars in the night sky, a fighter walks past a shop front riddled with bullet holes in this perfectly framed picture by Khalil Ashawi. The bright white light bleeding in around the armed figure in a darkened room removes just about all colour to create a monochrome, stage-like feel to this quiet but menacing picture. 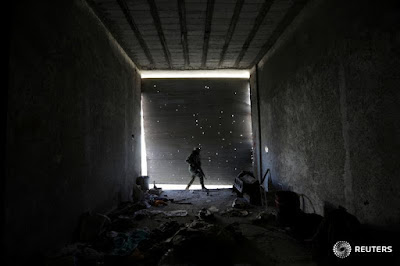 A Free Syrian Army fighter walks as he holds his weapon in a damaged shop in the town of Tadef,  Aleppo Province, Syria October 23, 2017.    REUTERS/Khalil Ashawi

It’s great to get some good news from Yemen and this rather haunting picture of 19-year-old Saidi by Abduljabber Zeyad is the third time we have photographed her in a year. Her story over the last year is as dark as the background in this picture, when Abduljabber photographed her earlier, looking skeletal and close to death. We have followed up on her story as she has slowly recovered, which you can see here. 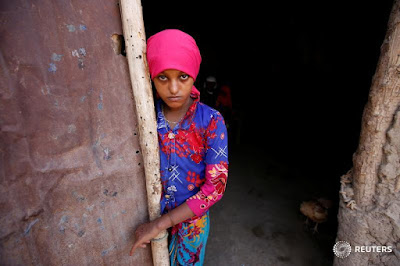 Saida Ahmad Baghili, 19, who is recovering from severe malnutrition, stands in the door of her family’s hut in al-Tuhaitad district of the Red Sea province of Hodeidah, Yemen October 20, 2017.    REUTERS/Abduljabber Zeyad

Also from Yemen and by Abduljabber is this striking image of girls attending school that has been damaged by shelling. I feel a little as if am watching life going on in a nature program, where a remote camera has been set up to give the viewer a closer look at the daily life of a shy and reclusive creature. As with nature programs ,the subjects, in this case girls, seem oblivious to the fact that we can see them and that a shell has torn a hole in their school. 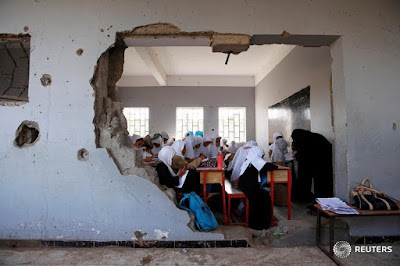 Girls attend a class at their school, damaged by a recent Saudi-led air strike in the Red Sea port of Hodeidah, Yemen October 24, 2017.   REUTERS/Abduljabber Zeyad

A stark and brutal image of little Hala al-Nufi, aged 2-1/2, photographed by Bassam Khabieh, is something you cannot take your eyes off.  Her face wrinkled as if she is 70 years old, her dry tears and contorted expression share her physical pain with the viewer. Should this picture be seen? In my opinion yes , but with sensitivity and balance. The whole story can be seen here. 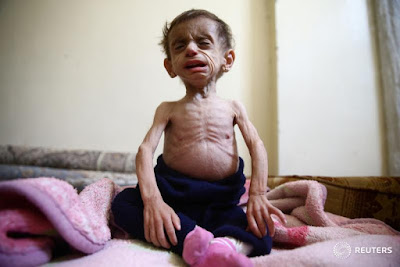 Two-and-a-half year old Hala al-Nufi, who suffers from a metabolic disorder which is worsening due t the siege and food shortages in eastern Ghouta, reacts as she sits on a bed in the Saqba area, in the eastern Damascus suburb of Ghouta, Syria, October 25, 2017.

On October 26, the Kenyan election was re-run amid fears that there would be a repetition of the blood-letting seen after the election in 2007. This still might happen as the process continues (let’s hope not). I could have chosen a number of pictures from the clashes: tear gas fired by police, those killed by gunfire, or stone hurling protesters. Instead I have chosen this quiet image by Thomas Mukoya. One of the places where voting could not take place was Kibera and for the process to be complete voting as to take place here. The soldier squeezing his large frame through the small gates of a primary school that was supposed to be used as a polling station seems to sum up the constitutional struggle that is taking place. You can see the whole file, from the voting to the fighting, here. 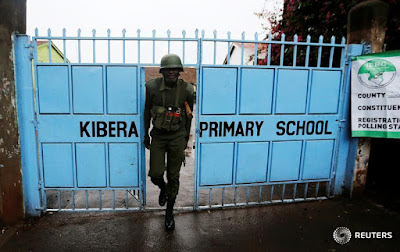 A policeman walks through the gate at the Kibera primary school during presidential election re-run in Nairobi Kenya, October 26, 2017.

Okay and change of heart here is a picture by Thomas Mukoya that has come in just now. The water caught and frozen in mid air as flames tear through the slum properties. 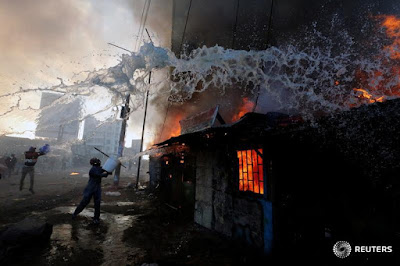