After a short break (I have been travelling in the region) here is my weekly selection of images from the region that have caught my eye. I chose them for a variety of reasons - a captured moment, something that made me pause for thought, great design, great light or even something that simply made me smile.  These are not necessarily the top news pictures of the week but may have slipped by largely unnoticed in the tsunami of news from the region.

A quiet and timeless moment from Erbil in Iraq as Kurds vote in a referendum on independence. The muted colours of the men’s traditional dress give the feeling of a bygone age, the soft, long shadows leading you into the picture. Ahmed Jadallah caught the moment perfectly as the shadow of the man’s profile is cast exactly to where the other man is looking, trying to find a name on the voters’ list.  More pictures of the referendum here. 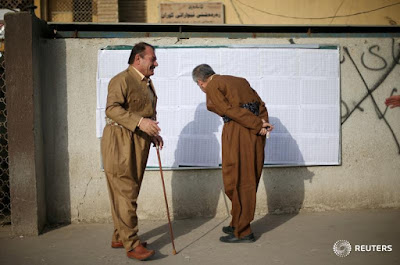 People look at their names on a list at a polling station during the Kurdish independence referendum in Erbil, Iraq September 25, 2017.   REUTERS/Ahmed Jadallah

I found it hard to choose which picture from Dubai I like the most so I have decided to leave that to you. I am very drawn to the abstract feel of Satish Kumar’s first picture. The dark bands in the foreground seem to float up like blurry space saucers, bringing with them a ghostly train of white that leads the eye to the strange flying object. We are not given any sense of scale. Confused, we finally ask: “Is this a space-age toy?” 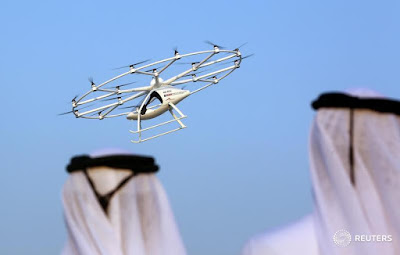 Men look up into the sky at the flying taxi in Dubai, United Arab Emirates September 25, 2017.   REUTERS/Satish Kumar.

The second of Satish’s images is less abstract, but has a wonderful futuristic sense to it. The cool tones and white and blue colours feel clinical, warmed only by the light on the face of the man on the left. The viewer tries to look past the men to understand the strong graphic shape of the object behind them that spins you around and around, a space-age mixture of drone and helicopter. 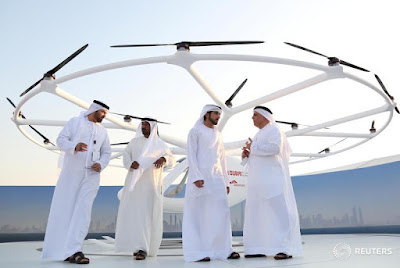 Bullet holes and shattered glass create a mosaic over Ammar Awad’s aftermath picture of an attack that left four dead. A slight tilt to the image ensures we know we are looking through a window. Its strong black vertical lines, for me, hint at death as the soldiers walk slowly past. 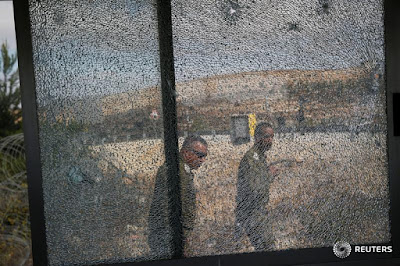 Israeli soldiers are seen through the window of a security booth damaged during a shooting attack in which a Palestinian gunman killed three Israeli guards and wounded a fourth in a Jewish settlement in the occupied West bank before he was shot dead police said, September 26, 2017.         REUTERS/Ammar Awad

I am never really a fan of military training exercises as we get so much actual conflict in the Middle East and Africa. But Suhaib’s picture of Hamas police caught my eye. A great action-packed picture, well composed in shape, tone and colour. The sheer determination on the man’s face perfectly captured as he lugs a concrete block while crawling, which I imagine is not easy. As the fires and black smoke in the background blot out the final glimmers of blue sky, the anonymous group of figures give additional menace to the picture and ultimately, to me, a film poster feel. This brings me back to my initial point and maybe this is why I personally don’t really like training pictures. Of course many others do and this is a very strong image. 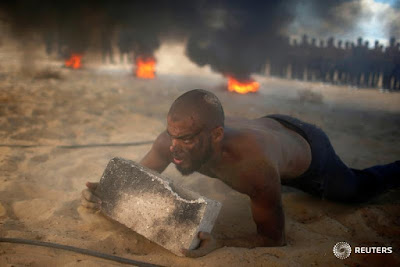 What catches my eye more often than not is a picture that confuses me visually.  I just have to look again and again to sort it out in my mind. Ronen Zvulun does this successfully with his ‘headless’ man holding a chicken. My experience in the news business tells me that surely it should be a headless chicken, in the same vein as ‘man bites dog’. The picture looks like the man has entered a fairground hall of mirrors that distorts reflections. The feet and legs look normal, the hand seems overly large, leading the viewpoint to the chicken that is trying, in vain, to escape his clutches. As you look further into the picture you get a shock, where is the man’s head? The reds, yellows and greens in the background throw in splashes of colour to give the picture a festival warm and affectionate feel-good factor. 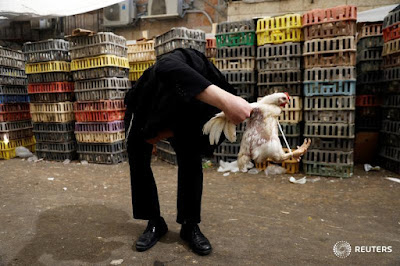 An Ultra-Orthodox Jewish man holds a chicken as he performs the Kaparot ritual, where white chickens are slaughtered as a symbolic gesture of atonement, ahead of Yom Kippur, the Jewish day of Atonement, in Jerusalem's Mea Shearim neighbourhood September 27, 2017.   REUTERS/Ronen Zvulun

The Ugandan parliament is debating a motion to end a constitutional limit on the President’s age.  James Akena had an overview as the debate turned into a brawl between security staff and lawmakers. A great compositional oval of green surrounds the reds and whites, drawing you in towards the face of the woman in the struggle as others join the fray. Five people were hospitalised and one quote from the hospital nearly as good as the picture: “These guys grabbed me from behind and one twisted my arm. I started to scream and another squeezed my balls.”  To see the full sequence of the punch-up click here. 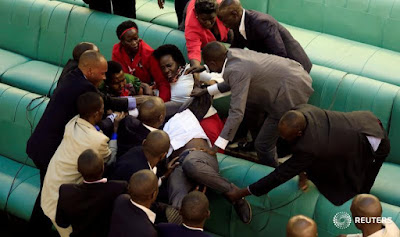 Ugandan opposition lawmakers fight with plain-clothed security personnel in the parliament while protesting a proposed age limit amendment bill debate to change the constitution for the extension of the President's rule, in Kampala, Uganda, September 27, 2017.  REUTERS/James Akena

Eye contact with the photographer can often destroy the moment in a picture. In Thomas Mukoya’s picture of a student being arrested it only adds to it. The policeman has grabbed student, who is shielding himself as the baton appears to swing towards him. I think this captured moment of ‘eye to lens’ contact gives the reader a glimpse into the policeman’s mind.  What is his intent? 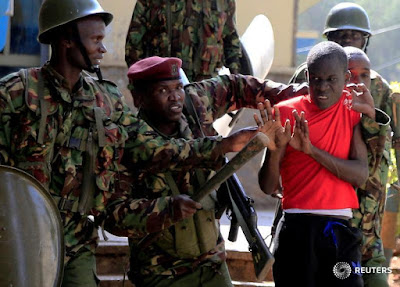 Riot policemen arrest a University of Nairobi student after protests against the detention of an opposition legislator in Nairobi, Kenya September 28, 2017.   REUTERS/Thomas Mukoya

A symmetrical composition of leading lines of the red lights and the fanned shape of the instruments held by the pilgrims in addition to the strong complimentary colours (the red and the green) build to this striking picture by Abdullah Dhiaa Al-Deen. The boy doesn't so much as look at the camera but over and through it to a distant point on the horizon. Beauty and order before the blood letting of Ashura begins. 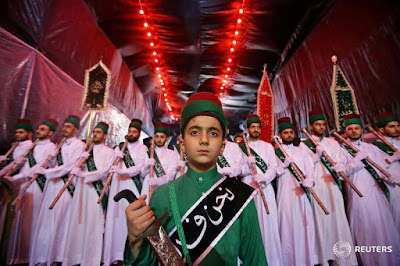