A Week in Pictures Middle East and Africa February 22, 2019

It’s good when one of the best pictures of the week matches one of the top global news stories. Rodi Said’s picture shows a fighter handing bread to children during the battle for Baghouz. Compositionally, the picture is made up of strong diagonals, the arm of the fighter reaching up left to right, the reaching out for the food all set against the strong dark shadow of the truck. What really makes this image stand out is that its structure compels the viewer to look at each and every one of the faces, all with different expressions. The almost square format of the image goes unnoticed. You can see more from the story here 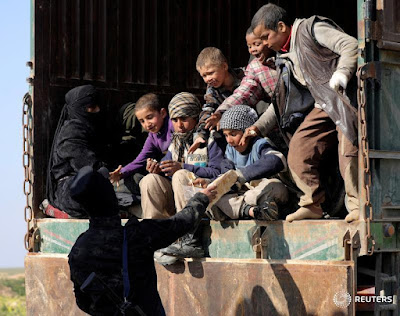 This is a powerful image as part of a story by Zohra Bensemra, the rest of which can be seen here The child looks so vulnerable, alone and isolated. The mood is created by the long shadow and maybe also because this image has been shot on a longish lens and slightly through obstructions, almost as if we are intruding on his loneliness. 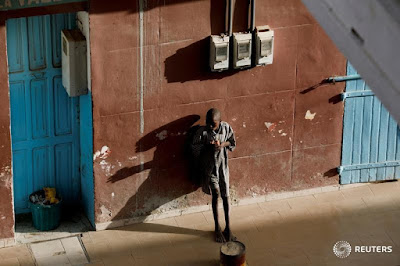 A Koran student, called a talibes, eats as he begs in front of a hotel in Saint-Louis, Senegal, February 9, 2019.    REUTERS/Zohra Bensemra

Classic thirds, a clean background and the strong contrast of shadows and highlights juxtaposed produce an immediate ‘look at me’ demand from Muhammad Hamed’s picture. When you look closer every figure occupies its own space, not an inch of crossover. What is most wonderful is the position of the feet and legs of the central figure, the moment of visual tension between foot and ground, drawing attention at the very edge of this open space to a small but important detail. 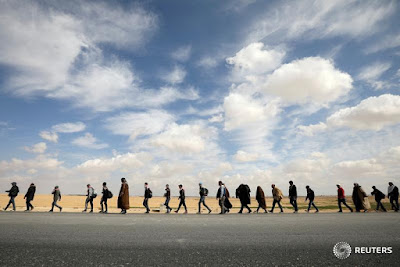 People walk along the highway near Amman, Jordan, during a march from the city of Aqaba, south of the capital, demanding more employment opportunities, February 20, 2019.   REUTERS/Muhammad Hamed

In essence, Amir Cohen’s picture is of a man walking away from a news conference through a small crowd. But what a wonderful moment of light, shapes and colour. There are basically two colours, the warm skin tones on the face and the cool blue of the room behind. The dark shadows of the surrounding figures crowd into Benny Gantz, the shadow from the bottom of the frame creeping up to chest height like dark waters, only to be pushed back down by the spotlight on the ceiling. The sidelight on his face is perfectly captured as there is a highlight in the eye that lifts it from the shadow. 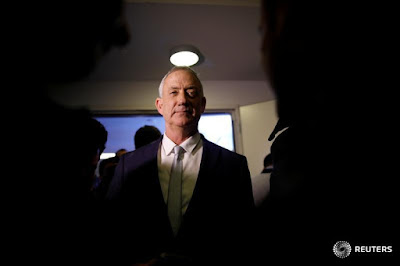 The story of Eskom’s rolling power shortages is South Africa not an easy one to illustrate, but Siphiwe Sibeko has managed to produce a gentle and well-timed image that does the job well. What is key is that the ball is in open space and not crossed by the cables. Maybe the trees on the bottom left were a little annoying, but if you remove them, the picture falls over to the left out of the frame. So best left alone. 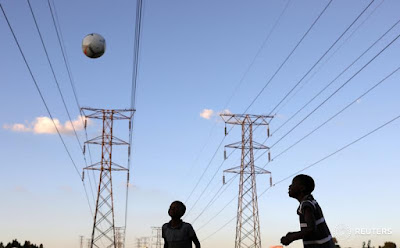 It’s not often you see images that are shot with direct flash, wallop! But Afoabi Sotunde has caught the sense of the moment in the men’s faces when they learn that Nigeria’s election has been postponed hours before polls where due to open. No background details distract from the stark realisation that something is amiss. 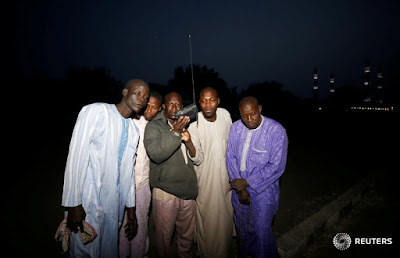 Men listen to the radio following the postponement of the Presidential election in Maiduguri, Nigeria February 16, 2019.   REUTERS/Afolabi Sotunde

The muted colours, soft light and gentle action of the woman pumping water in Luc Gnago’s picture give it a very strong sense of tranquillity. I am intrigued by the letters, numbers, words and pictures painted on the wall. All in all, a terrific image that stands alone by its sheer beauty. 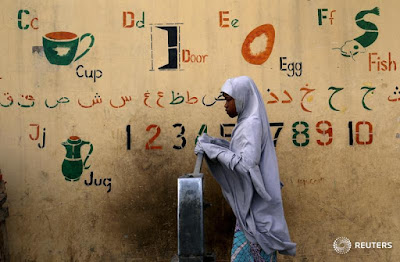 A girl draws water from a fountain a day after the postponement of the presidential election in kano, Nigeria February 17, 2019.    REUTERS/Luc Gnago

Hayam Adel’s picture verges on the surreal, like a scene from an Egyptian Alice in Wonderland or the wedding dress of Dickens’ Miss Havisham. The figures dotted about in the space lead us deep into the image past the visually addictive swirls of the wedding dresses. I would so love the girl in the foreground be a little to the left so we can see the feet of the girl in red but the world is not perfect. This picture was used as part of a story about population restriction measures being introduced by the government, which you can see here 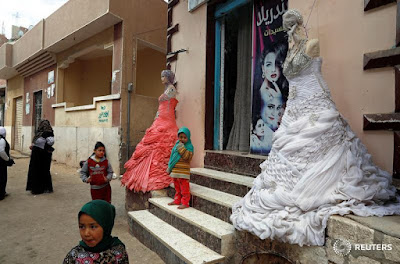 Egyptian girls play outside a shop for brides in the province of Fayoum, southwest of Cairo, Egypt February 19, 2019.   REUTERS/Hayam Adel