A Week in Pictures Middle East and Africa March 1, 2019

A last minute edition to this week's selection. Zohra Bensemra covered the clashes after Friday prayers in Algiers and produced a strong set of pictures moving from protesters viewpoint to that of the police. What I like most about this image is the simultaneous action of rock throwing by protesters and police seen through the haze of tear gas. The three protesters in the background are all captured at the different stages of rock throwing, pick up rock, aim, throw and run. 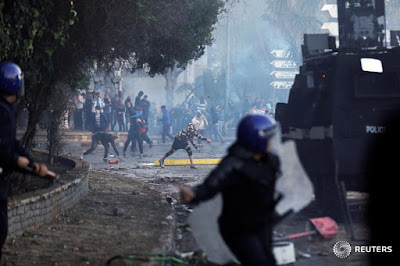 There is no getting away from the sense of urgency as people seem to struggle against overwhelming odds in Rodi Said’s picture. While the women try to escape the elements, the only glimmer of hope is the sun trying to break through the clouds, a scene played out against a backdrop that stretches to an infinity of emptiness. See the latest here 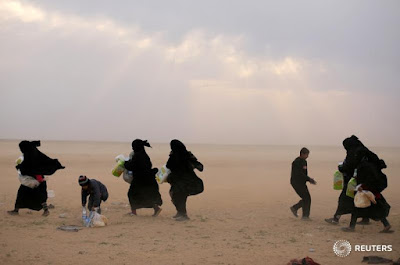 Sumaya Hisham is making a small visual joke in her picture. At first glance we think it’s South African leader Cyril Ramaphosa smiling at us as he emerges from a corrugated iron shack. We soon realise that it’s someone holding a poster.  Nice to see a little gentle but sophisticated fun in the election campaign. 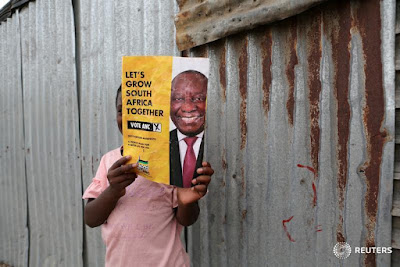 And while in a cheery mood, I can’t help adding a second picture from Sumaya from the same event. The colours, the warmth and the hand in on the left just jump out at me. This picture is so messy, with so many clashing colours, abstract and confusing shapes that it just should not work. But it does 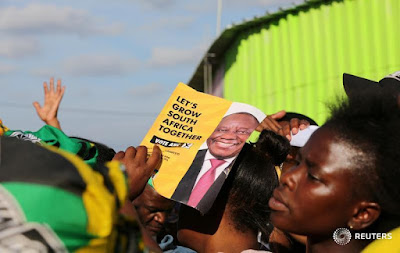 Senegal is also holding presidential elections and there was no lack of pictures that ooze colour and shape. It was not an easy choice, but Zohra Bensemra’s image has it all. So many bright colours vie for attention but the narrow depth of field draws your eye to the face in the foreground that is haloed in yellow cloth. You have to work hard to see the face, eyes down and with a gentle smile, but at the same time the viewer is being drawn back to the colours in the queue. 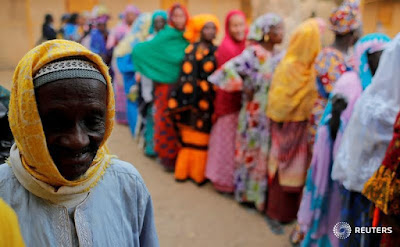 People wait to cast their vote at a polling station in Fatick, Senegal, during the presidential election February 24, 2018.  REUTERS/Zohra Bensemra

A dramatic image from Feisal Omar, in which rescue workers carry an injured man from a burning building after a bomb attack. Feisal has achieved a balance in scale so the viewer can see the action of the injured being carried while at the same time keeping the context of the wider scene in the background. This was all shot at night, while the attack was going on, which is not easy to achieve at all. See the full story here 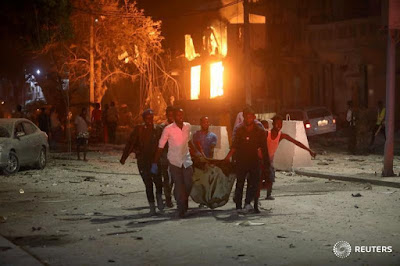 Rescue workers evacuate an injured man from the scene where a suicide car bomb exploded targeting a hotel in a business centre at Maka Al Mukaram street in Mogadishu, Somalia, February 28, 2019.   REUTERS/Fesial Omar

It’s a little unclear why the police officer is pointing at the ballot paper with his baton in Afolabi Sotunde’s picture. Is he giving advice? Is he pointing out where to vote? Is he indicating where a voter had put their mark? What makes this image really work is the eyes of the man on the left and the compositional “W” shape and line that take us through the officer’ back, his arm and baton to the cast vote. This is all set against the cool colour of the duck egg background. 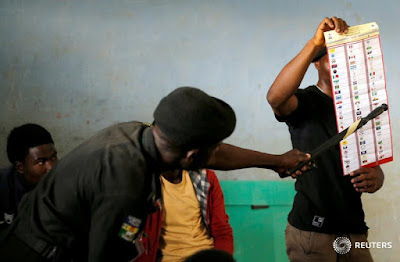 A police officer points his baton at a ballot paper during their sorting at Giginyu Primary school in Kano, Nigeria February 23, 2019.    REUTERS/Afolabi Sotunde

Two images from Gaza scream from opposite ends of the emotional spectrum. The first by Suhaib Salem shows a young girl crying at the funeral of one of her relatives killed during clashes. The girl holds a figure on the left who is just out of frame, a consoling hand from a woman with a stoic look on her face reaches out to touch her, but just falls short of the touch. Maybe the girl is inconsolable? 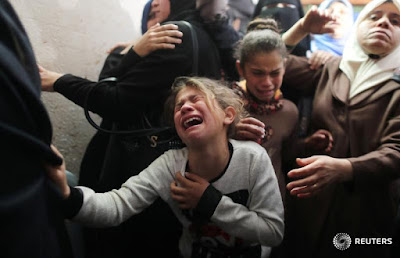 A relative of Palestinian teenager Yousif al-Davyah, 15, who was killed at the Israel-Gaza border fence during a protest on Friday, mourns during his funeral in Gaza City February 23, 2019.   REUTERS/Suhaib Salem

The second image, by Ibraheem Abu Mustafa, shows sheer joy and relief on the woman’s face as she hugs her relative, knowing that he is alive, well and back at home. Her eyes are closed tight as she crushes him in a tight hug, her face pressed against his, feeling his closeness and breathing in his presence. The face on the right and the crowd on the left squeeze us into the image so we too feel the closeness of this moment. 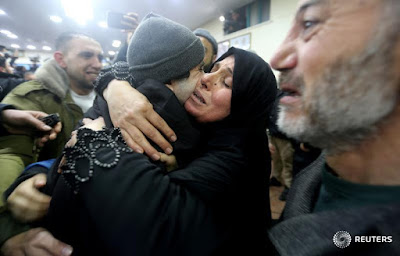 A relative hugs a Palestinian Hamas member who went missing in Egypt with others a few years ago, after his arrival in Gaza City February 28, 2019.   REUTERS/Ibraheem Abu Mustafa

Khaled Abdullah’s picture is a simple and striking half-length portrait of a girl in Yemen. The dark windows in the mud hut seem to echo her piecing look from within her niqab, her hand directing you to her eyes. What is most striking is the overwhelming sense of poverty, but it’s hard to pinpoint why we get this feeling. Is it the rough surface on the house in the background, the dust on her niqab, or the sun-bleached and torn clothing? Probably the combination of all three, but the caption confirms her poverty. She is in a camp for the displaced. 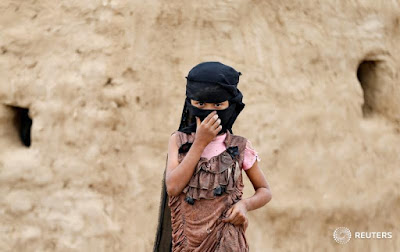 A girl stands near a hut in an improvised camp for internally displaced people near Abs of the northwestern province of Haija, Yemen, February 18, 2019.   REUTERS/Khaled Abdullah

Because I am interested in how we see pictures, I have added Thaier al-Sudani’s Friday prayers image. What do you see first? The shape and lines are quite regular but immediately you are drawn to the yellow shirt. Is it the combination of yellow and black, nature’s danger flag, think wasp or bee? Or is it that you can clearly see the word SPORTS? The mind’s eye always wants to read text and make sense of letters in pictures. Or did your eye jump to the complementary colours of red and green, bottom left? And how long does it take you to see the man in wheelchair as your eye darts around the image? Lastly, did you see the boy standing up, his hand to his mouth? 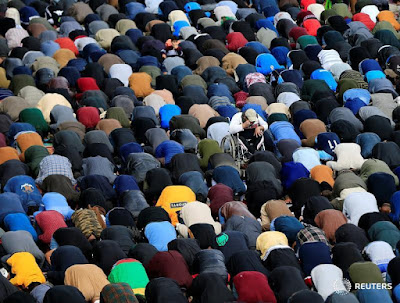