A week in Pictures Middle East and Africa February 1, 2019

After months of deliberation the Lebanese have formed a unity government. Not an easy assignment for Mohamed Azakir other than the standard headshot of a politician at a podium especially when outside the weather is a light drizzle. But unbeknown to Mohamed he’s not only made one but in my mind several nice pictures. On the original crop that moved to the wire I quite like the blue at the top of the frame, expecting it to be a political phrase; but it’s not, it’s the name of the company who created a hoarding, so my view is to crop it out. The orange bag is also a distraction so maybe nice to crop that out too leaving us with the graphic shape of the umbrella between the face and hand. But if you do that you loose the stride of the figure and the position of his feet, which are key to the original image, so maybe a vertical crop. Below are all possible crops, you chose. I think I prefer the third version with no blue banner and no legs. 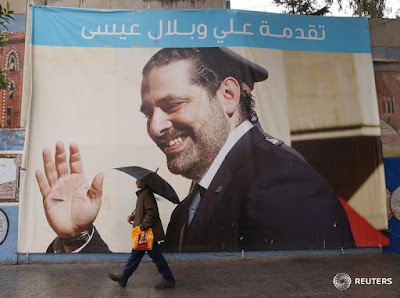 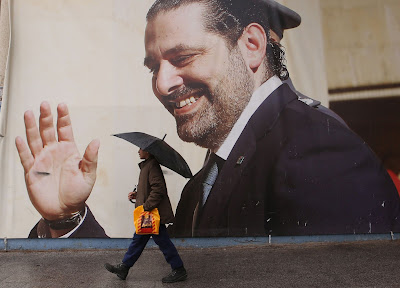 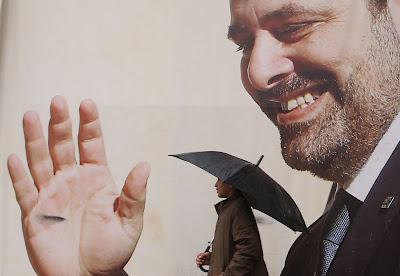 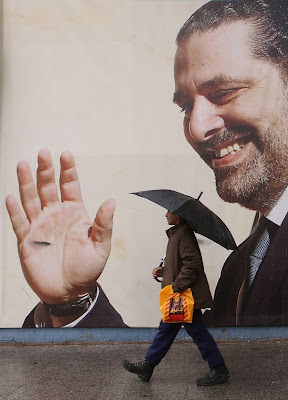 I actually like chaos and the opportunity it brings to make pictures and for things to happen. Afolabi Sotunde took full advantage of the chaotic scenes of protesters of opposing sides demonstrating in Abuja and an unlucky policeman trying to keep them apart. The hands and feet all jumping about give this image quite a friendly and almost celebratory feeling. But we all know that at any minute things can take a turn for the worse, so there is an underlying feeling of tension. 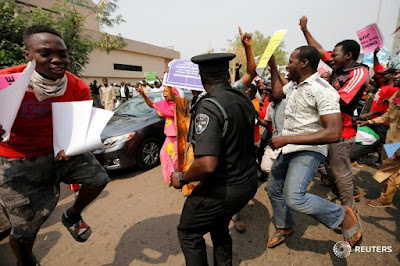 A Nigerian police officer tries to disperse protesters, both supporting and opposing the suspension of the Chief Justice of Nigeria Walter Onnoghen, in Abuja, Nigeria, January 28, 2018. REUTERS/Afolabi Sotunde

Some pictures are a ‘slow burn’ before they begin to grab your attention. Ahmed Jadallah’s image of worshippers in UAE is one such picture. A first glance a well-lit picture of people in shadow with minarets in the background, an easy up and down, left to right composition to draw your eye along the image. It’s then that you spot the Christian statue of the Virgin Mary in a shrine in the Muslim setting, which raises the question ‘what’s going on?’ The answer, it’s a preview to Pope Francis’ visit to the UAE. Photographing an event before it starts is never easy, so this gentle picture is a little special. 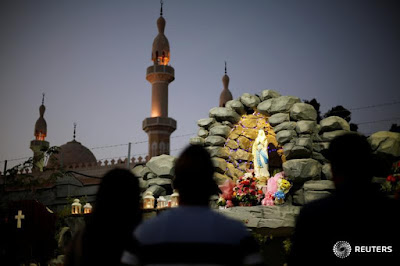 Expat worshippers prays in front of St Mary’s shrine at the St. Mary Catholic church in Oud Metha, as Catholics wait for the visit by pope Francis to the United Arab Emirates in Dubai, UAE, January 18, 2019.   REUTERS/Ahmed Jadallah

There’s always something a little comic and maybe a little yukky about feet sticking out of the end of the bed, especially when they belong to someone who is over 3000 years old. Mohamed Abd El Ghany didn’t waste a minute playing to our preconceived ideas when he took this wonderful picture, you just can’t stop looking. You can see more here. 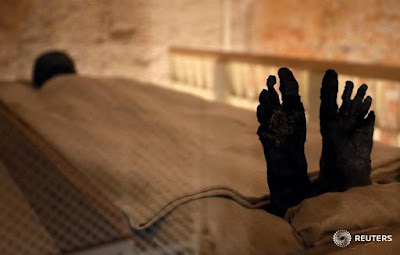 The mummy of the boy pharaoh King Tutankhamen is on display in his newly renovated tomb in the Valley of the Kings in Luxor, Egypt January 31, 2019.   REUTERS/ Mohamed Abd El Ghany

There is no mistaking the anguish on the boy’s face in Ibraheem Abu Mustafa’s picture as the child screams, blood streaming from his eye socket. You don’t need to be an optician to know that he is likely to blinded in that eye. If that imagery is not strong enough on its own, the juxtaposition of the man in the shirt that reads ‘Shit happens’ compounds the sense that for sure shit does happen and it’s often sad. Ibraheem followed up on the boy and his recovery, which offers no solace or happy ending and can be seen here 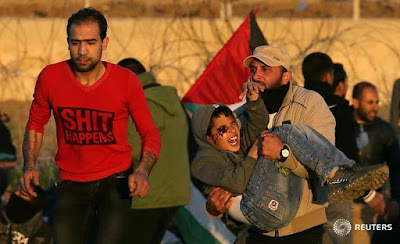 I like graphic shapes and lines in a picture, even better if there is vast areas of powerful strong tones or colour that leads your eye to the tiniest detail. Zohra Bensemra’s bridge picture ticks all those visual boxes. Your eye is rushed along the new black road surface by the solid white line, not stopping for a second as you zoom past the past the man to the tiny solitary car on the bridge on the distant horizon. Take a second more and you notice the wonderful detail of the smallest of highlights between road and vehicle. We are left breathless. 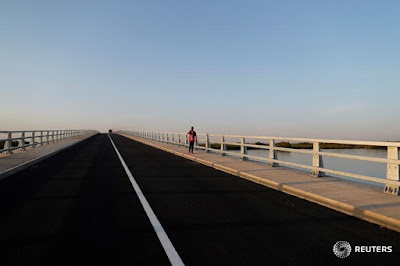 As an antidote to this breathtaking speed I have added the calm ripples of a gentle current that bends the lines of refection in a second image from Zohra from the same bridge. Now breathe out. 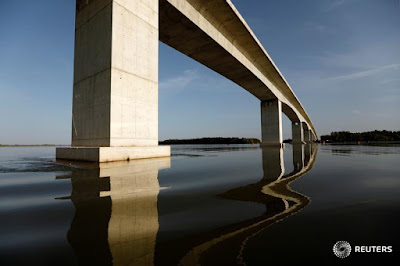 I can’t stop my eye from darting all over Afolabi Sotunde’s picture as the more I look the more I see. The warmth and richness of the colour vying for attention, circled and checkered cloth, faces half obscured with strong shadows from the harsh light or modest glances away from the camera; faded and peeling election posters on a metal corrugated hut, the bright reds of clothing in the mid ground on the left and a second queue of women on the right. And then, finally, to the symmetrical brown roofed building in the distance. I don’t think Afolabi could have crammed any more details into this picture if he tried. Read on here 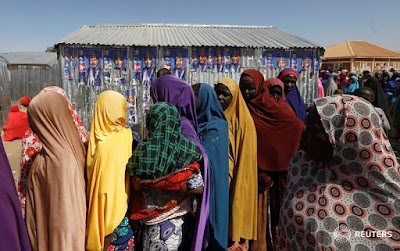 An easy link from Afolabi’s picture above to the complex visual composition of Khaled Abdullah’s picture from Yemen as vibrant colours and harsh light fight for your attention. It takes a little while before you notice the small boy, but once you do see him no matter how hard the colours and light fight for your attention you can’t pull yourself away from the look in this child’s eye. 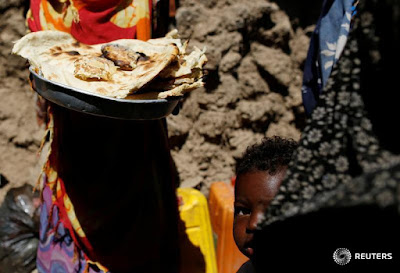 A boy looks as a woman holds bread she has just made outside her hut at a makeshift camp of internally displaced people near Sanaa, Yemen January 28, 2019.   REUTERS/Khaled Abdullah

There is a buzz to be heard on the Israeli political landscape as Benny Gantz throws his hat into the ring before the country’s elections. Faced with the challenge of finding an interesting picture to illustrate a good breaking story that is visually arid Amir Cohen has cleverly combined a billboard poster with a street sign. It’s both visually effective and confusing, so to help you fathom it out I’ve added a second picture (that plays with reds and blues) to explain how the first was shot. I feel a little guilty - as if I’m revealing a magician’s secret to their trick. 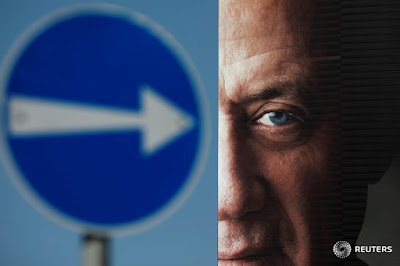 A part of a campaign billboard of Benny Gantz, a former Israel armed forces chief and the head of a new political party, Israel Resilience, can be seen in Tel Aviv, Israel January 29, 2019.   REUTERS/Amir Cohen 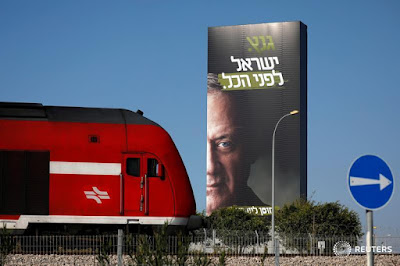 A campaign billboard of Benny Gantz, a former Israel armed forces chief and the head of a new political party, Israel Resilience, can be seen in Tel Aviv, Israel January 29, 2019.   REUTERS/Amir Cohen