Mohammed Salem’s affectionate picture of skaters poses the questions: What is shadow? What is painting? And what is silhouette? Your eye bounces around the images as if you are a skater yourself. The downward curves of the painted arcs of colour and the upward black line lead you to the inverted solid black figure. The shadows of the spectators leaning in from bottom right lead to the centre, where a Matisse-like series of cut outs layer on top of each other. Read on here 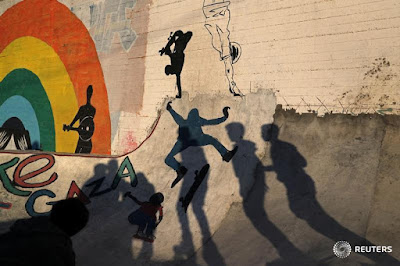 Members of the Gaza Skating Team cast shadows as they practice their rollerblading and skating skills at the seaport of Gaza City March 8, 2019.   REUTERS/Mohammed Salem

Hands that look almost as old as the wall itself wait to dig fingers deep into the cross in the wall in Raneen Sawafta’s wonderful detail picture of religious fervor. The colour and texture of the hands begin to merge into the warm tones and lines of the wall, a sense of melting that is stopped only by the dashes of red on the pink nails and the strong dark lines of wrinkles in the knuckle joints. 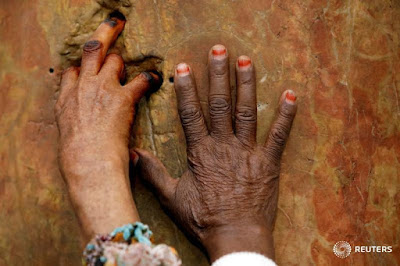 A worshipper places her fingers inside the holes in a column that form the shape of a cross before the arrival of the Holy Fire, at the Church of the Nativity in Bethlehem, in the Israeli-occupied West bank April 27, 2019.  REUTERS/Raneen Sawafta

There’s no mistaking the powerful draw of the fire in Corinna Kern’s image. Even today the impact is quite striking, so I can’t help imagining what life-changing effect this might have had on people who witnessed this scene in centuries past. The figures are dwarfed by the buildings glowing with the warm light of the fire. 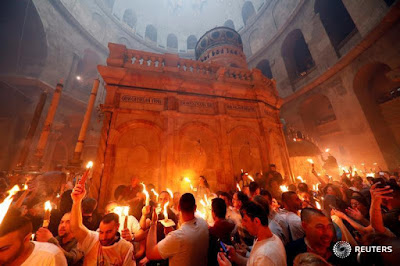 A cyclone has hit Mozambique for the second time in a month.  What I have come to realise is that to tell the story visually you have to show both show the enormity of the devastation and the impact it has on individuals. Mike Hutching’s picture does just that. A lone figure is striding through water, firewood gathered and carried on the head. In the background, destroyed crops that disappear into the distance lean to the right, countering the leftward motion of the figure, showing the storm’s powerful mark on the flooded landscape. Read on here 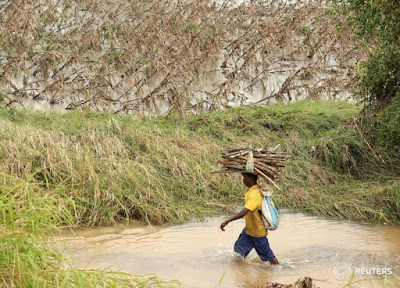 A villager carries wood through maize fields flooded in the aftermath of Cyclone Kenneth, along the Mieze river near Pemba Mozambique, April 30, 2019.   REUTERS/Mike Hutchings

There is an eerie calm around Umit Bektas’ picture. A small crowd gathers in front of what looks like a skeletal building, the focus of their attention a camel at rest, being cared for by the man in a yellow shirt, his hand resting affectionately on the animal’s back. Why is this happening? What are they expecting? Closer inspection shows that the camel’s legs are tied; the caption reveals it’s due for slaughter, the crowd waiting for meat. 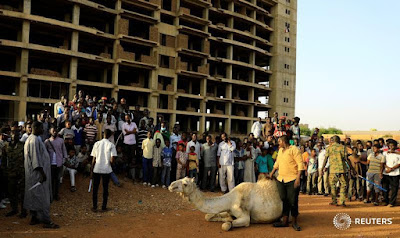 Sudanese protesters wait for a camel to be slaughtered to share its meat in-front of the defence ministry in Khartoum, Sudan, May 1, 2019.  REUTERS/Umit Bektas

A frenzied picture by Suhaib Salem of honey harvesting in Gaza. It’s been said that if your pictures are not good enough, get closer. Suhaib gets in as close as he can,  with a bee filling a large part of the frame top right and a swarm of bees filling the air as the workers try to calm them with smoke. This picture is, as they say, as busy as a bee. 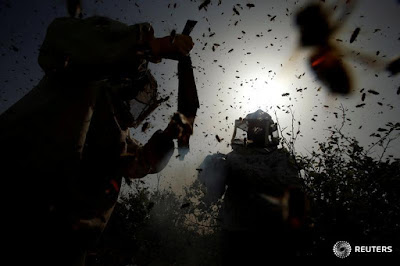 Sumaya Hisham has created a layered and surreal image that looks like a combination of a trompe l’oeil and a Windows background image. It’s an image that intrigues and makes you want to click to know more. What is happening? Why is the building unfinished? Why are there no people seen? Find out here 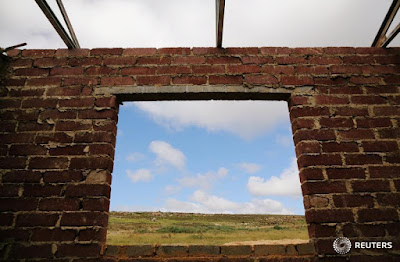 A view through the window of an incomplete house at Baken park housing project near Bethlehem, South Africa, April 16, 2019.   REUTERS/Sumaya Hisham