Two weeks to go before the Women’s World Cup France 2019 kicks off. Zohra Bensemra’s picture smacks you right in the face as the ball thunders at you, making you want to duck. Once you realise you are not going to be hit you notice that the ball looks like a giant head, the player’s body perfectly positioned so the illusion appears real. Once your mind’s eye has finished playing jokes with you, you can enjoy the warm tones of the image, the bright colours, and the fact that football is being enjoyed even though the pitch quality is not as good as it might be. But that just doesn’t matter. You can enjoy the rest of Zohra’s picture story here on the Wider Image. 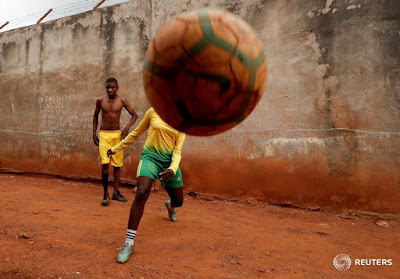 Gaelle Dule Asheri, 17, a soccer player, who is amongst the first wave of girls being trained by professional coaches at the rails Foot Academy, plays football with her friends outside her house in Yaounde, Cameroon, May 3, 2019.   REUTERS/Zohra Bensemra

Ibraheem Abu Mustafa’s picture caught my eye and I’ve thought mmm that’s nice and then moved on. I’ve then been drawn back to it again, but can’t quite put my finger on why. Maybe it’s the harsh warm light that gives the colours their richness, or the strong shadows that define the features of the man who looks you in the eye. Or maybe it’s just the strong zigzag composition that draws you through the fruit market, in and out of the shadows and highlights. 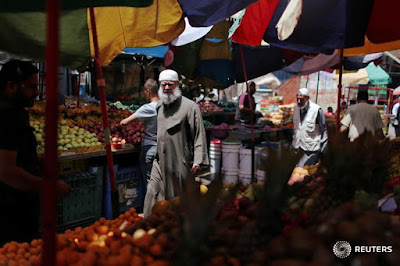 Palestinian shoppers walk in a market in Khan Younis refugee camp in the southern Gaza Strip may 21, 2019.  REUTERS/Ibraheem Abu Mustafa

At first glance, Khalil Ashawi’s picture is one of gentle tranquility; a child with a beautiful shock of blond hair highlighted by the rich blue in the foreground sleeps peacefully. This peace is then disturbed as you notice dozens of flies and mosquitoes around the child’s nose and mouth. The blue that initially added a cool calm colour turns out to be a ragged tent in a temporary refugee camp. Read on here. 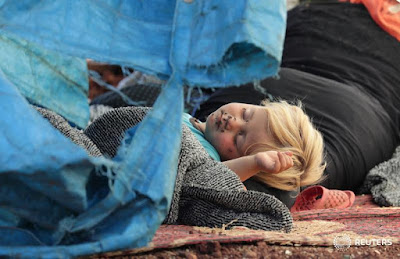 A displaced Syrian child sleeps on a mat laid out on the floor in an olive grove in the town of Atmeh, Idlib Province, Syria May 19, 2019.   REUTERS/Khalil Ashawi

Viewers of Mohamed Abd El Ghany’s wonderful picture would go completely unnoticed as people busily get on with the well-deserved business of breaking their fast. All hands, eyes and mouths are focused on eating and drinking. I can’t imagine much talking going on even though the whole community of friends, family and neighbours have all come together. That no doubt will come later when stomachs are full and thirsts quenched. 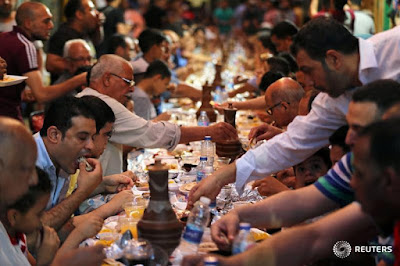 Residents of Ezbet Hamada in Cairo’s Mataria district gather to eat Iftar, the meal to end their fast at sunset, during the holy fasting month of Ramadan in Cairo Egypt, May 20, 2019.   REUTERS/Mohamed Abd El Ghany

I can’t help thinking of the painter Lowry when looking at Anne Mimault’s well- balanced and nicely timed picture. The figures occupy their own individual space against the backdrop of the flat walls of the church, which lead you into the picture, a visual movement aided by the angle of the bent arms on the left of the frame. Take the time to enjoy the shapes and space in the picture and then read on here about the horrors these people have faced. Read on here. 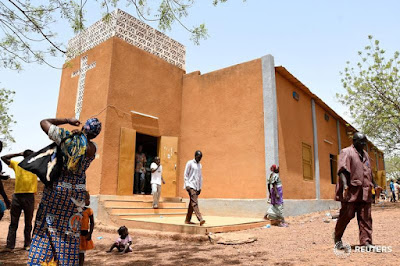 Protestants, some of whom fled Dablo and its surroundings leave a church after a service in the city of Kaya, Burkina Faso, May 16, 2019.    REUTERS/Anne Mimault


Bleached of nearly all colour, Sumaya Hisham’s strong political portrait looks like a still from a film noir. The empty space either side of the cameo profile is just begging for text to be laid out on the page. If I were to seek perfection, I’d like the lips not to be slightly clipped by a dark shape in the foreground. But the perfect often eludes us, so I am more than happy with this. Zohra Bensemra’s picture is a collection of well-composed triangles in a landscape that is hard to understand. Where and what is this place? Why are the colours so strange? What is this person doing? No pun intended, but the icing on the cake is the perfect position of the foot, poised in the classic step position. Read on here, all questions answered. 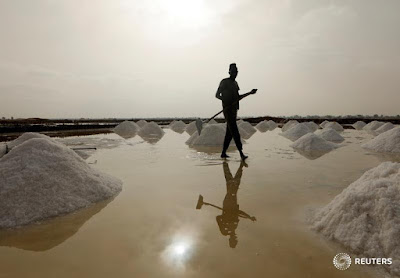 An employee who works for Marie Diouf, aka salt Queen, harvests salt at a production site in Ndiemou on the outskirts of Fatick, Senegal, May 15, 2019.   REUTERS/Zohra Bensemra

And a couple more pictures because I like them 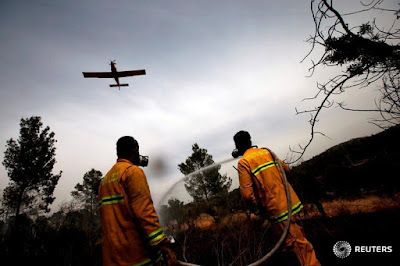 A firefighting aircraft flies over a forest as firefighters put out a fire near Kibbutz Harel, which was damaged by wildfires during a record heat wave in Israel May 24, 2019.   REUTERS/Ronen Zvulun 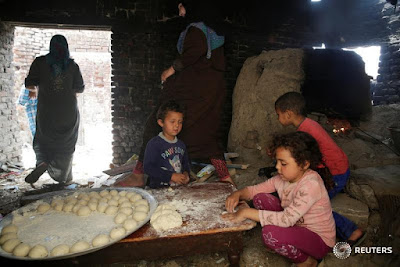 A family prepares bread at their house in Egypt’s Nile Delta village of El Shakhluba, in the province of Kaft el-Sheikh, Egypt may 5, 2019.   REUTERS/Hayam Adel