Saturday saw a missile and rocket exchange across Israel and the Palestinian territories, with hundreds of missiles fired day and night. Our teams on both sides of the conflict produced a powerful file. Two images from Mohammed Salem: the first captures a missile a fraction of a second from its target, making you hold your breath as you wait for the imminent strike and blast. Read the rest of the story here. 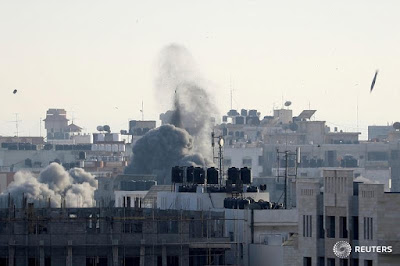 A missile approaches its target as smoke rises during Israeli air strikes in Gaza City May 5, 2019.  REUTERS/Mohammed Salem

The second image by Mohammed Salem, which also keeps you on edge, is of a man walking across a “bridge” of crushed concrete and metal, heavily weighed down as he salvages belongings from the destroyed building. Mohammed has timed his picture so the man is frozen at the weakest point of the traverse, the dark abyss of a drop seeming to reach up to pull him down. The broken metal bars and collapsed concrete stairs look like the jaws of a mechanical Venus fly trap. 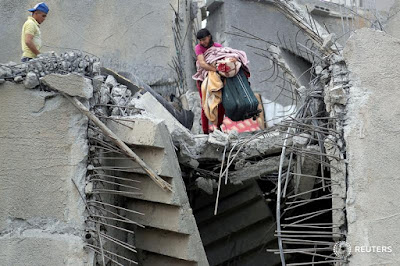 A Palestinian salvages his belongings from the rubble of his house that was destroyed by an Israeli air strike, Gaza City, May 7, 2019.   REUTERS/Mohammed Salem

Trails of smoke from anti-missile systems fill the blue sky and soft clouds to make an almost abstract picture, captured by Ronen Zvulun. I wondered, would it be better without the lamp post? Use your finger to hide the dark shape, the picture immediately loses the scale and context. Remove your finger so you can see the whole image again. The lines of the missile smoke now seem even more angry – don’t they? 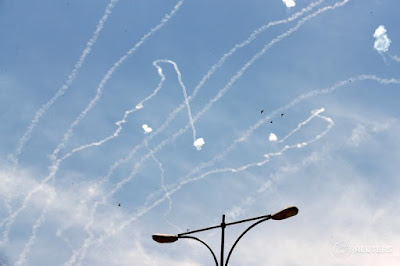 Smoke trails are seen in the sky as Iron Dome anti-missile projectiles intercepts a rocket that was fired from Gaza, above the southern Israeli city of Ashkelon May 5, 2019.   REUTERS/Ronen Zvulun

At first glance all you really see in Amir Cohen’s picture is a small green bush against a brown stone wall. You then notice the highlight of the man’s arms, crouched and covering his head, sheltering in much as the corner of the stone work as possible. The compositional line and diagonals of the wall then lead to you the figures peering out from their “corner”. The dark shape in the background presses you back into the image. You then understand these people are sheltering, frightened. The caption reveals air raid sirens are sounding and these people have been caught out in the open. They are hiding, Amir is taking pictures. 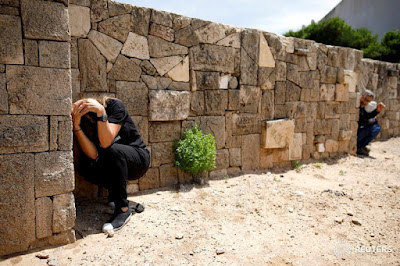 Israelis take cover as a siren sounds warning of incoming rockets from Gaza, during cross border hostilities, in the southern Israeli city of Ashkelon may 5, 2019.   REUTERS/Amir Cohen

Despite the vivid colours in the foreground and the matching T-shirts and posters there is a gentle calm surrounding Rogan Ward’s election picture in the soft morning light. Party activists are busy as they wait for voters in an empty landscape that stretches out to the far horizon. The question is, will anyone come? Read the story here 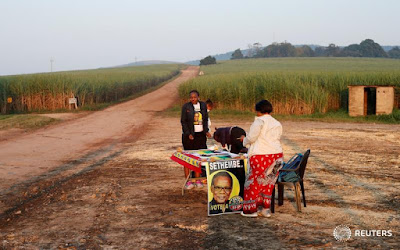 Inkatha Freedom Party agents are seen near a polling station ahead of South Africa’s parliamentary elections in the farm lands near Eshowe, South Africa May 8, 2019.   REUTERS/Rogan Ward

If you have read a few of my weekly posts you will know that I am a sucker for strong compositional patterns with obvious line and shape, but also not keen on silhouettes.  There is no getting away from the terrific fan shape created by the single central light casting shadows of the people waiting to vote.  Mike Hutchings has shot it wide enough for us to be zoomed into the picture at breakneck speed. It’s quite fun. 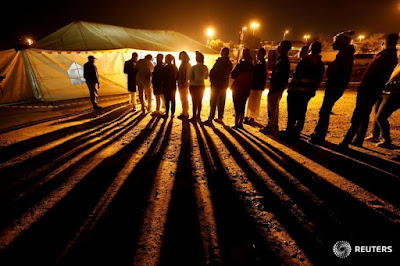 Voters queue to cast their ballots before polls close outside a polling station in Alexandria township in Johannesburg, South Africa, May 8, 2019.   REUTERS/Mike Hutchings

A slight tilt to Umit Bektas’ picture has created a wonderfully designed image that has a lyrical feel. You can almost hear the song and chanting as sticks are waved to the beat in the open space of the sky. If you don’t see and feel all that, then just enjoy the smiles. 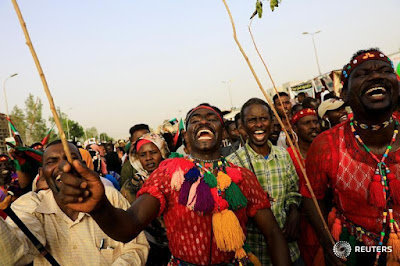 Sudanese protesters shout slogans during a demonstration infront of the Defence Ministry compound in Khartoum, Sudan May 4, 2019.   REUTERS/Umit Bektas

Siphiwe Sibeko’s portrait picture is as warm in its tones as it is affectionate towards his subjects. The orange of Nobutho’s clothing is echoed in the bowl in the foreground and the cushion to the left. Both these blocks of colour are cropped off perfectly so they don’t distract you as they lead you around the image to the seated figure in the shadows, her husband, Mandla. This visual draw is accentuated by the line of shadow from the cushion to Mandla. Once there, you read the slogan on the wall. Read the rest of the story here. 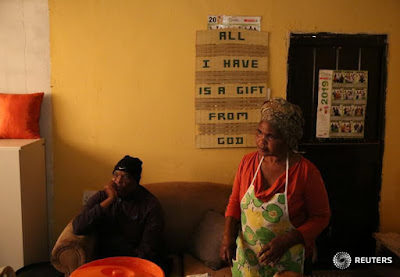 Nobutho Thethani, 59, a full-time farmer, looks on next to her husband, Mandla, 61, a pensioner, at their home in Lawley township in the south of Johannesburg, South Africa, April 17, 2019.    REUTERS/Siphiwe Sibeko

It’s now the Muslim holy month of Ramadan and in Yemen women are queuing up for charity iftar meals. Khaled Abdullah has chosen to shoot the long queue of women very wide to give the viewer to sense of scale of all those needing food as charity. What is really striking to me is the orderly nature of the queue as these people wait patiently. It has quite a sombre tone. 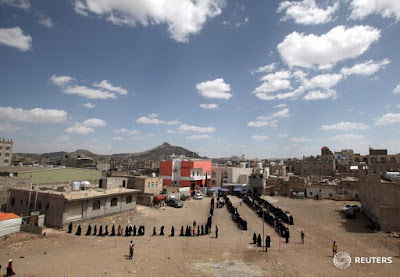 Yemeni women and girls queue outside a charity food distribution centre to get iftar meal during the holy month of Ramadan in Sanna, Yemen, May 8, 2019.   REUTERS/Khaled Abdullah