Middle East and Africa, Pictures of the Week August 6, 2017 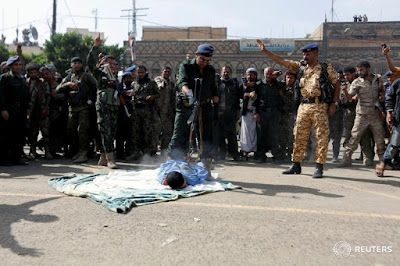 A police officer opens fire at Muhammad al-Maghrabi, 41, who was convicted or raping and murdering a three-year-old girl, in Sanaa, Yemen July 31, 2017.   REUTERS/Khaled Abdullah

We started the week with a debate about whether to show images from photographer Khaled Abdullah of an execution in Yemen. Was it legal in Yemen? Yes. Could we have intervened? No. Did it take place in a public place? Yes. Was it sensationalist? Not an easy question to answer. It clearly had news value and we believe the careful edit enabled us to show the event without sensationalising it. The moment of execution was photographed wide to show the whole scene, and the package of pictures included images of the child’s father, the gathered crowd of over 2,000 people and the prisoner being brought to his fate. Khaled described how he got access here. 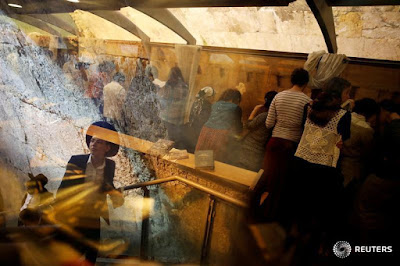 Ultra-Orthodox Jewish youth is reflected in a glass panel as female Jewish worshippers pray next to the Western Wall on Tisha B'Av, a day of fasting and lament, in Jerusalem's Old City August 1, 2017. REUTERS/Amir Cohen

The beautifully observed picture by Amir Cohen of a boy reflected in a glass panel as worshippers pray next to the Western Wall in Jerusalem caught my attention. Initially the viewer is confused – what’s going on? The reflections almost make it appear that men and women are mixing here, which is not allowed, the ghostly figure of the young man walking behind praying women. Amir needed to wait for quite a while before the different elements of the picture to came together to ensure the composition was right. The change from the cold colours on the left to the warm tones on the right adding to the strong composition and yes, maybe even a sense of confusion. 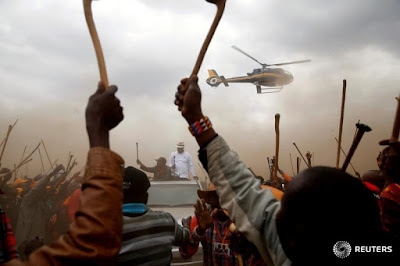 Kenyan opposition leader Raila Ordinga, the presidential candidate of the National Super Alliance (NASA) party, is surrounded by supporters from the Maasai community as he arrives on top of a car to an election rally in Suswa, Kenya, August 2, 2017.  REUTERS/Baz Ratner

Campaigning for the Kenyan election is in full swing. Baz Ratner’s picture of opposition leader Raila Odinga arriving at a rally of Maasai supporters is full of tension. The raised hands with sticks in the foreground draw the eye to the tiny figure of Odinga being driven through the crowd. The sticks and arms of the cheering crowd take you deeper into the image as they appear to rain down on the white-clad leader. You can almost taste the atmosphere as a helicopter arcs away in the background, throwing up dust. 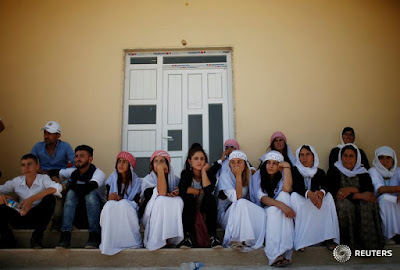 Yazidis attend a commemoration to mark three years since Islamic State launched what the United Nations said was a genocidal campaign against them, in Sinjar region, Iraq, August 3, 2017.    REUTERS/Suhaib Salem

It’s often images that happen on the sidelines of a planned event that make the strongest pictures. Suhaib Salem caught an unguarded moment among Yazidis gathered in Sinjar to mark the third anniversary of what the UN has called a genocidal campaign against them by IS. There is no doubting the sombre feeling; the soft tones and colour of the even light, the visual upward pressure of the women’s hands held to their mouths and the shapes in the door in the background. 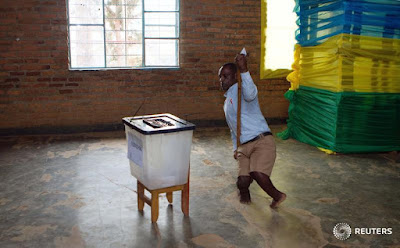 A man prepares to cast his vote at a polling station in Kigali, Rwanda, August 4, 2017.   REUTERS/Jean Biziman

Not many will know that Rwanda has just had elections, with Paul Kagame sweeping back into power with a massive majority to secure a third term. Jean Bizimana’s image capturing the determination on this voter’s face, his polling card in hand, fills this picture with “can do, will do” passion. The man’s eyes are fixed on the ballot box, the focal point of the picture, in the centre of an empty room. The coloured cloth draped carefully around a wooden structure in the background reflects the national flag and the nation’s ideology; blue, for happiness and peace, yellow, economic development, and green, hope of prosperity. 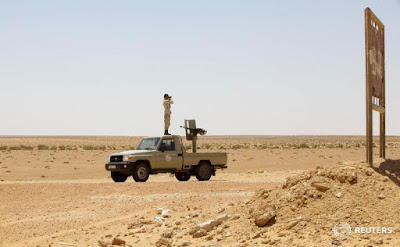 A member of Libyan forces allied with the UN-backed government looks through a pair of binoculars during a patrol to prevent Islamic State resurgence on the outskirts of Sirte, Libya, August 4, 2017.   REUTERS/Ismail Zitouny

Clever compositional use of strong verticals and horizontals by Ismail Zitouny tricks us into thinking that the solder is standing on the tight rope of the distant horizon. But of course that makes no sense, so instead we get to experience the soldier’s view, an overwhelming sense of infinity, where desert meets sky. Our sense of isolation is only broken by the weathered sign to the right of the picture, leaving us to wonder what possible information could be written here in the deserts of Libya. 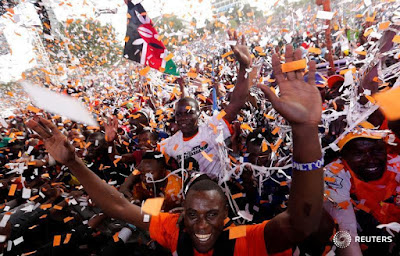 Sheer energy, a big smile and a slight tilt to the camera makes Thomas Mukoya’s picture one to catch the eye. Hundreds of people are seen cheering at the last opposition rally before polling day, their hands almost embracing the Kenyan national flag. It’s never easy to keep pictures sharp when tinsel and confetti are falling down as the auto focus goes into hyper-drive searching for one thing to focus on. There is no doubt where the focus is here, on that big smile. Read more on the election here. 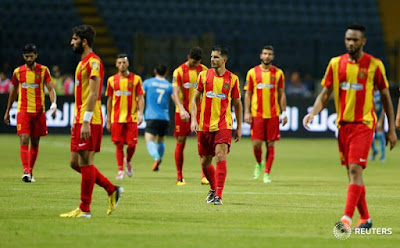 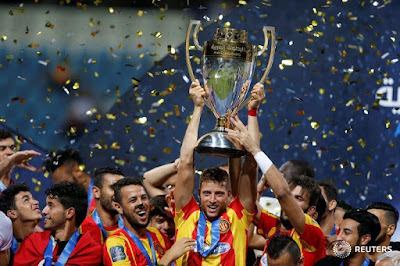 The final of the Arab Cup Championship in Egypt was a rollercoaster of emotion.  Esperance Sportive, who played Al Faisaly in a tense match that went into extra time, look almost choreographed in the first picture by Amr Abdallah Dalsh. The position of the players’ feet, the almost even spaces between the figures opening for a glimpse of Al Faisaly’s number 7 in the background, give the composition a dance-like feel, but the tension in their faces make the dance a grim affair. The second image is full of joy, celebration and relief as the trophy is lifted.