Middle East and Africa A Week in Pictures 20 August 2017


A quiet moment in a city under siege in Bassam Khabieh’s picture from Douma in Syria. The body language of the boy is as sad and somber as the grays of the wall behind him, the bricks on the ground left and right of the image keeping the rhythm of the composition that is built up by the position of the figures and the pillars in the wall. The only warm colour in the picture is the headdress of the man looking down at his grandson, the affection and warmth on his face slowly coming to the fore of the image. 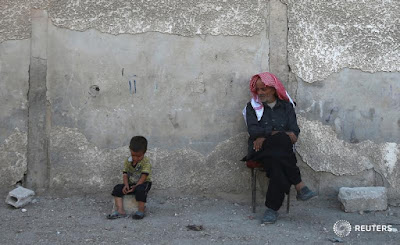 A child sits next to his grandfather in Douma, near Damascus, Syria, August 14, 2017.    REUTERS/Bassam Khabieh

The Egyptian Cup Final between Al Masry and Al Ahly in Alexandria, was a quiet affair, not that the sport was not competitive, the winner scored in extra time, but because no fans were allowed to attended due to violence at previous fixtures. You can almost hear the ref’s whistle pierce the near silence in Amr Dalsh’s eerie picture of the floodlit pitch surrounded by empty seats. 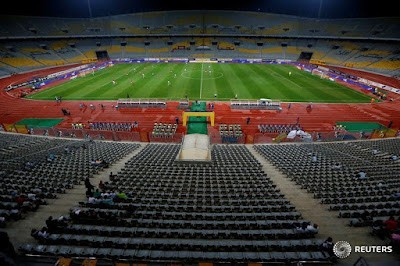 I am not a great fan of sunset pictures or silhouettes but Zohra Bensemra's perfectly timed picture of a boy diving into a canal caught my eye this week. The body of the boy appearing to make a horizontal bridge across the canal, his fingers seem to reach out to disturb the calm of the waters before the splash we all know is going to happen. What is most intriguing for me is that this peaceful captured moment is close to the city of Raqqa where a battle rages on. 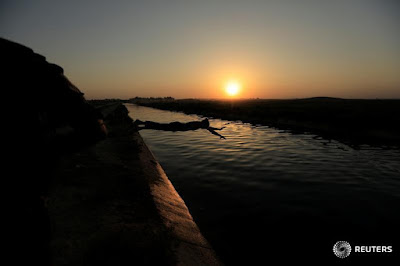 A boy cools off in an irrigation canal on the outskirts of Raqqa, Syria, August 16, 2017.    REUTERS/Zohra Bensemra

With reports of hundreds being buried in a landslide in Sierra Leone Nigeria based photographer Afolabi Sotunde was at the scene within 24 hours. Rescue workers looking for survivors and recovering bodies. Afolabi's picture of fresh graves being dig for the victims stretch from the foreground of the picture to the horizon giving the viewer a real sense of the large numbers involved in this tragedy. The longer you look at the picture the more graves you see with grim faced workers going about their solemn business, a sad and poignant picture. 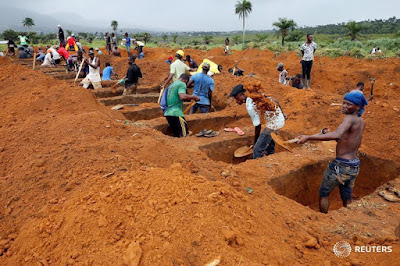 From a very large series of pictures based on recycling this week I could not resist picking out Thierry Gouegnon’s image of a woman carrying utensils made from recycled metal. The brutal vertical line of the corner of the building, almost cutting the picture in half, gives it a mirror image feeling. I love it that the woman’s foot almost touches this imaginary line; and if it did it would break the mirror-like spell. Looking at the position of the people in the frame, especially the person on the right, what also springs to mind, is a still taken on 360 VR where you can see front and back at the same time. 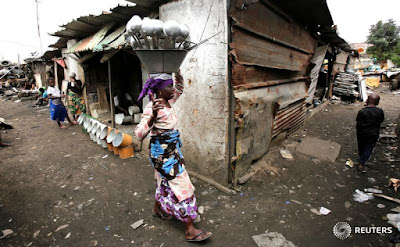 A woman walks with kitchen tools made of recycled sheet metal in a recycling area in Anoumambo, Abidjan, Ivory Coast August 17, 2017.    REUTERS/Thierry Gouegnon

A simple detail picture by Afolabi Sotunde demonstrates the force with which flood waters and mud swept through homes in Pentagon, near Freetown, Sierra Leone.  As you take in the sharp contrast between the white exterior wall and debris crammed against the bars of the window, it dawns on you what little chance of survival the occupants had. 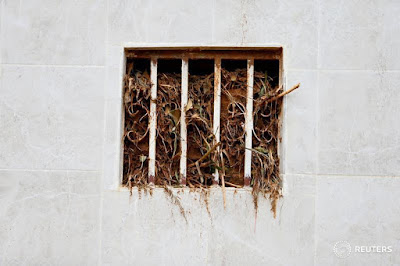 Debris is seen inside the window of a house along the valley after a flash flood at Pentagon, Regent Town, Sierra Leone August 18, 2017.   REUTERS/Afolabi Sotunde

A captured expression, no matter how old the subject, can reveal innermost thinking, which is the essence of great portrait photography.  There is little doubt in my mind what this baby is thinking in Amr Abdullah Dalsh’s picture during baby swimming lessons. This involves dunking the babe’s under the water, counter intuitive to me, but apparently it teaches them to hold their breath, enables them to sleep better and improves their flexibility.  Intrigued? If so read on here. 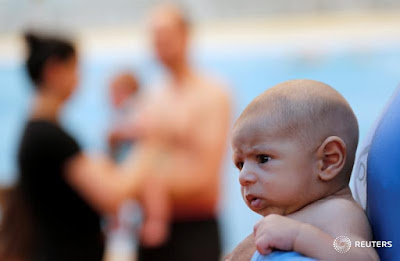 An Egyptian baby boy his held by his father before taking part in swimming lessons, the first of its kind, in Cairo, Egypt August 15, 2017.   REUTERS/Amr Abdulalh Dalsh