A new front opened up in Iraq as government troops supported by Shi’ite Popular Mobilization forces started to try to retake Tal Afar from Islamic State. I really like the strong composition of this picture. The eye is led from the flags in the foreground through the picture by a strong reversed S shape as armoured vehicles make their way through the dust to the distant battle front. 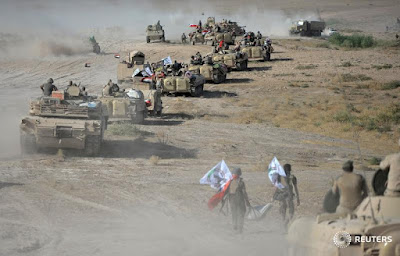 Very much on the theme of strong composition driving an image, I am drawn to this stark, grey picture from an oil refinery in Bahrain. It works well for me because the lines of the picture lead you to people who are so small in the frame that without this visual aid they’d be almost invisible. The notion of people going for an evening stroll among the refinery pipelines lifts this picture from something that would be quite inanimate to something much more intriguing. 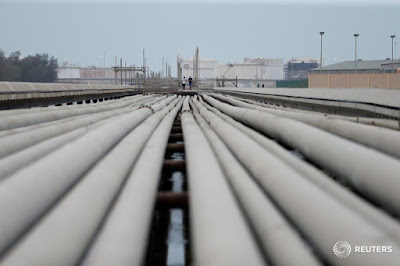 Dust consumes the whole of Omar Sanadiki’s picture, flattening it to a monochromatic relief after a Hezbollah tank fires, giving the landscape a space-like appearance. I can’t help thinking about the storm scene in the film The Martian, the figures battling against the dust cloud. What adds to this impression for me is the almost clumsy slow motion steps of the soldiers and the lumbering alien look and feel of the armoured vehicle; we can’t quite make out the classic ‘tank’ shape through the dust and backlight, but we know it’s there. 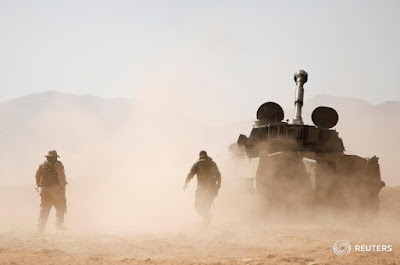 I think detail pictures are often some of the most revealing images from a sequenced picture story. A close-up of an item can explain so much when we can see every detail. Akintunde Akinleye’s well-observed picture of a money changer’s tools of the trade is one such case. To me this picture speaks of poverty but a determination to create wealth through trade. Old and well thumbed notes are displayed on a very grubby plastic table top. The coins that look like they may have been cast in a previous millennium are  scattered about or piled neatly, no doubt according to their value. Lastly, the digital calculator, which is probably used to haggle and squeeze the exchange rates, is left on a pot of items that make no sense to me at all. The padlock is unlocked and  the money box open and ready for business. Just from these small details I feel I can almost see the face of the money trader – can you? 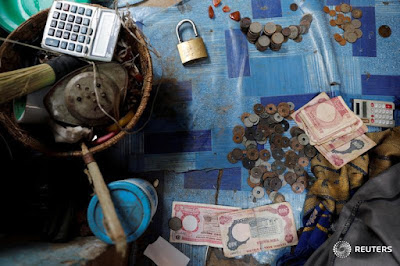 Old Nigerian currency is seen on a ‘carpet’ in a local exchange shop in the old district of Nigeria’s northern city of Kano, August 24, 2017.   REUTERS/Akintunde Akinleye

It would be wrong to avoid including images from Yemen of victims being dug out of a housing complex after an air raid. Again we have to struggle with the topic of showing the effects of war on civilians, especially children. The pictures shot by Khaled Abdullah are as powerful as they are distressing and as a professional news photographer working in a conflict zone he is careful to photograph all he sees to tell the story fairly and honestly. He presents the most brutal images of dead children, their faces crushed, their broken bodies covered in dust, being carried away by rescue workers, alongside pictures of a general view of mechanical earth movers operating around the destroyed building. Editors must be given all this content so they can choose what to publish, telling the news but treating their readers with understanding. My view is that these images of death in conflict should be published, but in an honest, factual and non-sensationalist way, and with no hiding from what is going on. At the same time they should never be gratuitous and should always display humanity. I believe that it’s the first glimpsed moment of a picture that is burned into the mind forever. Publishers, and anyone who uses social media -- Twitter, Instagram or Facebook -- is now a publisher and should shoulder this responsibility. For myself, I added a notice of graphic content to this post giving the reader the choice to see or not to see, to know or not to know. I have also left on the graphic content warning on the caption that our clients see too. You may disagree, believing that all should be seen, thrown into the reader’s face, those images burned into the mind forever, and I have failed to show the real brutality what is happening. In the picture I have chosen the child is alive but injured, the rescuers’ body language offering hope. Others may feel that what I have posted is itself gratuitous, after all who wants to see pictures of injured children? Khaled followed up on this girl's story and it can been seen here - GRAPHIC CONTENT. 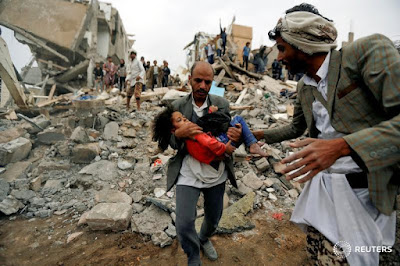 A man carries an injured girl, rescued from the site of a Saudi-led air strike in Sanaa, Yemen August 25, 2017.     REUTERS/Khaled Abdullah 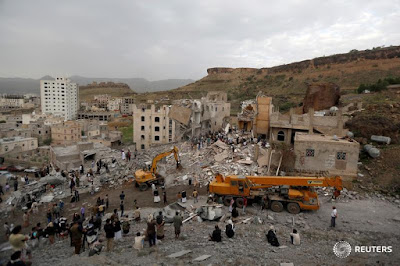 People search under rubble of a house destroyed by an air strike in Sanaa, Yemen August 25, 2017. REUTERS/Khaled Abdullah

Often it's timing that makes a simple picture a little bit special. Luc Gnago's picture of of a sick man waiting to attend church is one of these. The three figures are joined by a moment in time. You look up from the sick man's head along the covered leg of the man in the rear, his hand reaching forward to connect to the woman in the foreground, his orange scarf only just touching the blue of the woman's robe . Your eye is led back down the picture  through her hand and back ti the sick mans head, the cycle complete. And all this in a picture that on the surface looks like two people just walking past someone who is lying sick on the ground. 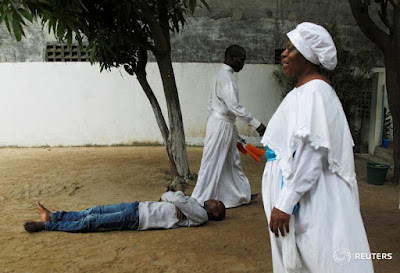 Members of the Celestial Church of Christ walk next to a sick man before worship at the church in Abidjan, Ivory Coats, August 25, 2017.    REUTERS/Luc Gnago