Middle East and Africa Pictures of the Week August 13, 2017

Rival demonstrations took place as the decision was made on whether a vote of confidence in President Zuma should be a secret ballot. Hundreds took to the streets and Mike Hutchings darted between opposing rallies. Using a long lens,  Mike filed this picture to show the number of people present, a good picture in its own right. But a crop bought the cut-out caricature image of Zuma from the background, where it was ‘hidden’ by the signs saying ‘the truth will set you free’ and ‘Woodstock’, to the foreground. 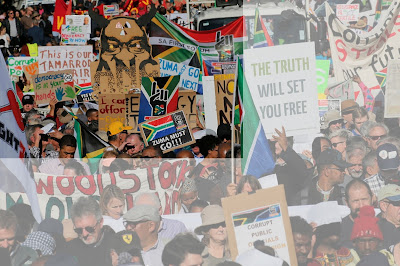 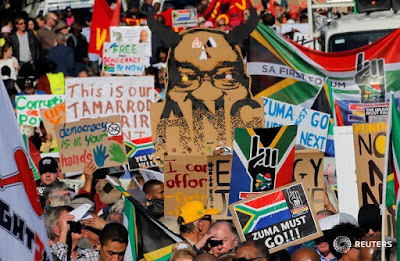 Queues of Kenyan voters snake from left to right as they wait to cast their votes in the early morning.  I love the order of the lines, where people stand with almost equal personal space between them. But what I like most is that the order breaks down and the line meanders about. A picture of ordered calm where chaos and violence is feared. 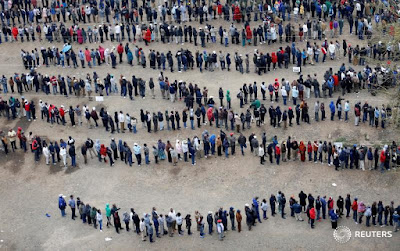 People queue outside a polling station in Nairobi Kenya waiting to cast their vote during the national election August 8, 2017.  REUTERS/Thomas Mukoya

Showing the horror of a death during a riot is never easy. You need to show enough of the body to ensure the news is covered but not so much of the horror that it either offends viewers or removes all dignity from the victim. Thomas Mukoya’s picture of a woman reacting to a death during clashes after the Kenyan election does just that. You can almost hear the screams from her contorted face, your eye led immediately from her mouth and up from the corner of the picture along the line of the edge of the building to the slumped body on the ground. There is enough depth of field so you can see the shape of the body but not so much that the focus is on death. This picture is the reaction of the living to the sight of death. 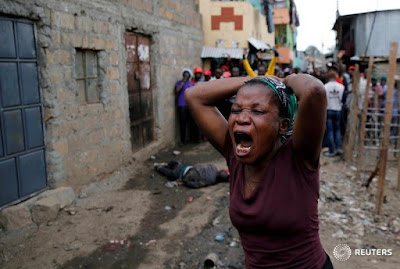 A woman screams and gestures as she mourns the death of a protester in Mathare, In Nairobi, Kenya, August 9, 2017.   REUTERS/Thomas Mukoya

Often it’s the unexpected that catches the eye. Images from the battle for Raqqa would could be expected to show monochrome destruction and violence and we have plenty of them on the wire. Zohra Bensemra’s affectionate portrait of a YPG fighter taking a selfie in a relaxed moment is an antidote to the violence. A bright yellow hat band is almost perfectly matched in colour and tone with graffiti on the wall. The reds, greens and blues, and black and white lines of graffiti dancing like an abstract painting, but that could be because I cannot read the Arabic text. What is nicest for me in this array of colour is that the young soldier is as relaxed as if she is doing a picture of her new hat at the Royal Ascot races and not in the battle torn streets of Raqqa. 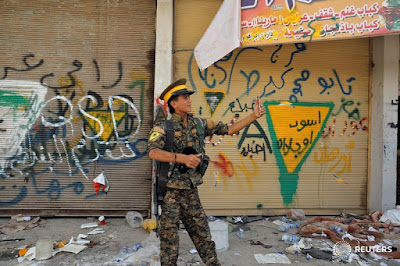 It would be easy to think this is a still from a movie. It’s not. Mohamed Torokman’s picture is perfect in its screen-like composition, red flames and black smoke highlighting the soldier, sunlight catching his face and hands as he aims his rifle. If the solder was a little to the right or left or the flames a little lower this picture would not work. All the dark green of the uniform and black smoke would kill the shape. What can’t be seen in this picture are protesters who are hurling rocks at him during clashes at the West Bank. 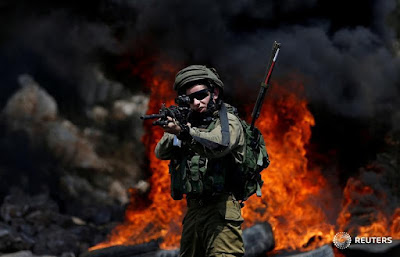 An Israeli soldier walks points his weapon toward Palestinian protesters during clashes in the West Bank village of Kofr Qadom near Nablus August 11, 2017.  REUTERS/Mohamad Torokman

Sometimes you get so pent up and angry when you are trying to make a point or get yourself understood you just want to scream. I think Afolabi Sotunde’s picture captures that very moment, a simple and direct portrait but full of emotion about to burst. 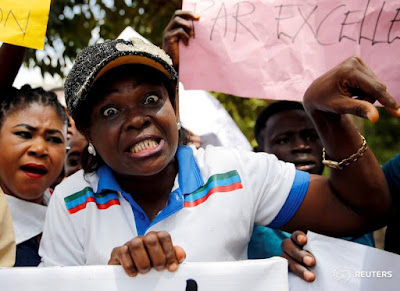 Supporters of President Muhammadu Buhari rally at the Unity Fountain in support of his Administration in Abuja, Nigeria August 11, 2017.   REUTERS/Afolabi Sotunde

The strength of this image is that it is almost abstract; it could be easily missed as it takes time to understand what is going on. The fact that Zohra Bensemra has taken the visual risk to transmit a picture that is so unexpected and very different, from a war zone, can only be admired. After the dark shadow on the left the first thing you see is the pink object, a water tap, itself somewhat unexpected. Then you begin to see the running water, its shadow and the stains on the wall. Soon the image that initially looked abstract takes form. 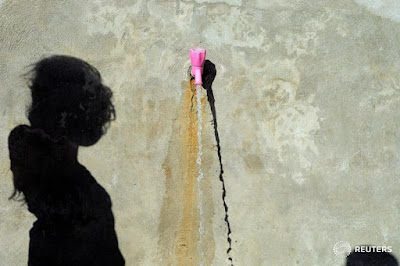 The shadow of an internally displaced girl who fled Raqqa is cast at a water point at a camp in Ain Issa, north of Raqqa, Syria August 12, 2017.   REUTERS/Zohra Bensemra