Relatively late in the day on Friday Siphiwe Sebeko filed this picture of a supporter at the inauguration of Zimbabwe's new president. that I wanted to include it as an update. At first look it's a wide picture of a supporter in a crowd holding a banner that says 'Thank you Zimbabwe'. I could not resist cropping this to bring out what I really like in this picture, the sea of faces in the banner that almost matches the sea of faces in the crowd. As a foot note to my thinking; had I left it as a tighter cropped horizontal (as I wanted to) I felt the red shirt of the man on the right would have been too much of a distraction. Agree? 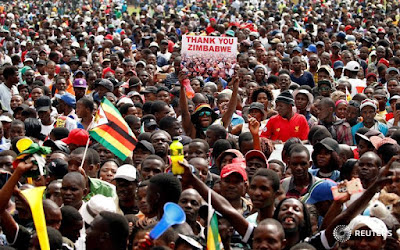 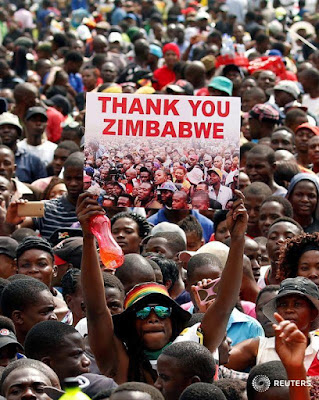 Good pictures of people waiting for something to happen are hard to shoot. People are not doing anything, just waiting. But that in itself presents an opportunity, translating a long period of quiet and calm into something visual can produce powerful pictures that ooze tension, apprehension, anticipation, hope, longing and boredom. Both Ibraheem Abu Mustafa and Suhaib Salem, in my opinion, have achieved just that. 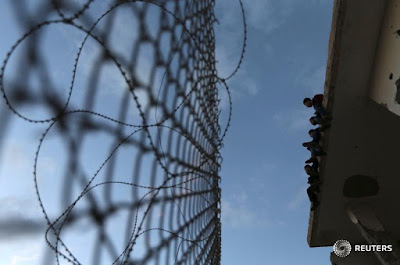 Palestinians wait for relatives to cross into Gaza, after Rafah border crossing was opened under the control of the western-backed Palestinian Authority for the first time since 2007 in Rafah in the southern Gaza strip November 19, 2017.   REUTERS/Ibraheem Abu Mustafa 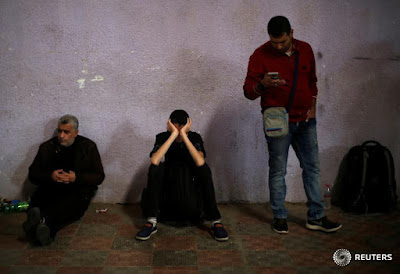 Palestinians wait for travel permits to cross into Egypt after Rafah border crossing was opened under the control of the western-backed Palestinian Authority for the first time since 2007 in Rafah in the southern Gaza strip November 19, 2017.   REUTERS/Suhaib Salem

Again a disturbing image of an injured child needs to be seen, as the story of the besieged town of Douma in Syria unfolds. It’s not the injured arm that disturbs me in Bassam Khabeih’s picture, but the sheer terror in the child’s face. That fear is accentuated by the light reflected in his eye, while his tense and open mouth fight for your immediate attention with the blood on the white table. The strong diagonals of the line of the wall and the markings on the floor draw you back in, not allowing you to look away. 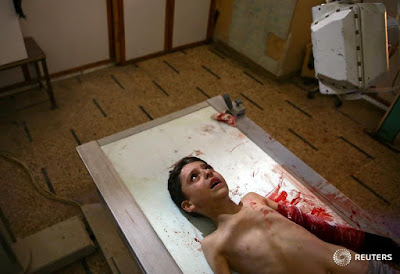 You can almost taste the tension in Philimon Bulawayo’s picture as Robert Mugabe fails to announce his expected resignation in a live television broadcast. You don’t need a caption to tell you what the men are talking about as your eye dances around the greens, reds and blues of the bar’s lighting that create negative and positive shapes formed by the men’s profiles and their incredulous lips. 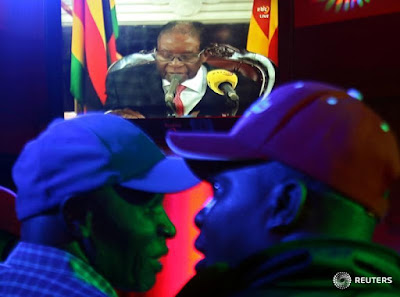 People talk as they watch television in a bar in Harare Zimbabwe as Zimbabwean President Robert Mugabe addresses the nation November 19, 2017.    REUTERS/Philimon Bulawayo

Not many know there was a stampede of people in Morocco when food aid was being distributed. Fifteen people were killed. Youssef Boudlal’s picture of grieving relatives is a haunting reminder of this easily ignored tragedy. As a viewer, I am not sure if the women are hiding from the camera or grieving, I suspect both. For me, the strength of this picture is the small boy who peering around from the back of the woman who is staring into space. His presence, like the news of the deaths at the stampede, is easily missed. 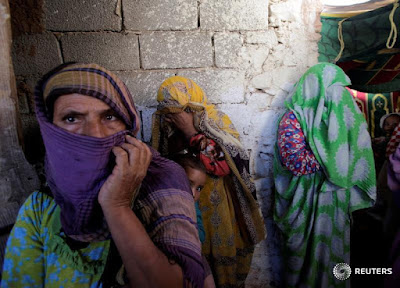 Relatives mourn the death of Lakbira Essabiry, one of the people who were killed when a stampeded broke out in the south western Moroccan town of Sidi Boulaalam as food aid was being distributed in a market, in Sidi Boulaalam, Morocco November 20, 2017.   REUTERS/Youssef Boudlal

A bible-holding supporter of President Kenyatta screams into the air with joy, as people celebrate the news that a court had upheld his re-election. The relief on the faces of these people in Baz Ratner’s picture is so powerful that the visual noise of the yellow line, white pillars and railings don’t destroy the image. A close look reveals that the bible is open at Kings 2, Chapter 12, ‘Joash repairs the Temple’. I hope that rebuilding is the theme of the presidency after all the clashes. 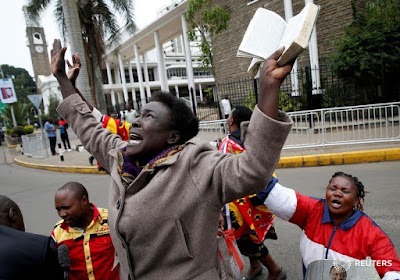 I have little secret, I love good pictures that illustrate business stories especially when they are about commodities. Mining, oil pictures from drilling to the global impact of price changes, and agriculture are particular favourites. So how could I resist Khalid al-Mousily’s symmetrical picture of a small mountain of sugar in Iraq, a man in black striding purposefully towards it. A picture with great shape that jumps out at you and can be used well on any platform, from a small screen on a mobile device or as a double-page spread in a magazine, or on an advertising hoarding in the street. 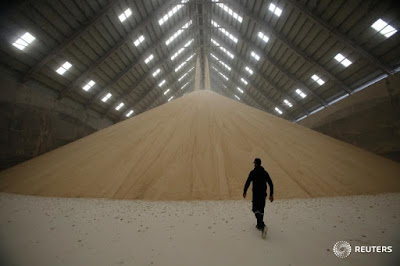 An employee checks raw sugar at a sugar refinery in the city of Hilla, Iraq, November 21, 2017.   REUTERS/Khalid al-Mousily

Amid the euphoria of Zimbabwe it would be easy to forget the crisis in Yemen, if only for a day. But there is no respite as Khaled Abdullah’s picture brings our minds quickly back to what is going on. It’s hard to tell the age of the person with thin and fragile legs until you realise that this helpless child is so tiny that he is on a set of scales designed for weighing babies. For me, the fact that you do not see the face of this malnourished boy gives a sense of the wider issue of hunger created by conflict in Yemen, and not just one person’s story. 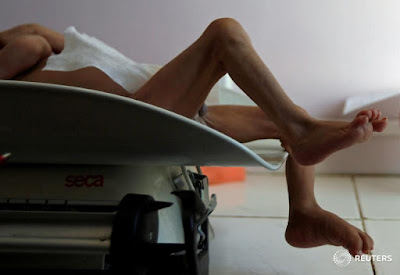 A boy lies on a weighing scale at a malnutrition treatment centre in Sanaa, Yemen, November 22, 2017.   REUTERS/Khaled Abdullah

Almost a week of rising tension in Zimbabwe ended in an explosion of joy, relief, all night parties and smiling faces after fears that the transition of power from Mugabe would be bloody proved unfounded. Hard to chose one picture from Mike Hutchings but I think the frame full of smiling faces is a winner for me. I wish I was there. Have a look at more pictures here to lift your spirits. 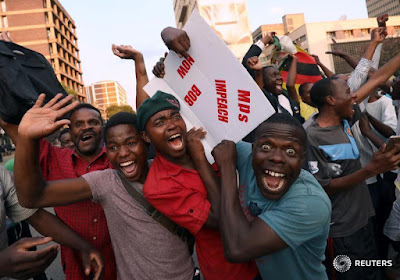 Zimbabweans celebrate after President Robert Mugabe resigns in Harare, Zimbabwe November 21, 2017.  REUTERS/Mike Hutchings
One might not immediately think of Libya in terms of sun, sea, sand and … motorbikes.  So it’s therefore impossible to not include Ahmed Jadallah’s simple but affectionate picture of bikers, some of whom belong to the ‘Monsters’ group, on a Libyan beach. Although the picture was taken a while ago I’ve included in this week’s round-up as it was only published this week. You can read on here. 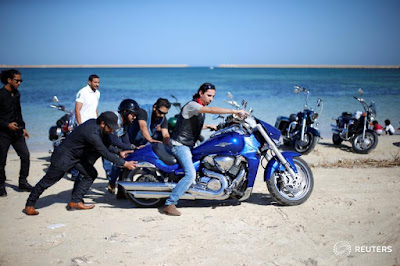 Members of the Tripoli bikers group ride their motorbikes at the beach in Tripoli, Libya November 4, 2017.  REUTERS/Ahmed Jadallah
Posted by Cropperboyce at 08:13