A week in Pictures Middle East and Africa November 17, 2017


Some gestures seem more futile than others at demonstrations. Khaled Abdullah’s picture of a man holding up a dagger seems to shout out anger and frustration, which gives the picture its strength. There is no mistaking the knife’s shape, the silver metal glinting in the sun with violent intent. The hand holding the knife is central in the frame, thrusting up to pierce the perfect blue sky, while the scene around the blade seems to lean into it. The picture says to me there will be more bloody violence. 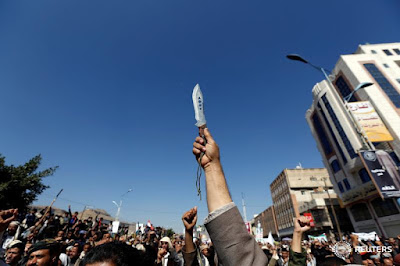 A supporter of the Houthi movement waves a dagger during a demonstration in Sanaa, Yemen against the closure of Yemen’s ports by the Saudi led coalition November 13, 2017.    REUTERS/Khaled Abdullah

Following the theme of blue skies being pieced, how could I ignore Satish Kumar’s affectionate and gentle picture of a broken heart? What I like about this picture is the imperfection of the heart’s shape as the fumes melt away, taking the edge off the blue sky and the irregular red headscarves. After all, the pursuit of matters of the heart is rarely perfect. See Editors Choice here. 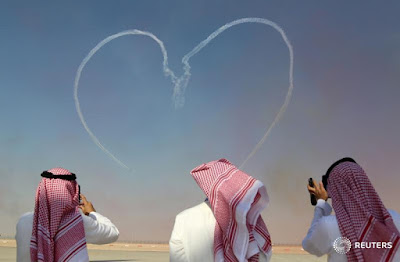 I am always a sucker for a graphic shape. Here, colour is drained from the scene to leave a cold, monochromatic stage for a figure in isolation. Mike Hutchings’ classically composed picture gets my vote this week. I love the overall shape that is aided by a tilt that is not so overdone that you feel you are slipping off the picture. In a perfect world I might have wanted the figure to be taking a more pronounced step, but we don’t live in a perfect world. 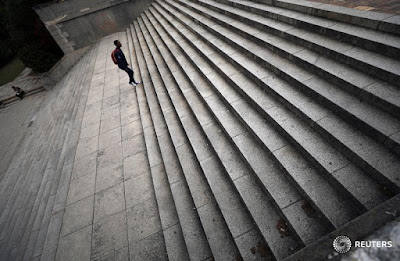 A Student walks up the steps in-front of the University of Cape Town’s Jameson Hall in Cape Town, South Africa November 13, 2017.   REUTERS/Mike Hutchings

Suhaib Salem’s picture from the commemoration of Arafat’s death is a very sophisticated composition that slowly works its way into your mind. It is a busy, back-focused and harshly lit image that invites you into the complex web of vertical and horizontal lines of scaffolding punctuated with yellow flags. Slowly you are drawn out to the man at the bottom right. His face is partly hidden by the shadow from his hand as he shields his eyes from the harsh light, looking a little like a character from superhero comic book. 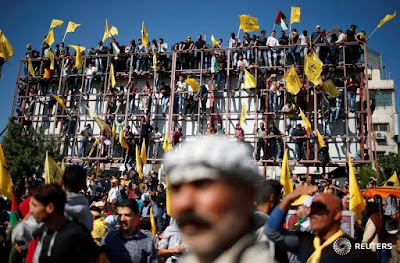 
There is no ignoring the upheaval in Zimbabwe this week. As you can imagine it is a difficult story for a photographer to cover. But two pictures by Philimon Bulawayo  caught my eye, both images conveying a feeling of tension and unease. The first shows a woman carrying a child as she passes a military vehicle, her eyes darting across the picture as quickly as she darts through the nearly empty streets. The second is also a captured momentary glance, as a saluting officer looks across from Mugabe at a graduation ceremony. What I also like is the contrast between the different shapes of the hats they are wearing: the soft curve of the officer’s cap compared with to the sharp angles of the mortar board worn by Mugabe. See more pictures from Zimbabwe here. 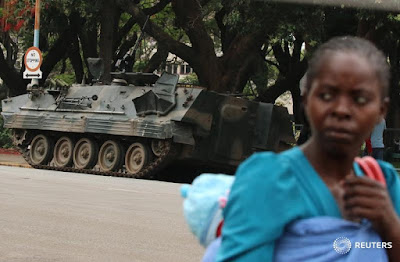 A woman hurries past an armoured vehicle outside the parliament building in Harare, Zimbabwe, November 16, 2017.   REUTERS/Philimon Bulawayo 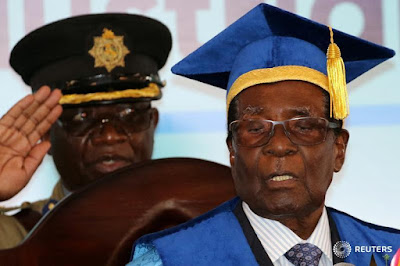 Violent clashes have again broken out in Kenya, with stone-throwing protesters up against riot police, who fired tear gas. Nothing illustrates the confusion and chaos better than Thomas Mukoya’s image of people being hit by vehicles speeding away from the tear gas. Something else that strikes me in chaotic scenes is how ordinary objects seem to take on greater importance, or how ‘quiet’ pictures can sometimes be the strongest. The colours in Baz Ratner’s image initially lead you away from the fact this man is injured. First you see the yellow shirt, then his arm leads your eye to the water bottle. (Why is he still holding onto something so unimportant? Maybe as an antidote to the effects of the tear gas?). Then you see the reds of the shoes. The grey of the open space on the left then  makes you look back at the blood-covered face. Although the man looks in a bad way, Baz confirms that he was not killed. See more pictures from the clashes here. 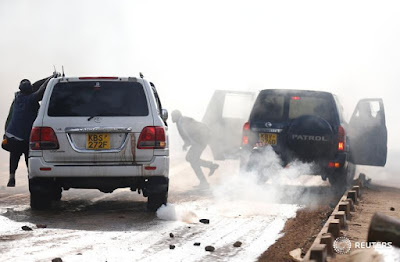 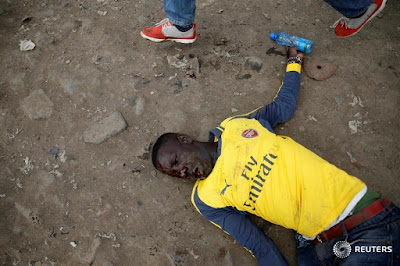