A Week in Pictures Middle East and Africa January 11, 2019

A belated happy New Year to all. It might have gone unnoticed that in UAE Hamad I Mohammed photographed what appears to be an alien landing. Well, that is what it looks like to me or maybe it’s a sneak preview of Blade Runner 3. A beam of light shimmers from the Burj Khalifa as if the occupants of an alien craft are searching for something or someone in the grey-brown tower blocks. You can see the best of Reuters 2018 here 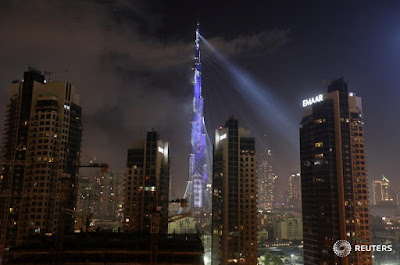 The Buri Khalifa us lit up during new Year celebrations in Dubai, United Arab Emirates, January 1, 2019.   REUTERS/Hamad I Mohammed

The composition of Mohamed Nureldin Abdallah’s picture is ‘in your face’ very much as his lens was in the face of the security guard to produce this striking picture. The blue of the sky creates a clean backdrop for the strong shapes and lines to cut across. Am I worried the face is not perfectly cut in half or that the cane extends beyond the edge of the frame? Not at all, as this makes the image bleed wider than its borders, giving it a ‘big screen’ feel. 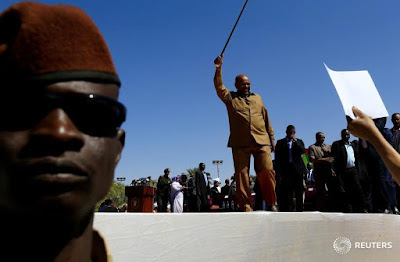 Sudan’s President Omar al-Bashir waves to his supporters during a rally at the Green Square in Khartoum, Sudan January 9, 2019.    REUTERS/Mohamed Nureldin Abdullah

Perfect timing as the ashes leave the shovel in front of the rising sun gives a powerful left-to-right compositional flow to Feisal Omars’s picture. The figures on the left in the background help to echo the wider V shape that makes up the dark foreground. The bare branches of the tree cut through the haze of rising smoke and the handle of the shovel adds to this compositional echo. 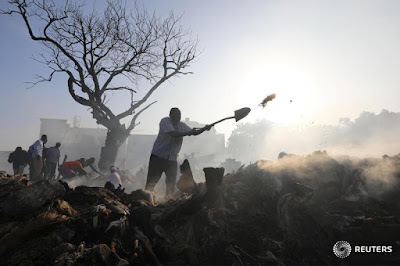 A trader uses a shovel as he attempts to recover his merchandise within the smoldering remains of clothing stalls after an overnight fire at the Bakara market in Mogadishu, Somalia January 11, 2019.    REUTERS/Fesial Omar

A strange moment captured by Olivia Acland as people react to election news in DRC. Your eye goes immediately to the blue cross and then quickly to the figure on the right, hand on head, mouth open and eyes closed with tears, his colleagues closing in to console him as they look at a picture of their leader. But look deeper into the picture. A woman is smiling and posing as she seems to be shooting a selfie of herself in front of election banners. 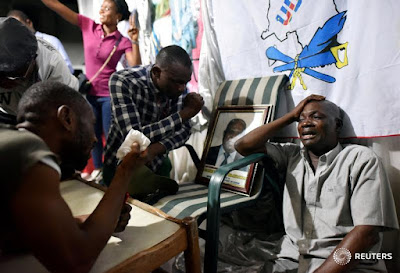 Supporters of Felix Tshisekedi, leader of the Congolese main opposition the Union for Democracy and Social Progress (UDPS) react at the party HQ in Kinshasa, Democratic Republic of Congo January 10, 2019. REUTERS/Olivia Acland

I’ve broken my own rule and added a picture with no watermark (so no stealing please), the reason being that it completely destroys the key focal point of Philimon Bulawayo’s picture - the upward look of the man. Confusing action of what appears to be people jumping up and down is exaggerated by the left-hand-down tilt of the picture and countered by the upwards look of the salesman. 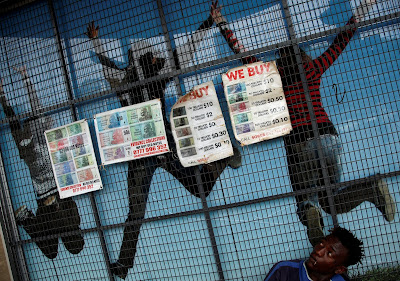 A giant wave of people swirls around Fayulu in Baz Ratner’s picture. It’s as if the arms of his supporters are spinning the shape and flow of the image around and around so you are drawn into the picture like a whirlpool. What I admire too is that I know exactly how much energy and hard work it would have taken for Baz to get into this position through the crowds of supporters. More on the election here 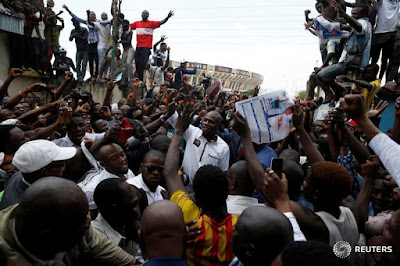 ‘Shit Happens’ it most certainly does and I am drawn uncomfortably to Ibraheem Abu Mustafa’s powerful picture. On one hand I cannot help but admire the perfect visual combination of the wording on the man’s shirt and the injured boy. But I am also aware that the boy is suffering greatly and his injury will probably blind him in one eye. I would much rather that this image did not exist and the boy had his sight. But he was injured, we report the news as it happens, and ‘shit happens’. we are following up to see what has happened to this boy. 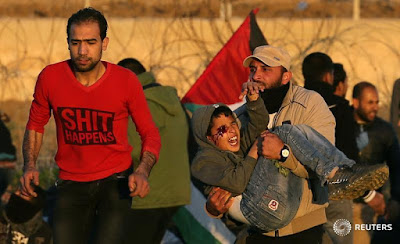 A wounded Palestinian boy is evacuated during a protest at the Israel-Gaza border fence, in the southern Gaza strip January 11, 2019.   REUTERS/Ibraheem Abu Mustafa