A Week in Pictures Middle East and Africa January 18, 2019

We responded quickly to the attack in Nairobi and the team had pictures on the wire within minutes, filling the international news websites with powerful images. I have selected two images from the story. The first by Thomas Mukoya, perfect in its composition, creates an atmosphere of extreme but silent tension. This tension derives from the visual flow of the movement from left to right, the position of arms, feet, hands and eyes as the soldier carefully checks that it’s safe to move. The whole scene unfolds against a backdrop of alternate light and dark tones. More on the story here 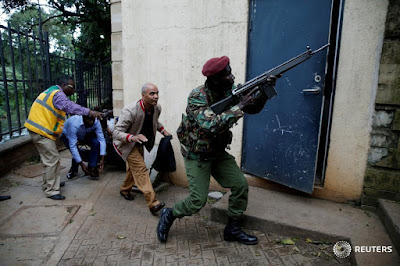 A member of the security forces keeps guard as people are evacuated at the scene where explosions and gunshots were heard at the DusitD2 hotel compound in Nairobi, Kenya, January 15, 2019.   REUTERS/Thomas Mukoya

Baz Ratner’s picture is basically a similar moment, a soldier leading people to safety, but has such a different feel. Unlike Thomas’s picture, where you see people led to safety in fearful silence, in Baz’s picture they are crushed into a small space, all lines leading to the woman grimacing in fear. It feels noisy to me as the soldier looks up out of the frame. I like it that you only get the smallest glimpse of his eye. Any more of his face and the image would have a different focal point: the soldier. Any less and he would appear as a green shape obstructing the visual action in the rear. 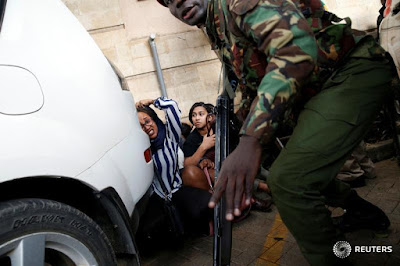 People are evacuated by member of the security forces at the scene where explosions and gunshots were heard at the DusitD2 hotel compound in Nairobi, Kenya, January 15, 2019.   REUTERS/Baz Ratner

What is most striking in Philimon Bulawayo’s second pick this week is that it’s very rare to see such striking flames and running demonstrators in the driving rain. Heavy rainfall often dampens both, so what we are seeing may be a good indicator of the anger felt by those protesting in this compelling picture. More on the Zimbabwe story here 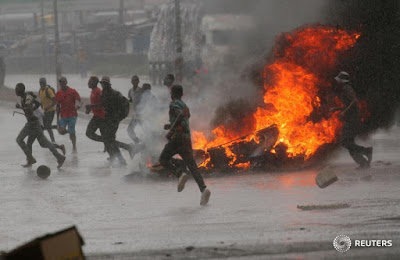 People run at a protest as barricades burn during rainfall in Harare, Zimbabwe January 14, 2019.   REUTERS/Philimon Bulawayo


Even though the prisoner in Philimon Bulawayo’s picture is surrounded by police he looks lonely and defenceless. The position of the police, helmets on, face shields down, batons ready, keeps your eye focused on the prisoner as he occupies the central empty space. You then see the hand that also directs you to the central figure. Another prisoner is being directed to this open space. Some company for our lonely prisoner. No doubt there will be many more. 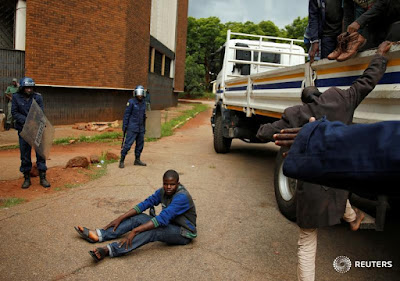 A simple but eye-catching picture from Mohamed Abd El Ghany is an easy pick this week. A sandstorm sweeps into Cairo, obliterating the skyline to create this eerie, sepia-toned image. What makes this picture work well is the wrapped-up figure, bold in shape, with the palm trees in the background bowing against the wind. 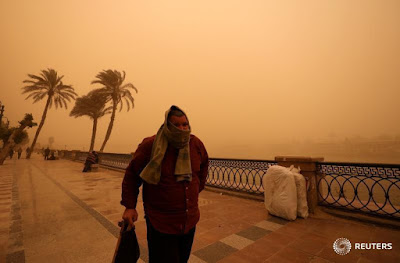 A man covers his face during a sandstorm near the River Nile in Cairo, Egypt January 16, 2019.   REUTERS/Mohamed Abd El Ghany


A lucky accident of timing, a well-handled crop and a bit of fun from Suhaib Salem as the ball bounces to create the illusion that Muhsen al-Ghassani’s head is actually a football. The reason this works so well is that the background is clean, the ball’s position is perfect and the colour is nice, allowing us a gentle smile. 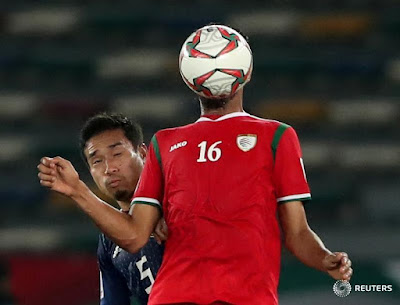 Zohra Bensemra’s picture is a gentle look at football spectators in Senegal. You can almost feel the warmth of the sunshine off the wall and the gentle breeze blowing through the gaps as two relaxed figures enjoy the peace of the moment. I’m not sure if the wall is being constructed or in a state of disrepair, but it doesn’t matter. What does matter is the clever use of shape and line. 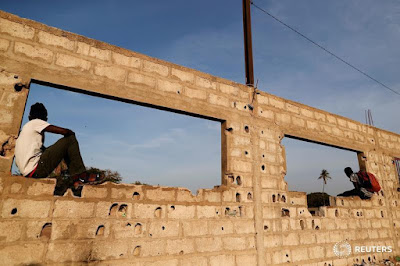 
Francis Kokoroko’s picture reminded me of a series of landscapes titled ‘Shot at Dawn’ by Chloe Dewe Mathews. The main difference is that the echo of silence felt in Chloe’s pictures, which have no people in them, is broken in Francis’ image by the quiet phone conversation being held by a man standing alone in a wide nondescript setting. We are not sure the killing actually took place in this spot, but the mood, like the cool tones of the blue wall, is very sombre. 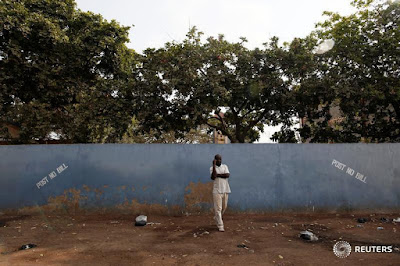 A man talks on the phone in a street believed to be where Ahmed Hussein-Suale, an investigative journalist, was shot dead in Madina, Accra, Ghana January 17, 2019.   REUTERS/Francis Kokoroko

I love the fan-like rhythm in Maheder Haileselaisse’s picture, with perspective lines that would have made medieval painter Paolo Uccello sing with joy. I love, too, the equally spaced dots of colour and highlights in the scarves of the women that break up the lines of the production tables. It also makes me reflect on the effort involved in producing coffee in some parts of the world. Even though it was shot in November, the full story was only published this week. That gives you an indication of how long some stories take to produce.  See the story here 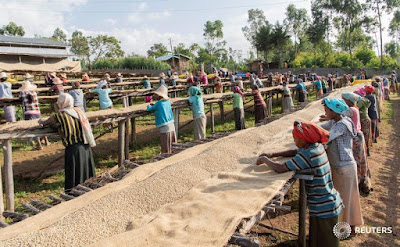 
There is no mistaking the power and energy in Thierry Gouegnon’s picture. What I like too about this, again using a painting theme, is the sense of cubism in the design. Hands, arms, elbows and faces all come in from different directions, some elements visible to make sense, other elements obscured and truncated only to be completed visually in a different part of the picture. 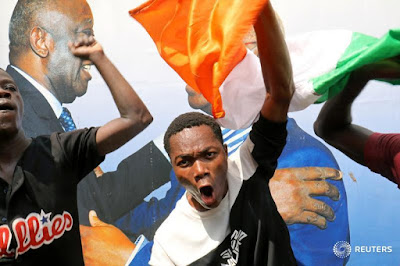