It’s hard to tell the story of the damage and destruction of Cyclone Idai in one picture but I think Siphiwe Sibeko has gone a long way to tell it in two. First you need to get a sense of the scale of the destruction. A far as the eye can see there is nothing but waterlogged destruction in this flat landscape shot from a helicopter. 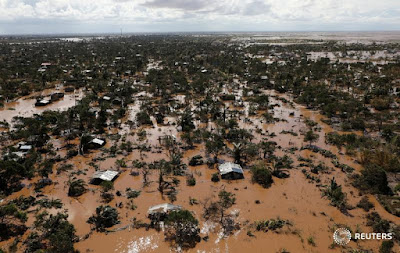 And once you have the sense of scale you need to see how Cyclone Idai is affecting families: the human cost. Initial reports were that this cyclone may impact as many as 200,000 peoples’ lives. That figure is so large that it’s almost meaningless until you see a family trying to protect their young child from the water in a floating fridge. The wave from the boy is not so much a plea for help but perhaps more ‘we’re okay because we are alive’. See the latest here. 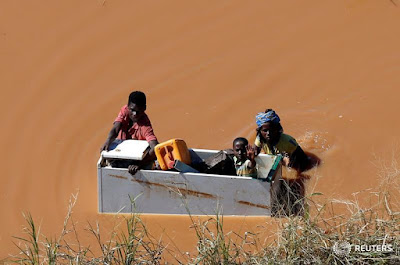 A child is transported in a fridge in floods after Cyclone Idai in Buzi district outside Beira, Mozambique, March 21, 2019.   REUTERS/Siphiwe Sibeko

The mood of Maheder Haileselassie’s image is dark. Through the strong back light you  catch glimpses of people’s faces, occasionally getting a hint of photographic portraits in the shadows or in reflected highlights. The coffins and portraits of the victims of the Ethiopia Airlines ET 302 crash are laid to rest. A sad moment well captured. But at the rear of the image you see many people working together to help lift the weight of the coffin. Maybe this shared action brings solace to those collectively grieving?  More images here 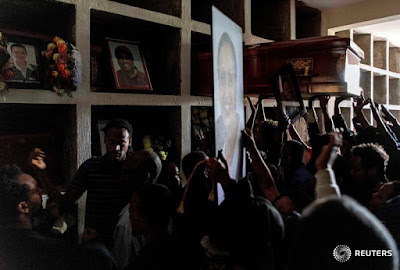 Workers carry a coffin of a passenger of the Ethiopian Airlines Flight ET 302 plane crash, into the wall vault cemetery of Balewold Church, part of the Holy Trinity Cathedral in Addis Ababa, Ethiopia March 17, 2019.   REUTERS/Maheder Haileselassie

Khaled Abdullah’s story is about Afaf, a malnourished child from Yemen. It was hard to choose one picture from the series as there are so many powerful yet subtle images. This image haunts me as all I see are her dark, hollow and sad eyes. I barely notice the beauty of her face, the richness of the colour of her dress or even the pale face of the out-of-place doll and the pink dress. Those eyes stare out at me as I fear she has just given up. But maybe I am wrong. Someone who has seen Khaled’s pictures and read the story has offered financial help. I hope that works out. Read the story full here 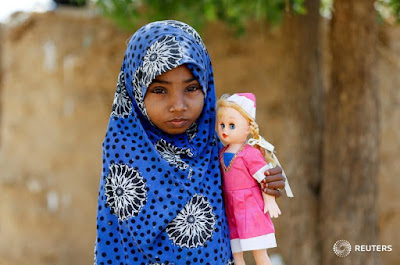 Afaf Hussein, 10, who is malnourished, holds a doll near her family’s house in the village of al-Jaraib, in the northwestern province of Haijah, Yemen February 20, 2019. Afaf who now weighs around 11kg is described by her doctor as ‘skin and bones’.   REUTERS/Khaled Abdullah

At first glance, Mohamed Torokman’s picture appears to be just black with a hint of mid tone here and there. But the eye wants to make sense of it and very quickly, through the dark smoke, you pick out the forehead and nose of the masked protester. Take more time to look and you get the hint of shape behind this masked man. Is it a fire? Is it a hand holding a catapult, stretched to its limit is about to release the rock, the image, like the scene, is dark and angry. 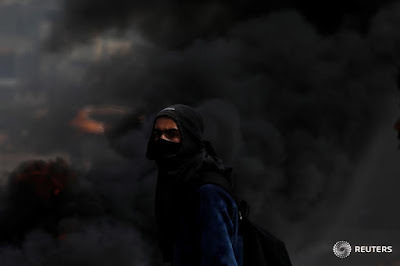 A Palestinian protester watches during clashes with Israeli troops near the Jewish settlement of Beit El, in the Israeli-occupied West Bank March 20, 2019. REUTERS/Mohamed Torokman

Also forming shape from abstraction is Ammar Awad’s picture from the scene of a shooting. We see the three highlights of bullet holes and are quickly aware of the blue glove. It’s then we notice the face of the forensic officer. The bullet hole lines up almost exactly over his eye, maybe mirroring the bullet wounds from the attack. 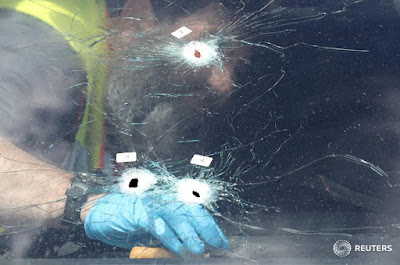 Would Ammar’s picture be too abstract if the glove was cropped out? I add this visual idea for you to choose. 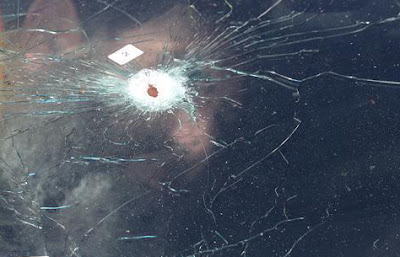 To illustrate an ongoing company news story like Eskom you need to refresh the file regularly with images that can be used as both as news pictures on the day and then, on occasion, as stock. These images are not easy to shoot as they have to be timeless, great quality, eye-catching and, obviously, illustrate the story. Siphiwe Sibeko’s perfectly timed picture does all that and more. It speaks of power, light, darkness and has figures trudging through the image as if they are preparing for another blackout as the clouds gather. 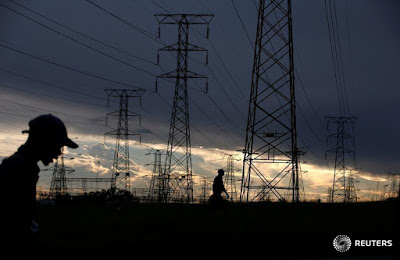 
What is immediately attractive about Ahmed Jadallah’s picture is the warmth of the tones and the warmth of the man’s smile. The diagonal composition that cuts from top let to bottom right gives a wonderful impression of the procession that snakes from the cool blue mountain skies in the background to the warmth of the flames in the foreground. It’s an affectionate and respectful picture of celebration. Rejoice spring is here! 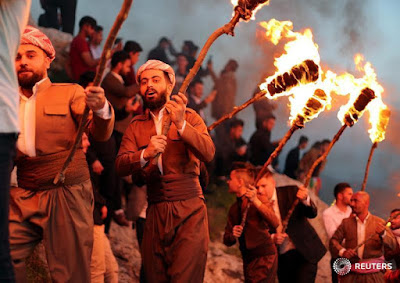 Iraqi Kurdish men carry fire torches as they celebrate Nowruz day, a festival marking the first day of spring and the New Year, in the town of Akra near Duhok, in Iraqi Kurdistan, Iraq March 20, 2019.   REUTERS/Ahmed Jadallah

Amr Abdallah Dalsh picture is a little quirky. I looked at it and - initially attracted to it and not quite sure why - discarded it and then looked again. The passenger, staring directly into the lens has the weary look of any commuter. We almost recognise him but in reality it’s that look we recognise and not the person. Compositionally, the image is chopped up into well-defined blocks of muted colour - reds, blues and greys, with strong horizontal and vertical lines. It takes a while to work out what is a reflection and what is not. 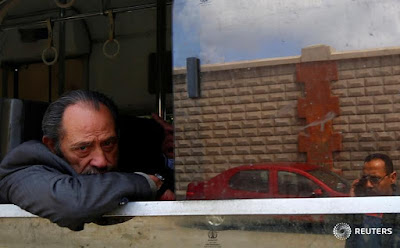 A man looks out of a window of an old electric tram in Alexandre, Egypt March 16, 2019.    REUTERS/Amr Abdallah Dalsh


This makes me smile, not only because of the playful use of scale by Amr Abdallah Dalsh, but because the cloud looks like the breath of the camel. It seems the man in the rear of the frame is standing well back as if he’s waiting for something to be over. You can see the rest of the camel racing story here – it’s quite fun. 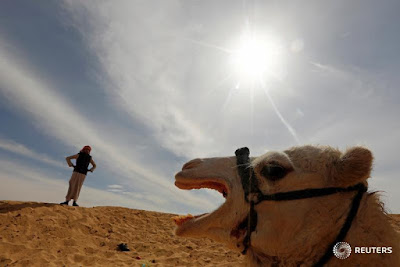 Mohamed Mostafa looks on during the opening of the 18th International Camel Racing Festival at the Sarabium desert in Ismailia, Egypt, March 12, 2019.   REUTERS/Amr Abdallah Dalsh