Sometimes apparently unconnected events turn out to be related in some abstract way, and they get me thinking. 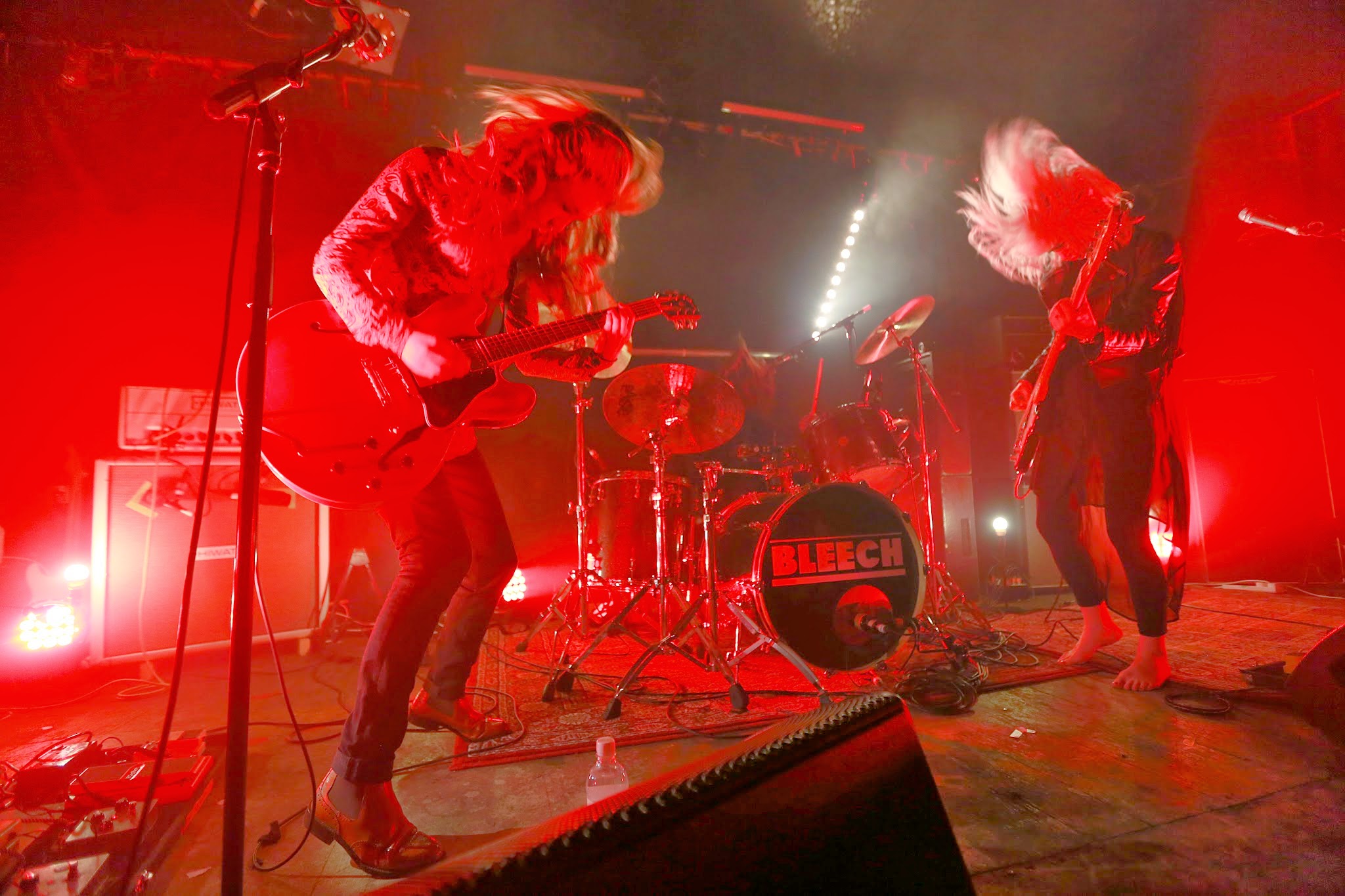 My friend Jennifer O’Neill, the guitarist with a young band named “Bleech” posted a picture on Facebook recently. It read: “a musician is someone who puts £5,000 worth of gear into a car worth £500 to drive 100 miles to earn £50.” It’s a sentiment many young photographers can also relate to in the changing landscape of professional news photography.

A catch-up drink with some of my (now retired) mentors, colleagues and competitors from the AP and UK national newspapers revealed stories of gloom and decline. A respected photographer was selling his gear to pursue a career in baking since news pictures could no longer provide a viable livelihood. We heard a tale of young photographers waiting to be assigned jobs, knowing that if their pictures did not get published they would not get paid, even if they had invested time and money to produce the images. And of course we heard predictions that media companies would soon start to drop some of their newswire services to cut costs.

The conclusion of the assembled group was that young photographers must misguidedly believe that by giving their work away for free now, they will get the big-paying jobs later on. Yet the group agreed that, in reality, if you give your pictures away now, no one will pay for them in the future – why would they?

It seemed like another echo of the music industry, where bands now find themselves needing to give their music away for nothing and then make money by selling T-shirts. There was much shaking of heads and another round of drinks was quickly ordered to wash away these dire thoughts.

It was all food for thought, and more than enough to get you down. But I’m not down because I have hope to offer. Here’s why.

At Reuters we are presently carrying out workshops with our photographers in the United States and South America about The Wider Image, the name for Reuters’ branded, long-form, storytelling photojournalism. We have already done the same thing in the Middle East and Africa, Europe and Asia.

Our goal is to explain how to balance the need for quality, breaking-news pictures with an increasing demand for more in-depth photography that will provide something “different”.  The results very quick and very rewarding - here is an example from this week, Jorge's Silva's look at the issues behind the conflict in Caracas, "Venezuela's skyscraper slum". 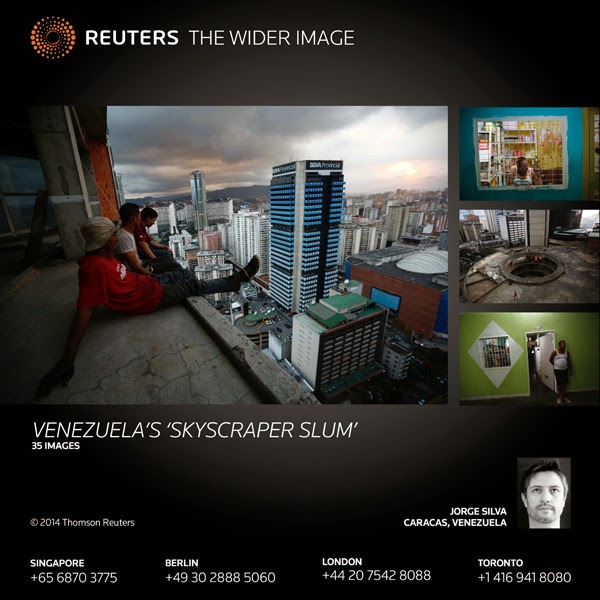 The message to the photographers is simple. We will continue to do what we always do – produce fast, accurate, unbiased breaking-news pictures covering all the top stories around the globe. But in addition we will explain visually and in-depth why that news is happening, producing stories that cannot be sourced for free from social media. Simple to say, harder to put into practice.

But here are some more recent examples to highlight the success of the strategy.

On March 17, the United Nations Human Rights Council in Geneva heard a report on human rights abuses in North Korea. The news picture of the day was the address by Michael Kirby, who led the inquiry, officially presenting the report. It also could have been images from Pyongyang (unlikely) or perhaps anti-North Korea demonstrations in Seoul. High-quality pictures of this sort are all on the wires, readily available, and are sometimes even available for free on social media – even if they are not of such high or trusted quality. 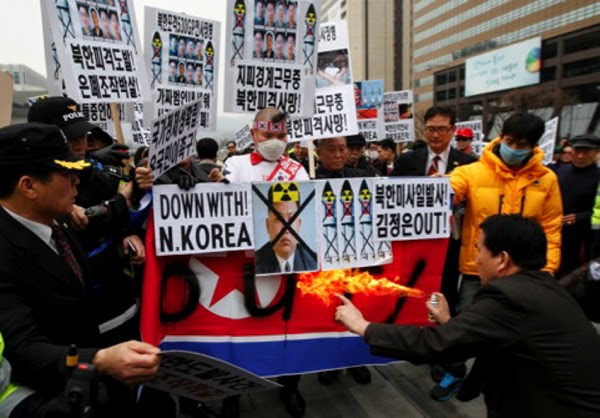 But to offer something different, Seoul-based photographer Kim Hong-ji spent time beforehand making contact with people who had been separated from their families during the Korean War, and who had recently seen their long-lost relatives again at a rare, inter-Korean family reunion that took place just north of the border.

Hong-ji asked them what their most precious memento was from their time in North Korea and produced a very moving series of portraits. The International New York Times dedicated just about all of page 2 to his images. 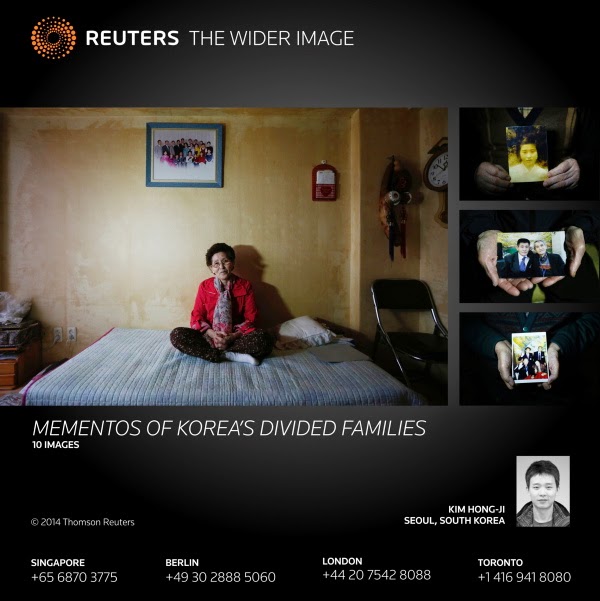 A second example is the Wider Image coverage of a regular annual event – International Women’s Day. Every year, the wires are alive with great pictures that celebrate women and highlight the struggles many of them face. Our competitors will of course also have good pictures to match ours.

This year, weeks before the event we planned and shot a series of portraits showing women with their daughters in countries around the world. We also asked them questions about their personal aspirations for their daughters’ futures.

The published results were nothing short of spectacular, and you can see the series here. 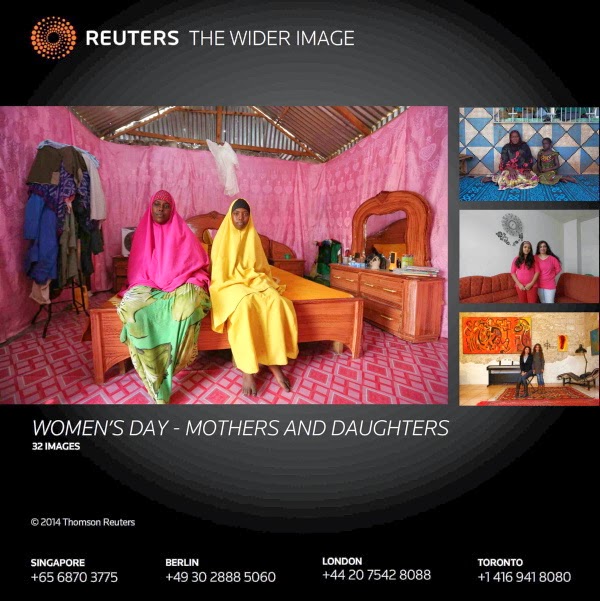 The last example, a personal favorite of mine, is from our photographers Feisal Omar and Omar Faruk in Mogadishu.

It not only demonstrates how our photographers in developing countries are now producing new and valuable pictures; it also goes a long way to demonstrating how we are reshaping and differentiating the file, preparing for an uncertain future.

The idea was developed after members of Somali militant group al-Shabaab attacked the Westgate shopping mall in Nairobi. Photographer Goran Tomasevic was quickly on the scene, and followed security forces into the building to produce a dramatic and awarding-winning set of breaking-news pictures.

Thinking ahead, we asked Feisal and Omar to shoot a picture story to show what the Somali capital Mogadishu was like for ordinary people living there.

The results were different from the normal news pictures of Mogadishu, showing bomb-blast aftermaths and shootings, where the only colors are provided by either flames or blood and the subjects are often ignored by the world’s media. 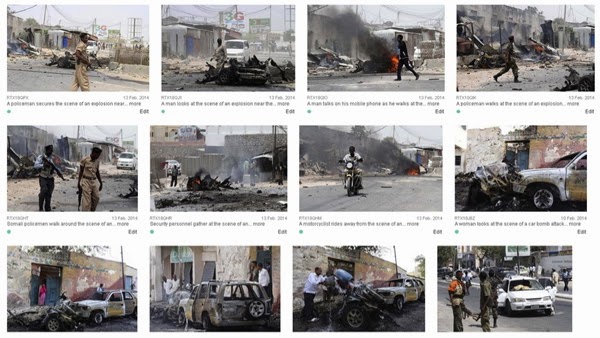 Here is the Wider Image look at Mogadishu, a series of pictures that published globally.

The biggest surprise for me was seeing the iconic symbol of all things USA – Mickey Mouse – at a child-care centre. The sequence of pictures revealed an equally unexpected splash of colour and normality from a part of the world that many think of as grey and shaped only by disaster, violence and bloodshed. 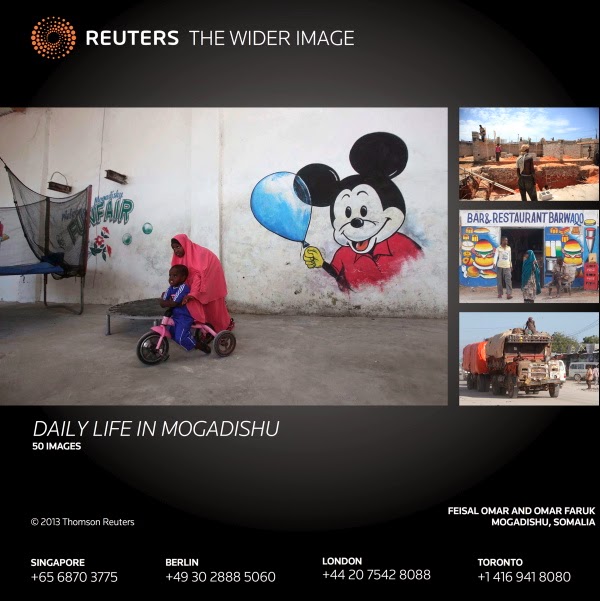 Working for a large and complex organisation, it is sometimes easy to forget a golden rule in business – if your competitors produce the same product as you but faster and cheaper, you will eventually lose custom. The end result of this shortsightedness is no revenue, no business and no paid professional photographers.

But I am confident that this won’t happen because I am inspired by the creativity and hard work of the likes of Hong-ji, Fiesal and Omar and the global team who produced the International Women’s Day project.

This confidence is further underlined by the impact these stories have on global publications, and the firm knowledge that the same photographers who produced them will compete daily to win breaking-news stories. They are true photojournalists who are looking forward and not lamenting the past.

At the end of the day, what will always sell is quality and integrity. If you combine that with creative storytelling that genuinely interests people, you will have a secure future.

We are living in an increasingly visual world full of opportunity for photographers with new ideas. The situation is not the same as it is for the music industry. As it stands now, professional photographers don’t sell T-shirts, they sell pictures.

If you work for Reuters, The Wider Image team would like to hear your ideas. If we think the stories are relevant to Reuters top news, visually rich and exclusive, we will pay you to shoot them. Good luck.
Posted by Cropperboyce at 20:10 No comments: