A Week in Pictures Middle East and Africa November 23, 2018

This surreal picture from Mike Hutchings has caught my eye. No matter how hard you look at it you have no idea what is going on until you read the story. Why is the dog being thrown out of the hole? What is the man doing? And why is the hole in the middle of nowhere – you can see an empty landscape to the far horizon. If this isn’t a ‘click on picture to find out more’ I don’t know what is. 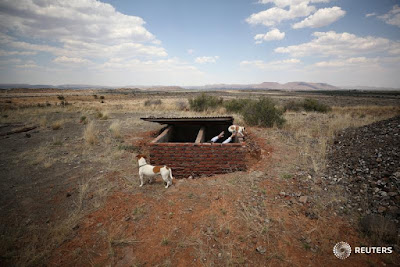 It’s all in the detail. Take a minute to look at the position and timing of all the feet and hands in Muhammad Hamad’s arrival picture. Heels just about to touch red carpet, toes pointing up, each stride a perfect inverted V shape. All this left-to-right movement is countered by the figure on the right reaching out left, with all this captured at the moment when Jordan’s King Abdullah looks up and across to his guest. 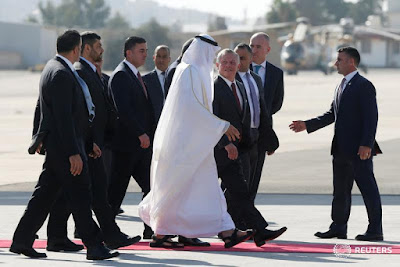 A picture of a fishermen casting his net should conjure up thoughts of calm open spaces set in a beautiful seascape. Not so in Thierry Gouegnon’s picture. Even though the moment of casting is beautifully captured, the figures’ reflection is unbroken on the water and the boats are perfectly placed, the image is one of ugliness. A tide of plastic waste reaches up to engulf the fishermen, the grey skies appear heavy with pollution, squeezing the men into a sliver of grey water that seems to be covered with a film of filth and oil. 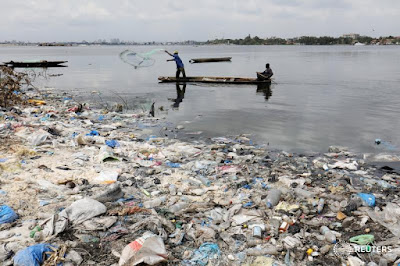 Men fish in water just off from a shore line covered in plastic items and other debris in Abidjan, Ivory Coast November 21, 2018.   REUTERS/Thierry Gouegnon

Ammar Awad’s picture is a slow burn, easily overlooked. It’s so busy, with harsh and unforgiving light, that your eye darts about looking for a resting place. But I think that is its strength as you slowly come to realise, through the sea of faces, that it’s a picture of a band playing. Through the visual whirl and heat you begin to hear the instruments: clash clash clash of the cymbals, ting, ting, ting of the percussion instruments on the right, and finally the blare of trumpets. I also have to mention the saluting face on the right, cropped in half – love it. 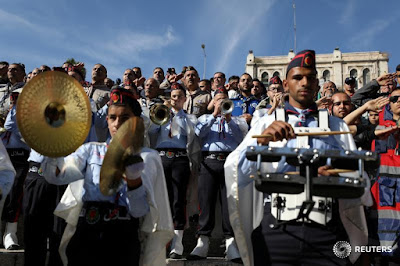 Musicians play music during a ceremony to celebrate Prophet Mohammad’s birth anniversary on the compound known to Muslims as Noble Sanctuary and to Jews as temple Mount in the Old City of Jerusalem November 20, 2018.   REUTERS/Ammar Awad

This is one of those weeks when many of the images from the region are complex in their shape and design and don’t jump easily into my page. As an antidote to that I include Amr Abdallah Dalsh’s picture for its simplicity and strength of graphic shape. 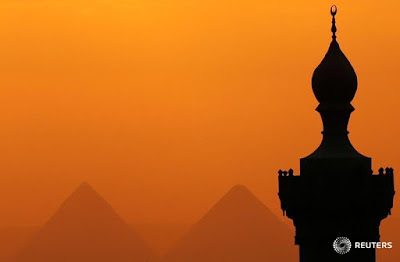 The sun sets on the minarets and the Great Pyramids of Giza in old Cairo, Egypt November 19, 2018.   REUTERS/Amr Abdallah Dalsh

For a moment captured it would be hard to beat Amr Abdallah Dalsh’s picture of a falcon catching a hare. True it was shot at an exhibition of falconry, so hardly a moment frozen in the wild. But by being lucky or good, Amr has for sure got the moment. Claws just about to start digging, the falcon’s eyes are focused on its running prey. The hare, its ears still pricked up, is not quite aware that it has been caught. All shot in front of a clean background. I’d like to think that this is all part of the show and the hare is returned to its cage to run another day. But I suspect not and it is just another meal. 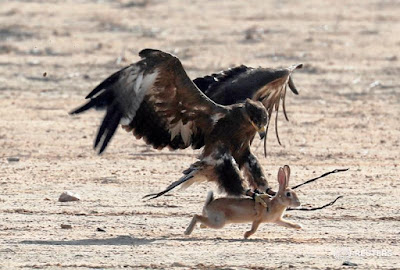 A hunting falcon catches a hare during a celebration by Egyptian clubs and austringers on World Falconry Day at Borg al-Arab desert in Alexandria, Egypt, November 17, 2018.   REUTERS/Amr Abdullah Dalsh

Posted by Cropperboyce at 12:19 No comments:

A Week in Pictures Middle East and Africa November 16, 2018

Again the thorny ethical issue of using pictures of dead children has come to the fore. Mohamed al-Sayaghi was present at the hospital when tiny Hajar died of malnutrition in Yemen, a story that must be told while respecting the feelings of the parents. Permission was granted to take photographs. Mohamed had stark images of the doctor carrying away the child’s limp, dead body but editors decided these were just too brutal to move to the network. Aware of this potential concern when photographing, Mohamed carefully shifted focus from the body to the child’s mother in the background, so we are spared the sight of a dead child but starkly aware of the sadness of this death. I have also included the tender image of Hajar’s father gently holding her tiny and emaciated hand, an image that makes sadness well up in me. You can see the whole story here but please be aware it’s distressing. 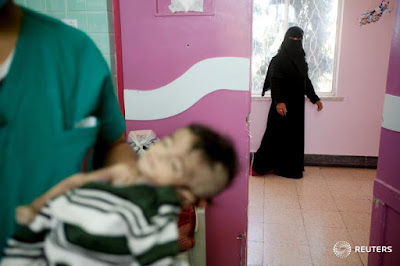 The mother of four-month-old Hajar Saleh Hassan al-Faqeh, who died at the malnutrition ward of al-Sabeen hospital, walks by as a nurse holds her daughter’s body in Sanaa, Yemen November 15, 2018.   REUTERS/Mohamed al-Sayaghi 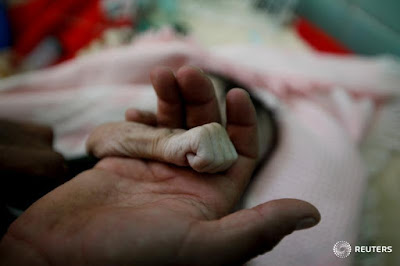 Amir Cohen’s picture of lightning has a visual feel of a painting created by the slow shutter speed combined with the slow movement of the waves. Adding to this sense of a painting are the complementary colours of the purple and yellow: the Impressionists often closely juxtaposed these colours. Throw in the jagged hard lines of the strike and you have the enjoyable contrast of the soft movements of shape and colour contrasted with the hard lines. Wonderful. 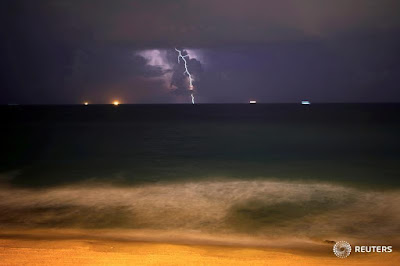 Lightning strikes over the Mediterranean Sea during a rain storm near the city of Ashkelon, Israel, November 14, 2018.    REUTERS/Amir Cohen


What catches my eye in Faisal Al Nasser’s picture is the warm colour of the woman’s face set against the cool tones and monochromatic backdrop of the poster of the Saudi Crown Prince and the circular swirl of its design. I love the compositional curve in the picture that takes you around from the eyes and the line of the Crown Prince’s beard through the line of the arm and hand holding the mobile phone into the face of the woman posing for the picture. 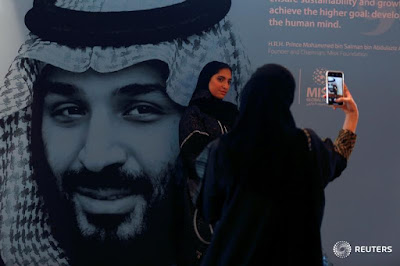 
A very clever use of scale by Muhammad Hamed turns a security picture into something a little more special. Do we need to keep the top of the helmet of the security officer in the foreground in the frame? I think not. The careful crop keeps your eye contained and squeezed into the frame to look at the tiny figure set against a clean background. His raised arms provide enough visual interest to keep the viewer busy with this open spaced and bold image. 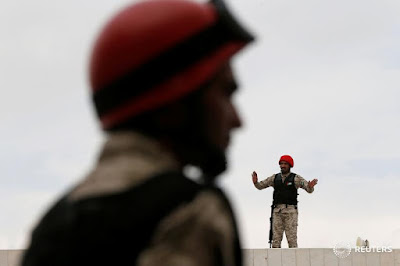 Jordanian security personnel stand guard during the trial of those accused of staging an attack on December 2016 on a Crusader castle in Karak, at the State security court in Amman, Jordan November 13, 2018.   REUTERS/Muhammad Hamad

Harsh light, strong shadows creating flat shapes and abstract lines all make for a powerful picture by Ronen Zvulun of the pock holes of shrapnel after a missile attack. The flat ‘cut out’ figures give us a sense of scale. Would I have cropped off the blue sky and greenery on the top of the frame? Yes I would, to ensure the image is completely devoid of any colour, reminding me of the importance of subtle cropping. But now I am nit-picking a picture that already works very well. 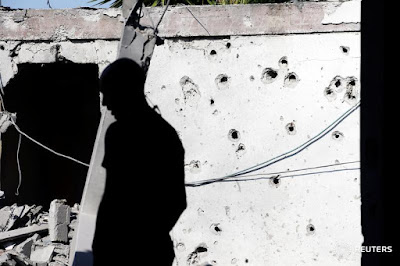 A man is silhouetted as he stands near a house damaged by a rocket fired from the Gaza strip, in the Israeli city of Ashkelon, November 13, 2018.    REUTERS/Ronen Zvulun


When a politician makes a bold move there is often no stronger image than a direct eye contact portrait and this is never truer than in Ammar Awad's powerful press conference portrait. It never ceases to amaze me how you are drawn to the eyes in such pictures. So why not recrop and make that the key element of the image? Everything else is superfluous. 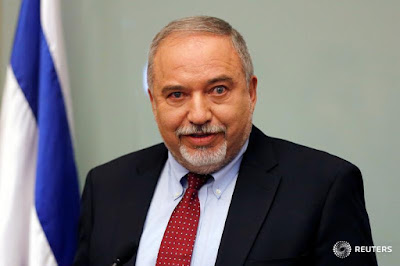 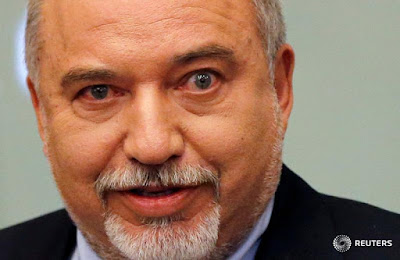 
Although Thomas Mukoya’s picture was shot in February 2016 it was only moved this week and therefore qualifies for week in pictures. I can never resist pictures of objects that are seen out of context such as boats on hills or cars in swimming pools so to see a pile of military hardware stacked up and rusting away is a sure pick. Simple in its composition, no distraction of figures or bright colours: your eye just wanders over the tangled mess. 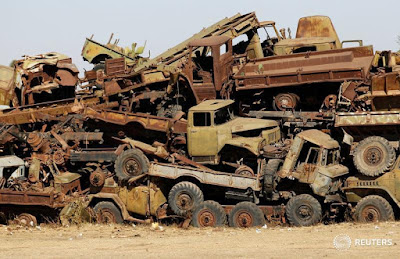 Piles of rusted soviet-era tanks and military equipment are seen at the ‘tank graveyard’ in Asmara, Eritrea February 21, 2016.   REUTERS/Thomas Mukoya

A powerful explosion as Hamas TV station is destroyed was captured by Ahmed Zakot in this terrific image. Not only can you see the scale of the blast by looking at the size of the windows lit up by the flames but it’s worth considering the circumstances around taking this picture. Imagine waiting on a rooftop of a building in Gaza in total darkness listening to warplanes and exchange of missiles flying overhead, waiting for an explosion and ensuring that you get timing, framing and exposure all correct. Even though targeted building were warned beforehand you would also be hoping that it’s not your building that is targeted, or a building so close that, even though you are taking all possible precautions, you are peppered with shrapnel. Read on here 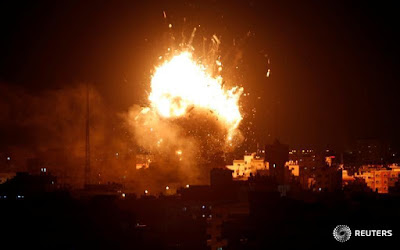 An explosion is seen during an Israeli air strike on Hamas’s television station in Gaza City November 12, 2018.    REUTERS/Ahmed Zakot

Posted by Cropperboyce at 15:59 No comments: