A very gentle and poignant moment captured by Nir Elias as Jona Laks, a survivor from the Holocaust, is hugged in Auschwitz. The tones and colours are muted and we are aware, by the low position in the frame of the people hugging that the background is equally important, your eye slowly drifting away from the emotion of their gesture to the number 10. Once we read the caption we know why. Read on here for Jona Laks story. 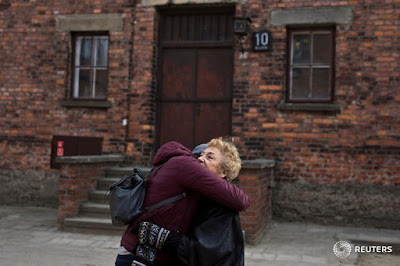 Jona laks, survivor of Dr. Josef Mengele’s twins experiments and her grand-daughter Lee Aldar hug in front of the block number 10 which served as Mengele’s laboratory, as they visit the Auschwitz death camp in Oswiecim, Poland January 26, 2020.   REUTERS/Nir Elias

A detail picture within a detail picture very cleverly observed and shot by Aziz Taher. At first you are drawn to the reds and whites of the well-groomed and aged hand set against the cold green and blacks background of the solder. And at first glance it looks like a gentle moment of restraint. But look closely at the motif on the ring – defiance. 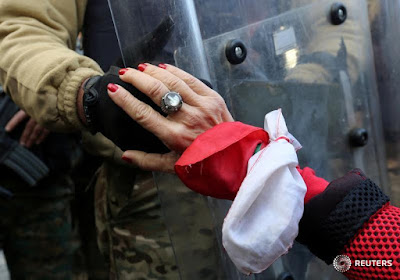 A protester holds the hand of a Lebanese soldier during a protest against the political elite in Beirut, Lebanon, January 27, 2020.   REUTERS/Aziz Taher

Crowds leaning in to see a worker unearth a mass grave may seem somewhat ghoulish.  It makes for a way of illustrating the story without showing the horror. But readers are on the whole no different from those peering into the earth trying to get a glimpse of a corpse. Evrard Ngendakumana provided images that satisfy those who want to look and those who don’t. For those who do want to see, he photographed an unearthed skull being carefully tended by a worker wearing gloves, which I think softens the harshness of the image. Read on here 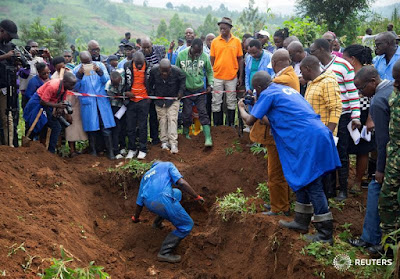 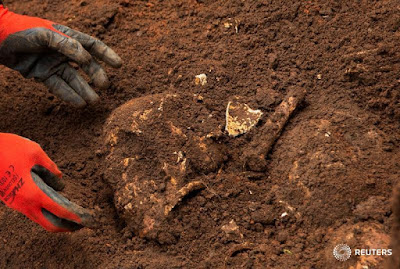 A Burundian worker from the Truth and Reconciliation Commission extracts a skull from a mass grave in Bukirasazi Hill in Karusi Province, Burundi, January 27, 2020.  REUTERS/Evrard Ngendakumana

Amr Abdallah Dalsh has succeeded in giving us the feeling that you are in the middle of the claustrophobic heat and noise of an Egyptian football match with his slow motion image. It’s not so slow that everyone blurs to abstraction or so fast that it’s frozen and static. 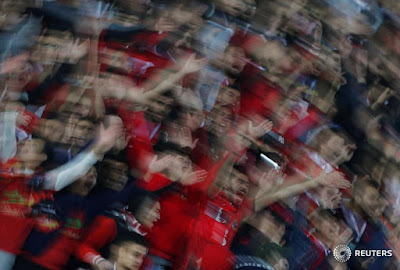 I can’t help but be attracted to the action in Abdullah Dhiaa al-Deen’s picture from clashes in Iraq. I love the backlight casting confused shadows on the road from the near silhouetted figure and I am not distracted by the lamp post and cables in the background, which I be would on most occasions, as they provide a sharp cold edge alongside the buildings. Would I have cropped the half figure on the left out of the frame? For sure, but I do like the vividness of the tear gas-filled space the protester is running into. 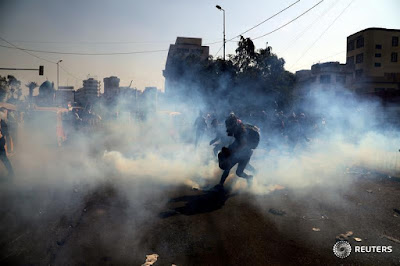 If you like red, you’ll love this. What you should also like in Zohra Bensemra’s picture is the compositional rush from left to right and the perfect timing where the leaders’ heads and chests remain in the light, their suits falling into shadow. And this all perfectly balanced against the guardsman in the foreground. Does he get in the way? Not really, as he’s in shadow and the highlight takes your eyes straight to the leaders’ faces a second before they too are plunged into shadow and the moment, captured by Zohra, is lost forever. 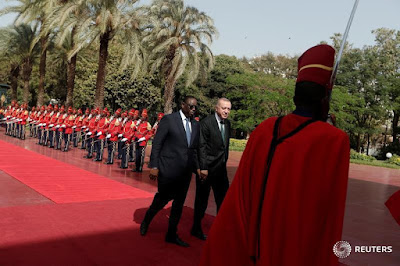 Raneen Sawafta’s picture is messy. The background is busy, the atmosphere is full of dust giving it a murky feel, the figure in the centre of the picture is not central to the action and therefore your eye jumps about in the chaos of the scene. But suddenly you see the man on the left’s finger and his eye line. You follow that line to the soldier on the right and see the open mouth and then the gun, pointing back at the man. The circle is complete and you no longer see the chaos and the dust or hear the shouting: you are just fixated on the interplay of these two people. Your imagination runs wild with dialogue. Read on here 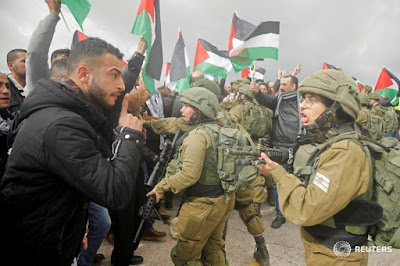 The exhaustion really comes across to me in Yamam al Shaar’s picture from Syria. Even though it’s another victory for Assad’s forces as they take control of a destroyed town, the body language in the soldier walking away within a devastated cityscape makes me sad. Not quite sure why this feeling is so powerful to me, maybe it’s the sight tilt of the head, the limp food bag or just the overall sense that this scene could be ordinary - someone walking with their lunch – but isn’t because it is set in a cityscape of destruction. Read on here 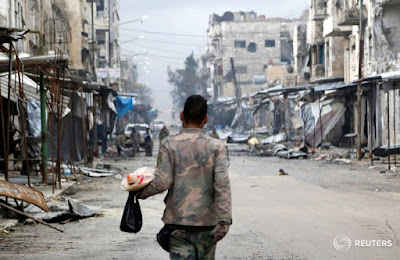 A Syrian army soldier carries food as he walks through the streets of Maraat al-Numan, Syria January 30, 2020.    REUTERS/Yamam al Shaar

Repetition of shape and line in Mohammed Salem’s image makes for a very graphic composition. Add to that the strong side light, the shaven heads and the open mouths shouting slogans and we are left in no doubt this is military training. 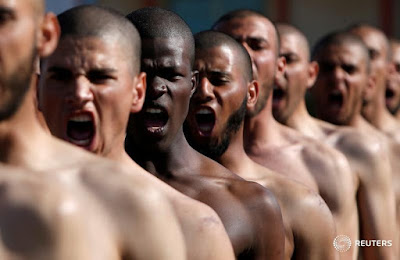 Palestinian police recruits loyal to Hamas shout slogans as they demonstrate their skills during a training session at a police academy in Gaza City January 30, 2020.   REUTERS/Mohammed Salem

Posted by Cropperboyce at 21:34 No comments:

Baz Ratners’ picture is made up of a wonderful graphic shapes and line all set against striking colour. I love the bleached words that are almost impossible to read. The centre of the image can be digested very quickly, an old railway sign set against an African landscape. But before you move on thinking, okay get it, take a few seconds to search for the boy with the umbrella, if you didn’t already see him. What a delightful visual addition to the image which, on reflection may make you think, okay maybe I don’t get it. If you want to know more read on here for the story published this week that took months to shoot. 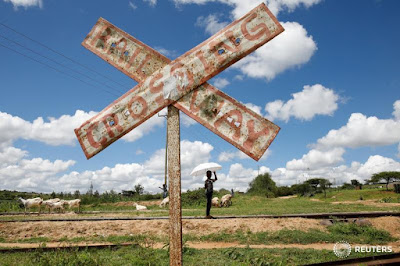 A child holds an umbrella as he stands on the SGR railway tracks near the town of Kiu, south of Nairobi, Kenya, December 16, 2019.    REUTERS/Baz Ratner

Mohamed Azakir’s picture has the feel of a classic picture of a lone Olympic athlete in action, bright colours of red, the wet ground adding shimmer to the light as if in a stadium. But the action - frozen at its peak in front of a crowd - is the only similarity to this momentary illusion. In reality it’s a protester hurling a tear gas canister back at police. 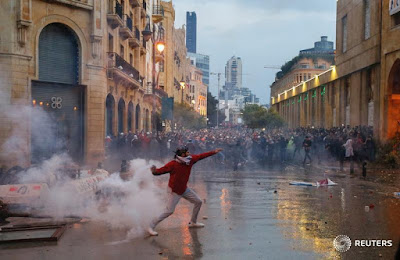 A demonstrator throws a tear gas canister during a protest against the ruling elite who protesters accuse of steering Lebanon towards economic crisis in Beirut, Lebanon January 18, 2020.   REUTERS/Mohamed Azakir

It’s the neon glow of light blurred with a mix of smoke and driving rain that gives the impression of a city on fire in Aziz Taher’s striking picture. I get an immediate feeling of acute tension as a mass of soldiers head off into the distance. This visual movement is countered by the lone figure set against the yellow arches running in the opposite direction. Looking at this picture I want to know, what happened next? 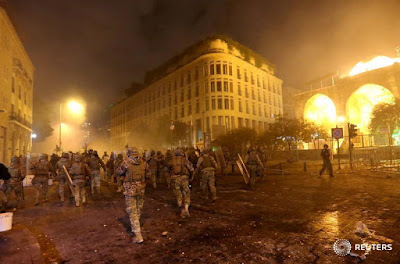 Powerful, brutal, frightening and desperate are all words that can describe Khalid al-Mousily’s picture from the clashes in Iraq. It’s not often I will post a picture of a bloodied corpse but it’s the action around the body, rather than the body itself that creates the power of the image. I feel this emanates strength through what you can’t quite see. It takes a while to see the bloodied face even though the composition of the image directs you it. The men on the wall left and right looking down at the action, the figures below the wall forming a dark pyramid, at the centre of which is the dead man’s face - which you are led to from the line formed by the foot and leg. And once you have seen it and want to look away, the man at bottom right who holds a mobile phone pushes your eye back to the ugly centre. Read on here for Khalid’s back story. 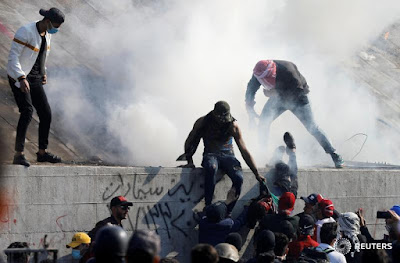 Raneen Sawafta has used a clever reflection to turn an ordinary scene in flat low light to create an image with a spiritual and musical feel. Even the rhythm of the dark fence posts adds to the sense of dance as the pilgrims, holding hands, move from left to right. 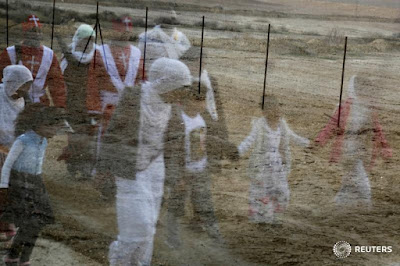 Pilgrims are reflected in a car window as they make their way towards the Jordan River to participate in a baptism ceremony, near Jericho in the Israeli-occupied west bank January 18, 2020.   REUTERS/Raneen Sawafta

Rice price inflation in Nigeria doesn’t really set the pulse racing in terms of potential for news images but this important story needed to be illustrated. Afolabi Sotunde has shot the story very thoughtfully and I am a great fan of a detail picture when cleverly used to illustrate a complex story. A sliver of light pointing down to the small grains of rice does the job perfectly. If rice prices in Nigeria does get your pulse racing read on here, the pictures are worth the time. 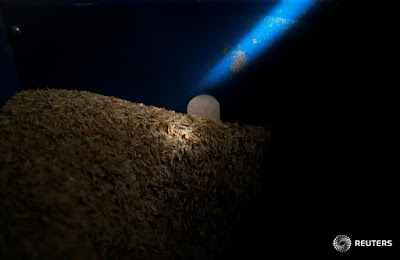 Paddy rice grains are seen in a machine before processing at the Wurukum Rice Mill in Makuerdi, Nigeria December 2, 2019.   REUTERS/Afolabi Sotunde


An interesting debate to be had about giving offense and reporting fairly what is seen. After a call for a million people to join an anti-U.S. protest in Iraq, many protesters have taken the time to make anti-U.S. banners, posters and even mock gallows, giving Alaa al-Marjani this slight ethical conundrum. What is needed for fair presentation is a variety of images in the file and to photograph what is seen, being careful not to isolate images that are not representative of what is really going on. 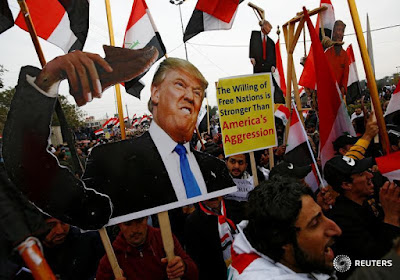 The commemorations to mark the 75th anniversary of the liberation of concentration camps at the World Holocaust Forum produced a tsunami of images as 40 heads of state descended on Jerusalem, some of who also visited the Palestinian Territories. At the end of day it was reported that details of the U.S. peace plan for the Middle East would be announced. So Ammar Awad’s image of the arrival of Vice President Mike Pence quickly changed from being just another arrival image to one of the day’s key images as the news focus shifted. 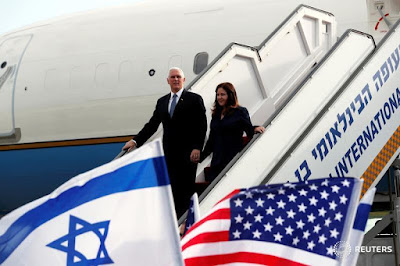 U.S Vice President Mike Pence and his wife Karen disembark from a plane upon their arrival at Ben Gurion international Airport to attend the World Holocaust Forum at the Yad Vashem memorial centre, near Tel Aviv, Israel January 23, 2020.   REUTERS/Ammar Awad

Posted by Cropperboyce at 18:27 No comments: