Saturday November 13, 2021 was a rather special day. Almost exactly a year to the day of being told that I was to be made redundant from a job I loved, I was out taking pictures on a story I had thought about for years but never got around to do. And just as importantly I knew why I was doing it. I have discovered, the passion I have for pictures and story-telling is no less diminished.

I shot twelve frames on a Rollieflex 75mm F3.5 using HP5. The film I processed myself, my love hate relationship with the smell of ID11 and fixative revisited. The negatives scanned on an Epson V600.  Here is the contact sheet, frame one, bottom left, frame 12 top right. 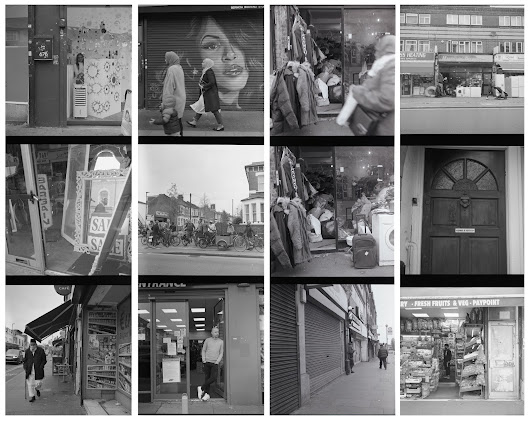 I will be the first to admit that none of the images are earth shatteringly wonderful, but the exposure is even, the composition and timing not bad. But actually, what is more important is how I arrived at this point – shooting black and white on a vintage medium format camera. I will wind my year back to explain.

But first, my favourite image is frame two. The man wearing headphones reflected in two mirrors, I like the busy lines criss-crossing through the picture, one of which, the reflection of the padlock, points to the figure, giving the image a focal point despite the words ‘Bargain’ and ‘Sale’ fighting for attention. 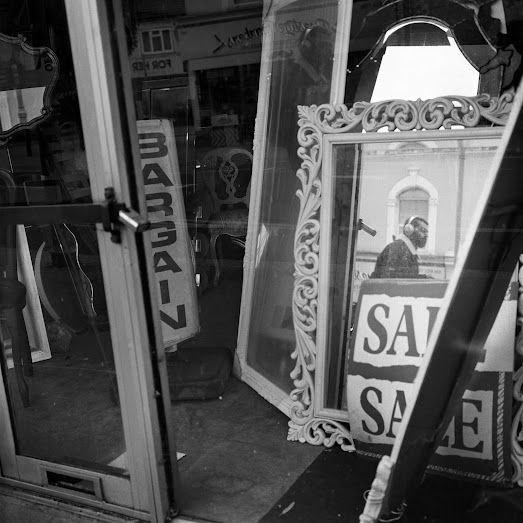 After attending a Zoom call in February 2021 titled ‘Out of the Archives. Collecting Stories of Everyday Life’ hosted by Four Corners I spent weeks scanning 35mm black and white negatives I shot in 1985 that had been gathering dust in my attic. I was encouraged by Lisa der Weduwe from the Museum of Youth Culture (MOYC), who addressed the call, to scan them. We were all in lockdown so why not? I am very happy with the result, about 150 pictures of Newtown Youth culture published and archived by the MOYC. If you click here or on the picture below you can see them all. I’m also in talks to have an exhibition of these pictures in Peterborough, but that’s another story, and quite exciting. 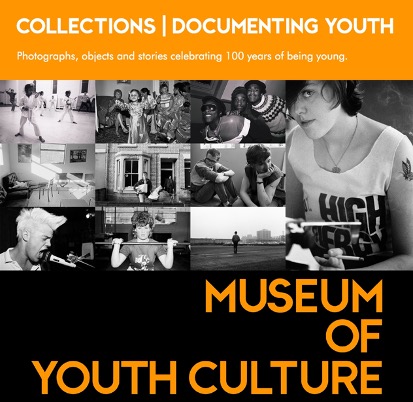 Cleaning, scanning and removing 36 years of dust from negatives is a rather time consuming and solitary task. Although it was quite exciting to see what a wonderful archive I had, I was, in essence, looking backwards. All my yesterdays, I asked myself was I hiding?

Britain was in full lockdown so shooting pictures of people wasn’t easy. Maybe everybody was hiding? I would go for a daily walk around local parkland to get some exercise and clear my head. The lockdown rules permitted you to walk with one other person but at a 2m distance. I noticed, as I walked past others, I’d catch a snippet of their conversation. To start to regain my confidence photographing people I decided that I’d shoot a series of portraits of fellow walkers and include what I’d overheard in the caption, I called it 'Overheard in Lockdown'. I was amazed that only one person refused to be photographed and be included in the project. The pictures are simple environmental portraits, the background determined by where my path crossed with other walkers. It was fun and I had great conversations with total strangers. I think it’s a timely document, prior to the UK’s four-step roadmap out of lockdown, that’s hopefully never to be repeated. Click here or on the picture below to see the full set. 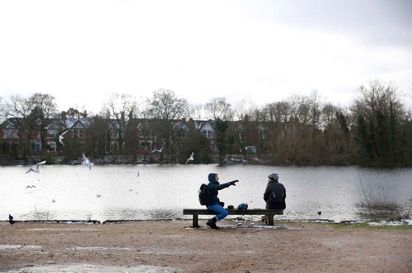 While sorting out the Newtown Youth negatives, I came across another small project I shot in 1985. In short, I photographed everyone who knocked on my door.  Spurred on by the success of the ‘Overheard in Lockdown’ project I decided that I’d try to track down these people 36 years later and re-photograph them on their doorstep. With the help of the local paper and the easing of lockdown I managed to find a few. The local response was heart-warming and when I did meet up with my subjects, reshooting them and giving them prints was a major confidence boost. You can see the whole series here. 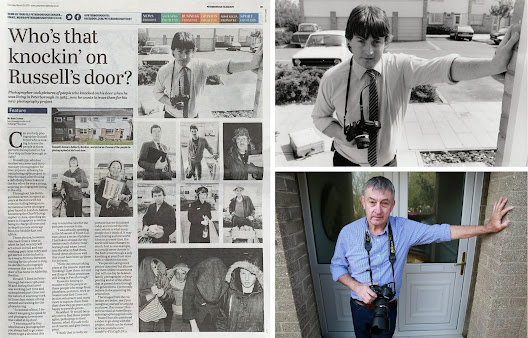 I have always been fascinated by change, but change that is imperceivable until you look at it retrospectively. The corner shop that is always open until it’s no longer there, the aged owner passed on or moved away. The three old men sitting on the same seats in the pub sipping at their pints every night that for years were part of the furniture who are now no longer there; or that old factory building or row of terraced houses that is now a new mini store or block of flats. The slow decline or the gentrification of an area as the populous slowly changes, to me, is a rich area for social documentary. London is a constantly changing, hundreds of years of migration, growth and change. I want to capture London now, not the usual landmarks, high life, low life and razzamatazz that gets the attention but the imperceivable changes in ‘ordinary’ London, like a river slowly changing its banks and course over the years.

To me the Lea Bridge Road (A104) is such a place. It runs between Hackney and Waltham Forest, through Leyton. It was named after a bridge that was built over the River Lea in 1745. Over the years I have spent hours stuck in slowly chugging traffic looking out of my window watching life go by. I have decided to photograph people and places along the length of this road. To me it encapsulates the unseen changes that London is going through, people, commerce, leisure, faith and architecture. My ambition is to capture the everyday ordinariness today that in the future will be so special as it will no longer exist.

Long gone are the halcyon days when you can go into a pub, factory or institution, ask the boss if you can take pictures and they’d decide yes or no within minutes. For example, for me to photograph the Woolwich Ferry it took over a year to get all the permission I needed. But to me it was well worth the time spent. 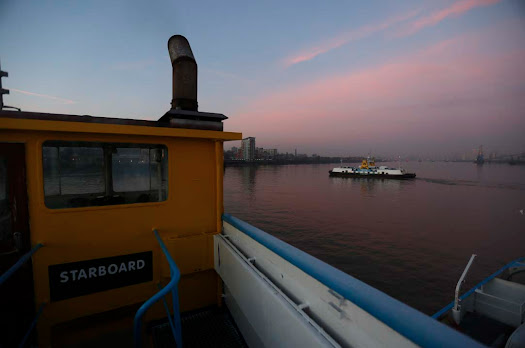 The Woolwich ferry story is a good example of what I am trying to achieve. The three boats that I photographed in 2015 and had been crossing the Thames since the 1960’s are now no longer in service, forever gone. Most of the staff, retired.

Also, a question that troubled me was technically how to photograph the Lea Bridge Road? I could dust off my Nikon FM2, click in my trusty 35mm, wind on a roll of HP5 and push it two stops and wear a keffiyeh as a neck scarf. But wasn’t that what I did in 1985, all my yesterdays? I could use my Canon 5D that will produce technically wonderful images in low light. As a news photographer, editor and manager I have always advocated the use of colour, pure commercial sense once the business had changed to full colour, especially with online digital. But, the perception of most is that people who produce 35mm cameras with no apparent good reason, such as a wedding, are predators and up to no good. It would be hard to integrate into the community of the Lea Bridge Road with continual cries of ‘What you taking pictures of?” Or ‘Oi paparazzi’ or even as I was once told when shooting a simple feature ‘If you took my picture, I will ram that camera up your arse!’  As a side note I assured this gentleman that I did not take his picture and was able to safely return my camera into a bag.

These days people tend to be suspicious of photographers.

A chance conversation with a friend provided the answer. He told me casually that he was being given a Rollieflex and would need to learn how to use it. This was the solution I was looking for.

First, the new visual challenge of composing in a square format, with the added complexity of everything being back to front was very appealing. Secondly, focussing manually, no motor drives and only having twelves frames per roll of film all restrictions that, I believe, leads to more creative thinking. Another friend wisely said to me recently when I asked him why use black and white film when digital colour is so perfect, ‘the perfection and beauty of using black and white film are the small imperfections it throws up’. I was sold.

So after two bad online shopping experiences trying to get the right camera I bought a wonderful camera from Robert at the Vintage & Classic Camera Company. Not cheap, but excellent condition and fully working. The last thing I wanted to do was struggle with the mechanics of a camera when I was struggling with everything else involved in taking pictures. 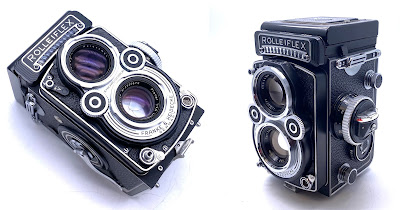 Once purchased I then had to learn how to use it. I quickly discovered that I needed more time than I imagined. After a few rolls of the long-suffering family and a few frames of the neighbours I decided to put the Lea Bridge Road project on hold and embark on something a little easier. Today, I shot the final picture of this sidebar project that I started in June 2021. Although I see this project very much as a learning curve, that I will share once complete, it has been amazingly rewarding shooting it.

What I have gained by taking my time is the confidence to actually start my Lea Bridge Road project, which brings me back to the beginning of my post. Using the Rollieflex has intrigued people enough to ask me what I am doing when they see me on the street. On the first day of shooting, two people who had cycled past, stopped and returned to talk to me about the camera and what I was doing. I am not a threat.

I am also learning a new way to look as I take pictures. People allowed me stand for ages waiting for shapes and lines to change as they carried on with what-ever they were doing. I think it’s about eye contact, I can look down at the camera to compose and focus, then look up to engage with what or who I am photographing, something that had never occurred to me. Luke below for example described himself being in another world as he took a break from work and ignored me as I waited for him to mentally drift back to this other world. 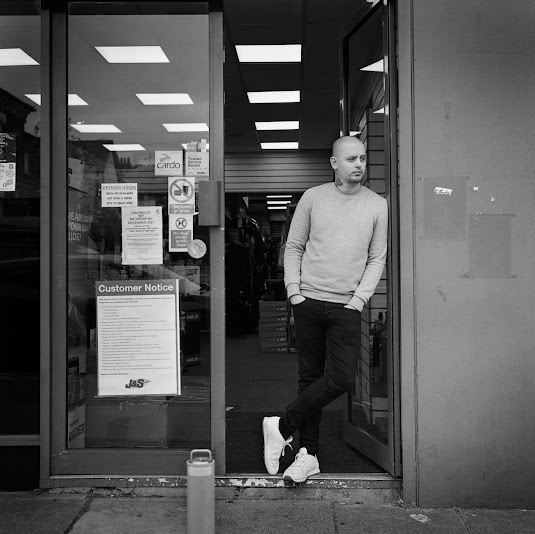 Once the dialogue is started, I feel that people come to believe that photographers, are people who can be trusted. Especially when they return with a nice print.

I will continue shooting pictures on the Lea Bridge Road and update this post when I have more to offer.

Posted by Cropperboyce at 14:52 No comments: