By the look on the faces of the people on the edges of in Olivia Acland’s picture, they are
all thinking about the conversation between the two central figures must have had before
attending the election rally. “I’ve got a good idea. Let’s get naked except for our
underwear and long coloured socks, paint our bodies white and red and go to the rally.” It
seems that no-one else got the mail with the dress code in it. A wonderful bizarre moment
and all respect from me for the individuality on display. 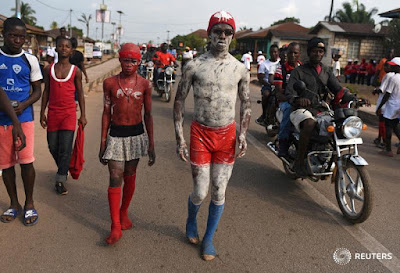 Supporters of the ruling All Peoples Congress (APC) party arrive to attend a rally ahead of the March 7 presidential election in Makeni, Sierra Leone March 5, 2018. REUTERS/Olivia Acland

Mohamed Abd El Ghany captures a protesting soccer fan in mid-stride, holding a flare aloft and looking like an Olympic torch bearer. What I really like about this picture is the clean design. Yes, it could be said that he got lucky: there are no other people to complicate the scene, the background figures seem to run along with him, and the curl of smoke is perfect. What is important is that the figure is at full stretch with his arms raised. You need to be both lucky and good to capture this. 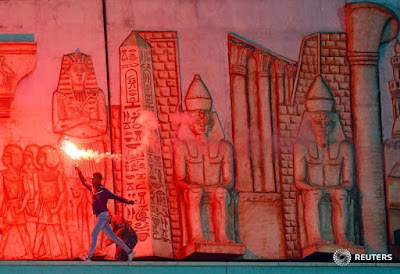 Photographer Bassam Khabieh is trapped in Douma, eastern Ghouta, and when he considers it safe enough he files pictures of the latest news. Today, a Syrian Arab Red Crescent aid relief convoy arrived with much-needed emergency supplies.  What to me is so striking about this picture is the sombre mood. All colour is drained from the image, even the reds of the crescent logos. There are no crowds, no children, just trucks being watched moving slowly through destroyed buildings. 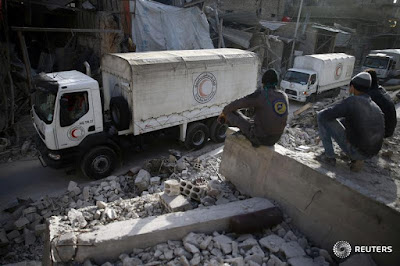 I can’t help feeling a little sad at the size of the task facing the soldier clearing mines in Aziz El Yaakoubi’s picture. The flat, featureless landscape seems to stretch to infinity. This space, and the danger of the task, have been cleverly accentuated by the heavy crop of the second soldier, who wisely seems to be keeping well away 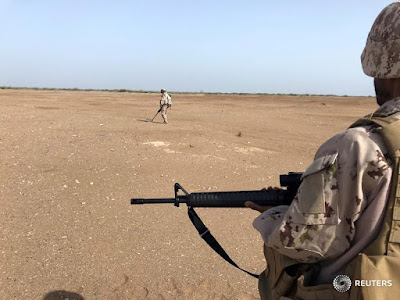 What makes Anne Mimault’s picture a pick for the week is the powerful graphic shape of the man digging a grave in a fog of yellow dust that seems to be reaching up to choke the onlookers. The man on the left is casually looking back at the hard work being carried out, while at the same time the shape of his body frames the image. 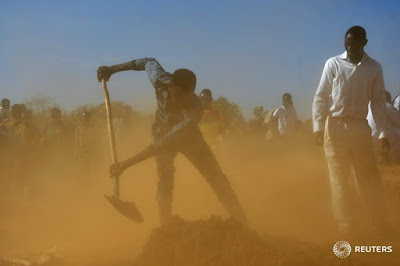 People take part in a burial ceremony of the armed forces members who were killed during Friday's attack by Islamist militants in the capital Ouagadougou, Burkina Faso March 7, 2018. REUTERS/Anne Mimault

The strong shadows in Hayam Adel’s dark portrait cut across the picture in a complex abstract composition and almost hide Esraa from view. The sombre mood echoes Egypt’s struggle to end FGM. The full, powerful story published on International Women’s Day can be seen here 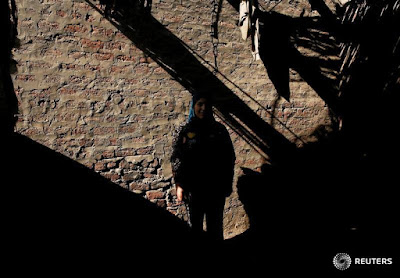 An affectionate picture by Faisal al-Nasser, taken early on International Women’s Day in Saudi Arabia. I can’t help but wonder what is going through the man’s mind as a group of women jog past his shop. The back story here is that Faisal took over this assignment from our Saudi Arabian woman photographer, Reem Baeshen, who was sick and whom we wish well. I have added a second picture by Faisal as I love its simplicity.  The light catches three key elements: the lower left quarter of the woman’s smiling face, the determined hand gripping the steering wheel, and the rear-view mirror. A full selection of picture from IWD from around the world can be seen here 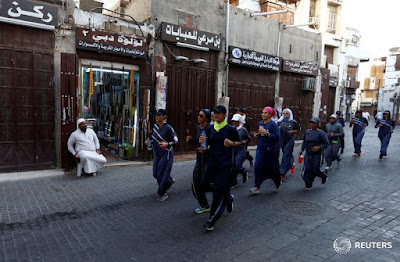 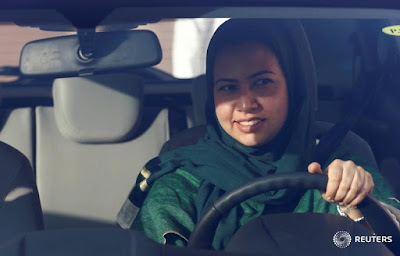 A Saudi woman sits in a car during a driving training at a university in Jeddah, Saudi Arabia March 7, 2018. REUTERS/Faisal Al Nasser

It takes a while to make visual sense of Mohamed al-Sayaghi’s picture. Your eye darts about, looking at the splashes of colour, the blue sky and then the yellow, red and orange in the foreground. Your eye then settles on the destroyed building and finally on the three women struggling across the rubble with their water containers. 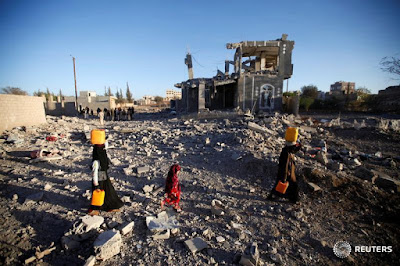 People carry water tanks as they walk at the site of damage after a Saudi-led air strike, north of Yemen's capital Sanaa, March 8, 2018. REUTERS/Mohamed al-Sayaghi